THE THREE-YEAR-LONG and seemingly never-ending Slovak story of Algerian terrorist suspect and asylum seeker Mustafa Labsi ended in the blink of an eye in late April. Following a series of administrative decisions, the Slovak authorities deported Labsi to Algeria before the public had chance to realise what was actually happening. News about the definitive rejection of his asylum request was accompanied by vehement protests by his lawyers and human-rights activists. But the Slovak Interior Ministry maintained a consistent response to the criticism: safety first. 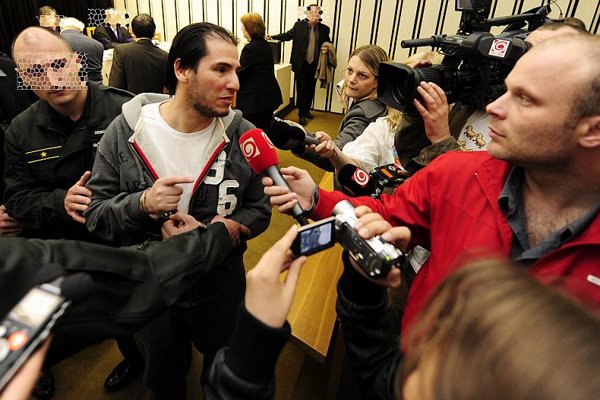 THE THREE-YEAR-LONG and seemingly never-ending Slovak story of Algerian terrorist suspect and asylum seeker Mustafa Labsi ended in the blink of an eye in late April. Following a series of administrative decisions, the Slovak authorities deported Labsi to Algeria before the public had chance to realise what was actually happening. News about the definitive rejection of his asylum request was accompanied by vehement protests by his lawyers and human-rights activists. But the Slovak Interior Ministry maintained a consistent response to the criticism: safety first.

On April 22 Interior Minister Robert Kaliňák informed the media that the failed asylum seeker Mustafa Labsi had been expelled from the country and escorted to Algeria. The decision came after a Supreme Court ruling on March 30 in which it confirmed a ruling by the Regional Court in Bratislava dismissing Labsi’s asylum request.

Kaliňák stressed that Labsi had been sentenced in Algeria and in France on counterfeiting and terrorism charges.

“It’s a victory of common sense and a guarantee of safety for our citizens,” Kaliňák said, as quoted by the SITA newswire, adding that he could not allow a man convicted of terrorism to move freely in Slovakia.

“For us the most important thing is that in the last four years we had enough opportunities to check the situation around Mr. Labsi, who several times abused the right of asylum and was several times rightfully sentenced for crimes,” he stated.

Labsi’s attorney Martin Škamla was surprised by the decision of the Slovak authorities. He said that they had acted in contradiction to rulings by independent local courts – the Constitutional Court and the Supreme Court – which had both previously ruled that Labsi should not be extradited to Algeria, where he might face inhuman treatment and torture, SITA reported.

According to Kaliňák there is no threat of Mustafa Labsi suffering the death penalty in Algeria. Slovakia has accepted guarantees from the Algerian government that he will not face the threat of torture or death, SITA reported.

“The diplomatic guarantees that Interior Minister Robert Kaliňák refers to cannot be considered decisive, something which was confirmed in the past also by the Constitutional Court of the Slovak Republic,” reads the statement by Amnesty International on the case, provided to The Slovak Spectator by AIS director Branislav Tichý. “Slovakia thus becomes jointly responsible for the future fate of Mustafa Labsi in Algeria, where he is under the threat of an unjust court trial and eventual death penalty.”

Another attorney who represented Labsi, Mária Kolíková, said Algeria’s assurances alone do not represent a guarantee.

“Diplomatic guarantees without real evidence that the country observes a ban on torture are only worthless paper,” she told The Slovak Spectator, adding that there are serious suspicions, voiced not just in reports by the United Nations and Amnesty International, but by countries such as the USA and the UK, that Algeria uses torture in criminal proceedings.

Škamla said that by expelling Labsi Slovakia had violated a preliminary measure issued by the European Court for Human Rights (ECHR) in Strasbourg, which was intended to protect Labsi from being expelled to Algeria, where he might face inhuman treatment or even the death penalty.

“By not respecting this measure, human rights in Slovakia were gravely violated regardless of the person they apply to,” Škamla said, as quoted by SITA.

The preliminary measure, which was supposed to protect Labsi from a forced return to Algeria, was issued by the ECHR on July 18, 2008. The initiative for such a measure came from Kolíková, who complained to the court based on her concern that Slovakia might not follow the proper process.

“The circumstances then were the same as they are today,” Kolíková told The Slovak Spectator, referring to her initiative at the ECHR. “Despite the fact that the Constitutional Court and the Supreme Court had ruled that expelling Mr. Labsi to Algeria was impermissible, at the same time there was a ruling to expel him, with Algeria as the possible destination. That is why we asked for preliminary protection, to prevent unpredictable actions by the government that could mean Mr. Labsi would not be able to turn to the European court.”

Marica Pirošíková, Slovakia’s representative at the ECHR, told The Slovak Spectator that when issuing the measure the court pointed out that ignoring the measure could mean that Slovakia had thereby violated the right to an individual complaint. This right is guaranteed by article 34 of the Convention for the Protection of Human Rights and Fundamental Freedoms.

The chairpersons of two committees of the Parliamentary Assembly of the Council of Europe (PACE) expressed "shock and concern" at the Slovak authorities' decision.

“This is a case in which there exists an imminent risk of irreparable damage to the applicant,” said Christos Pourgourides, chair of PACE’s Committee on Legal Affairs and Human Rights, and John Greenway, chair of the Committee on Migration, Refugees and Population.

“Such action directly undermines the authority of the Strasbourg Court at a time when all member states have just reiterated their attachment to the Court,” they added, describing the deportation as "an unacceptable disregard of European Convention on Human Rights requirements".

Mustafa Labsi’s Slovak odyssey began in May 2007, when Slovak police detained him on the basis of an Algerian arrest warrant, when he came to Slovakia to join his wife, who is a Slovak citizen. She and Labsi have a child. The following chronology of the case was compiled from TASR newswire reports.

The Algerian authorities alleged that Labsi belonged to the North African branch of Al-Qaeda, and that he had committed document falsification and terrorism crimes. They requested that Slovakia hand him over.

Meanwhile, Labsi asked for asylum in France, Austria, the UK and Slovakia. Since then, his case has remained subject to Slovak migration authorities and Slovak courts. In October 2007 the Migration Office of the Interior Ministry dismissed his asylum request. He did not appeal against this and so his case was passed to the Regional Court in Bratislava, which in November 2007 decided to expel Labsi to Algeria. Labsi appealed against that ruling.

Based on his appeal, the ruling was then cancelled by the Supreme Court in January 2008, but at the same time it left open the possibility that Labsi could be expelled.

In March 2008 the Constitutional Court ruled that the expulsion of Labsi to Algeria should be postponed. Labsi’s attorneys called it a key event for their client’s protection. The decision was also welcomed by the representation of the UN High Commissioner for Refugees in Slovakia.

In July 2008 the ECHR intervened with its preliminary measure, after which Slovakia’s Supreme Court ruled Labsi should be released from prison. Upon leaving prison, Labsi was arrested by the Foreigners’ Police, a decision which the Supreme Court, in January 2009, subsequently approved, since Labsi did not possess the appropriate Slovak visa.

In October 2008 Labsi again requested asylum in Slovakia, but his request was dismissed by the Migration Office and later, in October 2009, by the Regional Court in Bratislava.

In December 2009 Labsi escaped from a Slovak refugee camp and went to Austria, where he was detained by police and later returned to Slovakia. He returned in March 2010 in time to hear the Supreme Court, on March 30, confirm the dismissal of his asylum request, following which he was extradited to Algeria.