ON TOUR, a comedy by Mathieu Amalric that followed an American troupe of real-life burlesque dancers as they toured French port cities, will mark the April 13 opening of the 13th year of the International Francophone Film Festival (FIFFBA). 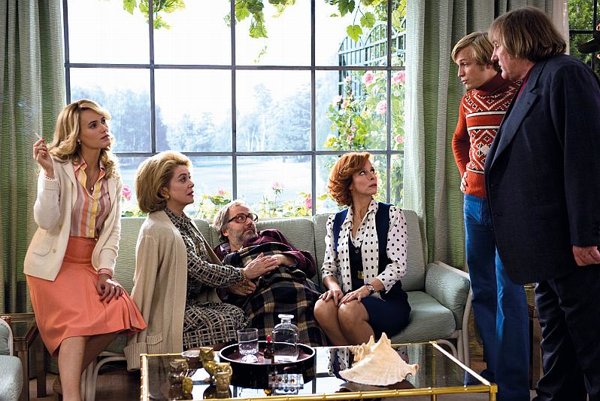 French film legends Catherine Deneuve and Gérard Depardieu star in Potiche (above), which will get an opena-air screening in Hviezdoslavovo Square in Bratislava on April 15 as part of the International Francophone Film Festival. (Source: Courtesy of FIFFBA)
Font size:A-|A+0

ON TOUR, a comedy by Mathieu Amalric that followed an American troupe of real-life burlesque dancers as they toured French port cities, will mark the April 13 opening of the 13th year of the International Francophone Film Festival (FIFFBA).

The five-day event held in Bratislava between April 13 and 17, co-organised by the FIFFBA association and the French Institute in Bratislava, will screen around 30 feature and short films partly or entirely produced in France or French-speaking countries such as Switzerland, Belgium, Morocco and Tunisia. Those who do not understand French need not despair – all movies will be subtitled in both Slovak and English.

The atmosphere of the festival, which typically attracts several thousand visitors, will be different from the previous editions, as the FIFFBA is changing venues to reach an even wider audience, its organisers said.

“We are confident that our fans will appreciate that, for the first time in years, the FIFFBA takes place in town instead of at the cineplexes,” Eva Porubanová, the festival’s artistic director, told The Slovak Spectator.

In fact, the screenings will take place simultaneously at the VŠMU Film & TV Faculty, Mladosť Cinema and the Slovak National Gallery.

As Porubanová further stated, a cherry on top will be the April 15 screening of Potiche, a comedy by François Ozon about the submissive wife (Catherine Deneuve) of a rich industrialist (Gérard Depardieu) who runs his umbrella factory with an iron fist. This movie will be shown in Hviezdoslavovo Square, under the open sky.

Other films in the programme include Black Venus by Abdellatif Kechiche, relating the real story of a black domestic servant who left her native South Africa for London only to be exhibited there in a humiliating carnival show; Xavier Beauvois’ award-winning Of Gods and Men, about the 1996 massacre of French Trappist monks living in a monastery in Algeria; and Heartbeats, a love drama by Canadian director Xavier Dolan.

Insomniacs and those who are too busy to watch movies during the day can also look forward to an all-night film marathon held at the Mladosť Cinema that starts at 23:00 on Friday night, April 15, and finishes shortly after 7:00 on Saturday morning.

Throughout the festival, several films will be presented in person by their directors and film crew members. The main guest of the event is the young French actor Louis Garrel, primarily known for his appearance in Bernardo Bertolucci’s The Dreamers.

In addition, with the festival having the ambition to enable dialogue between film professionals and audiences, the organisers have prepared a public panel discussion focused on the dismal situation of Slovak art-house cinemas. The discussion will take place at the VŠMU Film & TV Faculty at Svoradova Street on April 14 at 18:30.

According to Guillaume Robert, cultural counsellor at the French Embassy in Slovakia and director of the French Institute, the FIFFBA has become “one of the most important cultural rendezvous between Slovakia and France” over the 13 years of its existence.

“One of the many things the two countries have in common is the desire to support contemporary arts and encourage people to express themselves through culture,” Robert told The Slovak Spectator.

“It is therefore only natural that we have joined to promote interest in cinema by offering the local audience a programme of the highest quality, which blends a great cultural variety. I know we have just entered the second decade, but I cannot help looking forward to celebrating the festival’s 20th birthday.”

Admission to individual screenings is €3. A festival pass is €15 if purchased before April 13 and €20 if purchased after that date. More information on the festival is available at www.fiffba.sk.