IT MAY take several months until Jozef Čentéš, elected as Slovakia’s next general prosecutor in a secret ballot vote in parliament on June 17, will be able to occupy one of Slovakia’s most powerful public positions. President Ivan Gašparovič announced that he will not appoint Čentéš, the ruling coalition’s candidate, until the country’s Constitutional Court rules about the constitutionality of the previous action by MPs that modified the rules of parliamentary order to change the voting method for choosing the general prosecutor from a secret ballot to a public, recorded ballot. 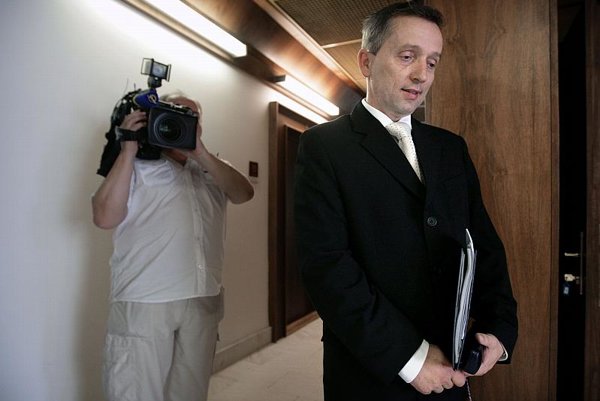 Čentéš was elected GP but has yet to be appointed. (Source: Sme - Tomáš Benedikovič)
Font size:A-|A+0

IT MAY take several months until Jozef Čentéš, elected as Slovakia’s next general prosecutor in a secret ballot vote in parliament on June 17, will be able to occupy one of Slovakia’s most powerful public positions. President Ivan Gašparovič announced that he will not appoint Čentéš, the ruling coalition’s candidate, until the country’s Constitutional Court rules about the constitutionality of the previous action by MPs that modified the rules of parliamentary order to change the voting method for choosing the general prosecutor from a secret ballot to a public, recorded ballot.

MPs from the opposition Smer party had boycotted the parliamentary session and Smer called the vote a black day in the country’s history.

Čentéš received 79 votes from the 80 lawmakers present, which in the end was actually conducted by secret ballot. The Speaker of Parliament, Richard Sulík, stated that he believes it is Gašparovič’s constitutional duty to forthwith appoint Čentéš as general prosecutor.

“He was elected in line with all the valid rules,” Sulík stated, as quoted by the TASR newswire, adding that the president’s rationale that he wants to wait for the Constitutional Court ruling is not justified.

Meanwhile, the chairwoman of the Constitutional Court, Ivetta Macejková, confirmed to public-service Slovak Television that the court will act on the legal challenge in September.

On June 15 the Constitutional Court issued a provisional ruling that suspended the validity of the change in the rules of parliamentary order until the court had reached a definitive verdict on the constitutional merits of parliament’s change in the voting procedure. However, the court’s provisional ruling did not specifically reinstate the previous parliamentary rules that had governed past secret ballots, meaning that there was a kind of legal limbo about the process that should be followed to select the person to fill one of the country’s most high-level public positions.

The legislation that changed the parliamentary rules, passed by the MPs from the four-party coalition led by Iveta Radičová, was challenged before the court by the acting general prosecutor, Ladislav Tichý. Tichý, an assistant prosecutor, advanced to the interim position of general prosecutor when the term of Dobroslav Trnka expired in February. The court’s decision has the effect of allowing Tichý and Trnka (who was appointed Tichý’s deputy in February) to remain in control of the General Prosecutor’s Office for an indefinite period.

A court’s ruling must be officially published in the country’s collection of laws in order for it to become effective and the ruling coalition, according to the Sme daily, used this time gap to hold the vote on June 17 because the court’s decision had been announced but not yet been published.

“The only thing the Constitutional Court objected to was the institution of an open vote, but we voted in a secret ballot,” Sulík argued, noting that he understands that the opposition does not like the fact that Čentéš was elected.

“Mr. President is convinced that neither the elected Jozef Čentéš nor Dobroslav Trnka should be candidates and be elected to the position of prosecutor general,” Trubač said, as quoted by the SITA newswire. “Today they both are so politically separated that no one can predict that they will not decide in favour of one or the other of these political parties.”

Smer had backed the bid of the previous general prosecutor, Trnka, for another seven-year term but Prime Minister Radičová strongly opposed Trnka’s return and had on several occasions stated she would resign if Trnka would be re-elected by MPs.

Trnka withdrew his candidacy shortly before the vote on June 17 based on what he called an “unconstitutional situation”.

“This day can be compared to the Night of the Long Knives on November 3, 1994,” said Fico, the chairman of Smer, as quoted by TASR, referring to the date when Vladimír Mečiar's Movement for a Democratic Slovakia (HZDS) seized power in all parliamentary committees and completely eliminated opposition parties from any influence in the committees.

Fico stated that Čentéš will only serve the interests of the ruling coalition parties and this will destroy the independence of the General Prosecutor’s Office. The Smer chairman said his party will do everything possible to make sure that a general prosecutor is elected by another secret vote, thereby restoring the independence of the office.

Čentéš said his vision of managing the General Prosecutor’s Office is different from how Trnka had managed it. Čentéš indicated he would not replace all prosecutors but would initiate certain selection procedures. Čentéš refused to comment on whether Trnka would be offered a position in the prosecutor’s office, saying that he does not want to build the office around particular names but rather so that it becomes more functional, SITA reported.

Čentéš stressed that talking about filling positions is premature.

“I have not promised any prosecutors any positions at the General Prosecutor’s Office,” Čentéš stated.