THE DISASTER at Japan’s Fukushima nuclear power plant, after multiple meltdowns in the aftermath of an earthquake and a tsunami a year ago, spurred extensive testing of nuclear power plants across Europe, including those in Slovakia. The country’s four operating nuclear reactors as well as two reactors under construction underwent stress tests last year as ordered by Slovakia’s Nuclear Regulatory Authority (ÚJD) which then prepared and submitted a final national report to the European Commission by the deadline of December 31. 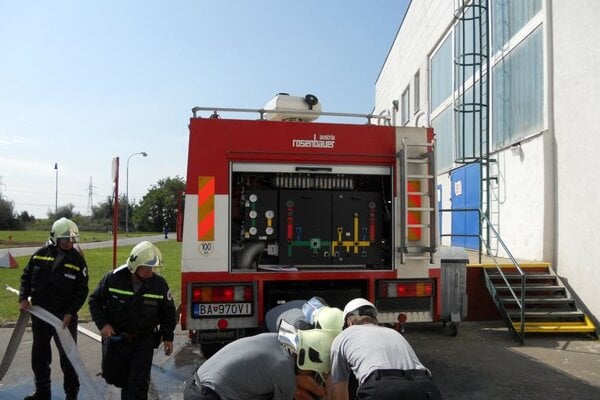 Part of the stress tests at Bohunice. (Source: Courtesy of ÚJD)
Font size:A-|A+

THE DISASTER at Japan’s Fukushima nuclear power plant, after multiple meltdowns in the aftermath of an earthquake and a tsunami a year ago, spurred extensive testing of nuclear power plants across Europe, including those in Slovakia. The country’s four operating nuclear reactors as well as two reactors under construction underwent stress tests last year as ordered by Slovakia’s Nuclear Regulatory Authority (ÚJD) which then prepared and submitted a final national report to the European Commission by the deadline of December 31.

The oversight process continued with a public hearing held in Bratislava on January 23 involving experts and the general public that had been preceded by a similar event, organised by the European Union, in Brussels on January 17. Meetings with the general public are an important means to present the results of the stress tests and they permit two-way discussion about citizens’ concerns.

The public hearing, organised by the ÚJD at Bratislava’s Bôrik hotel, provided information about the methodology of the stress tests, the conclusions reached by the ÚJD, and the continuing assessment process that will proceed at an international level. Over 120 people attended the event along with ÚJD representatives and officials from Slovenské Elektrárne (SE), the operator of nuclear power plants in Slovakia.

SE operates two nuclear power plants with two reactors each in Jaslovské Bohunice and in Mochovce. SE is constructing two additional reactors in Mochovce and these were also part of the stress tests. All of the reactors in Slovakia are Russian-designed VVER 440/V-213 units with an installed capacity of 440 MW each. There were originally four reactors at Jaslovské Bohunice but Slovakia ordered two of them to close in 2006 and 2008 as part of the Slovakia’s accession agreement with the EU in 2004. These facilities are currently being decommissioned.

The 9.0-magnitude earthquake and resultant tsunami that struck the Fukushima nuclear complex on March 11, 2011 prompted the European Council to adopt a resolution at its session on March 24 and 25 that required all nuclear power plants within the European Union to conduct stress tests with the goal to comprehensively assess risks and safety systems. The European Commission coordinated the work of institutions in the EU and will submit an overall report to the European Council based on the national reports.

The European Nuclear Safety Regulators Group (ENSREG), in cooperation with the EC, based on information garnered from the Fukushima accident and expertise from the Western European Nuclear Regulators Association (WENRA) prepared the methodology for the stress tests and is preparing the final report. The 15 EU countries that operate nuclear power plants were required to deliver final national reports by December 31, 2011, and Switzerland and Ukraine participated in the process as well even though they are not members of the EU.

The stress tests of the two facilities in Slovakia started on June 1 last year and SE delivered an interim report to the ÚJD in August followed by the final report in December. Slovakia’s nuclear authority then prepared the final report that describes the current safety systems at the plants, the testing processes and methodology, and information gained from what went wrong at Fukushima.
The final report for Slovakia is available at the ÚJD website, www.ujd.gov.sk.

The detailed report analysed extreme external events that could impact the safety of the nuclear power plants such as earthquakes, flooding, extreme meteorological conditions, loss of electrical power and loss of ultimate heat sink, as well as severe accident management and a combination of events accompanied by a loss of cooling water and electric power as well as a monumental accident that could hypothetically occur at a nuclear power plant.

The final report submitted by the ÚJD states that the stress tests in Slovakia did not identify any deficiencies that require immediate action such as reducing the power output of the nuclear reactors or cessation of their operation. Though the stress tests did not reveal any current technological or environmental risks at the Slovak facilities they did contribute to improvement of nuclear safety because of the comprehensive nature of the tests.

The stress-test process will continue in 2012 with European peer reviews of each country’s reports.
Last year’s EU-mandated stress tests were not a one-off safety review, as Slovak legislation requires nuclear power plants to undergo safety assessments every 10 years. Jaslovské Bohunice had its last assessment in 2008 and Mochovce was reviewed in 2009. These national assessments are done to ensure that safety systems are in accordance with up-to-date safety standards and the current level of scientific and technological knowledge. In addition to these national reviews, Slovakia’s nuclear power plants are also subject to regular reviews by several international organisations.
Comparison of the ÚJD report with the requirements of ENSREG and the EC indicates that the stress tests of the Slovak nuclear power stations were conducted in accordance with the EC’s regulations and it is likely that the EC will accept them as complete. The stress tests show that the operating nuclear power plants in Slovakia as well as the two new reactors under construction in Mochovce meet international safety requirements.

Pavel Povinec is a professor at the Faculty of Mathematics, Physics and Informatics of Comenius University in Bratislava