“THE SMER party enters our political history by this act,” stated Slovak President Ivan Gašparovič in formally installing Robert Fico as prime minister to lead his cabinet and the country for the next four years. Fico said he will not promise any “castles in the air” but rather a government programme that will result from intensive dialogue and work between government officials and a wide circle of social partners. 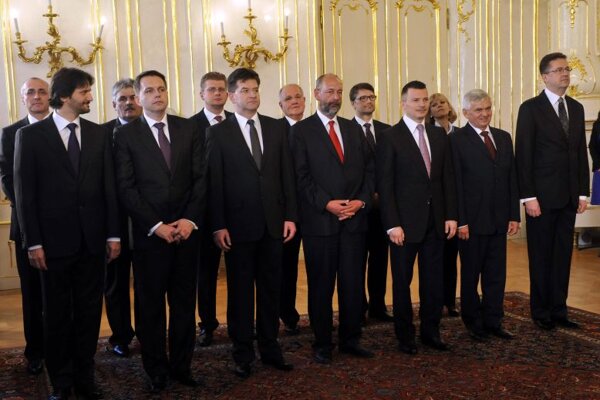 “THE SMER party enters our political history by this act,” stated Slovak President Ivan Gašparovič in formally installing Robert Fico as prime minister to lead his cabinet and the country for the next four years. Fico said he will not promise any “castles in the air” but rather a government programme that will result from intensive dialogue and work between government officials and a wide circle of social partners.

Fico, whose party now dominates parliament, brought four non-partisan ministers into the cabinet and also stated he is offering social reconciliation to the nation. The prime minister admitted that his government must operate within the limits of economic reality, which he said is not very favourable at the moment, as well as an EU requirement to reduce the country’s public deficit to 3 percent of GDP in the coming years. But Fico promised maximum efforts to make sure that improving the country’s public finances does not primarily affect people with low or mid-scale incomes.

“We want to protect these people while we expect more solidarity from the rich,” Fico stated, as quoted by TASR newswire.

Gašparovič called on the new government to institute a dialogue with opposition parties and local and regional governments as well as the foreign community but emphasised “first of all the citizens”. The president said the new government is facing challenging times.

“I know it will not be easy for you at all, but what is not difficult in today’s world?” the president stated, as quoted by TASR.

Earlier on April 4 deputies in the new 150-member parliament took their formal oath, now translating the results of the March 10 parliamentary elections into the real life of the country. After its landslide victory, Smer holds 83 seats, a majority of 16 over the five other parties in parliament: the Christian Democratic Movement (KDH) and the Ordinary People and Independent Personalities (OĽaNO) party each have 16 seats; Most-Híd has 13 seats; while the Slovak Democratic and Christian Union (SDKÚ) and Freedom and Solidarity (SaS) each occupy 11 seats.

After introducing Tomáš Malatinský, the former head of the Association of Employers’ Unions and Associations (AZZZ), as the country’s next economy minister, Fico completed announcing the names of other cabinet members selected in a three-week-long process.

The nomination of Tomáš Borec, the chairman of the Slovak Bar Association, to the post of justice minister has evoked positive responses as a non-partisan choice. Two other non-partisan nominees are Miroslav Lajčák, who is leaving his high-profile EU position to head Slovakia’s Foreign Ministry, and Zuzana Zvolenská, who served as chief executive of the privately-owned Dôvera public health insurance company as well as its state-owned counterpart, Všeobecná Zdravotná Poisťovna (VšZP), who becomes the new health minister.

Former finance minister Ján Počiatek heads the Ministry of Transport, Construction and Regional Development, which was given broader powers by the previous government and will now coordinate use of EU funds as well as the tourism agenda. Robert Kaliňák returns to his previous post as interior minister. Marek Maďarič reprises his role as culture minister while Dušan Čaplovič takes the reins at the Education Ministry. Peter Kažimír, the former state secretary (i.e. deputy minister) at the Finance Ministry is now the minister there. The country’s new defence minister is Martin Glváč, head of Smer’s Bratislava branch, and the Environment Ministry is in the hands of Peter Žiga, a former state secretary at the Economy Ministry and the head of Smer’s Košice branch. Former economy minister Ľubomír Jahnátek will now lead the Agriculture Ministry and the new labour minister is Ján Richter, who served as Smer’s general manager. The choices for incoming state secretaries will be finalised after the Easter holidays.

The appointment of the new cabinet meant the automatic departure of those serving in the past cabinet including outgoing prime minister Iveta Radičová, who announced in late 2011 that she would leave politics as well as her political party, the SDKÚ. Radičová will take a position as lecturer at St Antony’s, a graduate college of Oxford University that specialises in international relations, economics, political science, history and anthropology.

Zuzana Wienk, the head of the Fair-Play Alliance political ethics watchdog, was mostly critical of the composition of the new cabinet giving a positive nod only to Borec becoming justice minister, the SITA newswire reported.

“Overall, it is an expected, partisan selection,” Wienk told SITA. “Among the nominees are several names who, given their previous scandals or problems, or their negative results, should not be back in a government which presents itself as determined to fight corruption and a lack of transparency.”

Ján Baránek, a political analyst, said he considers the non-partisan appointments of Lajčák and Borec as positive, adding that it is necessary to wait and see whether Fico’s signals about a new style is only a “wolf-in-sheep’s-clothing” approach or becomes an expression of a new political culture, SITA reported.