SHORTLY before Easter, four brothers from Horovce broke the record for the longest korbáč, the whip woven from willow branches that is used by Slovak boys and men to ceremonially whip girls and women in their family and neighbourhood in an Easter Monday tradition. 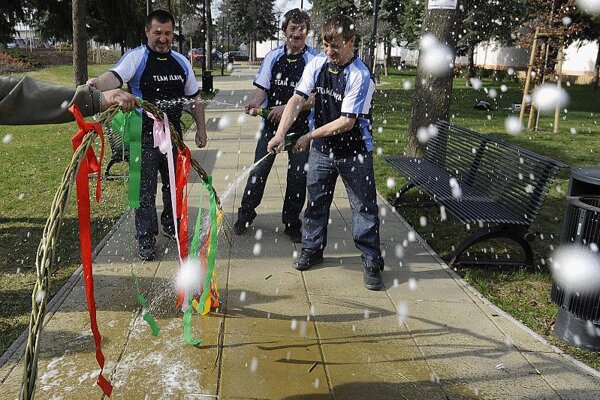 Three of the four Kováč brothers – Jaroslav, Ferdinand, and Vladimír – presented their work for measurement in Ilava on April 5 after they had spent nearly a week weaving their korbáč. It stretched for 106.2 metres and was named Slovakia’s longest korbáč and mostly likely the longest whip in the world, as this rather strange tradition is mostly confined to Slovakia and the Czech Republic. The brothers work routine was for one of them to constantly gather willow branches while the other three did the weaving.

“I dreamed of it,” Jaroslav told the SITA newswire. “I woke up and said I am going to set a record. I was going to ask my brothers but then had second thoughts. At that moment my wife nagged me, saying she knew I would give up. This provoked me so much that I started working.”
It might take a year for the brothers to meet the official requirements of the Guinness Book of World Records and to assure themselves of an entry they are considering weaving an even longer korbáč before the end of the year.