The Ottoman heritage in Slovakia

Novohrad, a region divided by state borders, tells many stories of the Slovak-Hungarian cohabitation, many of them peaceful, some of them not. 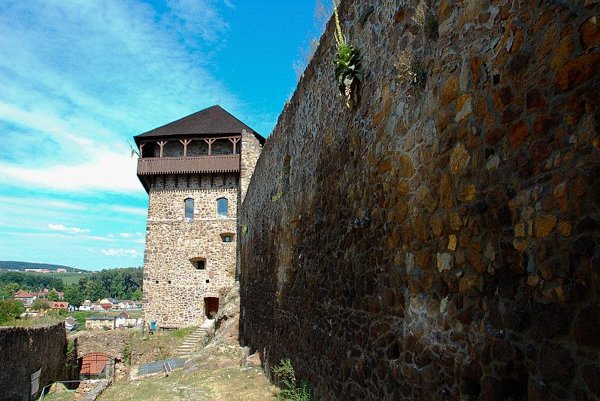 Fiľakovo Castle is one of a line of borderland castles each normally visible from the other. (Source: Emanuele Terenzani)
Font size:A-|A+  Comments disabled

Novohrad, a region divided by state borders, tells many stories of the Slovak-Hungarian cohabitation, many of them peaceful, some of them not.

Most contemporary tales of daily life reveal a place where ethnicity and borders are not what matters most, and cultures mix in schools, in the streets, and in the mixed Slovak-Hungarian families. However Fiľakovo , one of the traditional centres of the region (although today small in size and importance), tells a slightly different story.

Here, the tales date from a period when nations did not exist as we know them today, and the inhabitants of the region stood united against the Ottoman threat.

The landscape of Fiľakovo is dominated by Fiľakovo Castle, one of a line of borderland castles, each often visible from the other. (If you climb up the castle hill and to the top part of the ruins, you will spot a small peak on the horizon between two hills. That is a tower of Šomoška Castle, located on the border of Hungary and Slovakia, which, in turn, offers a sight of Salgó Castle in Hungary.)
The first written mention of the castle dates from 1242 and says that it provided a shelter for the Hungarian nobility from the Tartar attacks. This mention comes in a letter from the nobles to the Pope, in which they mention a total of 17 such castles.

The castle was built from stone in the first half of the 13th century making it one of the first stone castles in what is now Slovakia. Until then, wood had typically been used for fortifications.
The history of the castle highlights the name of the Bebek family during whose rule in the 16th century the most significant parts of the castle were built, including the tower called Bebek’s Bastion, which today houses a museum. The Bebeks also left the palm tree in the city coat of arms - perhaps unexpected in this part of Europe - because it was the original symbol of the family.

Surprisingly enough, the castle of Fiľakovo (of which only ruins remained; the tower was reconstructed to serve as the museum) has managed to pique interest as far away as in Turkey and it might well be that in the future Turkish tourists will visit, to see the northernmost reaches of the former Ottoman Empire.

“The Turks today are quite proud of the fact that their empire once reached here,” said Attila Agócs, the director of the castle museum. He also said that Fiľakovo is now close to signing a treaty of cooperation with two Turkish cities, Enez and Edirne.

Although the castle now bears no traces of its former occupants, Ottoman troops controlled the castle between 1554–1593. A legend from that time tells of a hostage at the castle, a Saracen called Etiops, who told the invaders about an unprotected window which was used to deposit rubbish outside. Acting on this intelligence, the Ottomans entered the castle through the window and thus captured the castle top-down, and not bottom-up as was more common. The legend also states that the Ottomans were able to overpower a drunk castle crew and turn their own weapons against them. (The only established fact is that the then-castle captain János was at a wedding in Gemer.)

These days, there is an educational path up the castle hill, with texts in Slovak, Hungarian, and English. Besides the obligatory cases containing archaeological findings from the area, and artefacts from the castle’s history (including the original keys) the museum also has an exhibition of the daily life of people in Novohrad, which shows the parallels in folk art.

“We are trying to show that the Slovak-Hungarian cohabitation is a normal, daily life of people in this region,” Agócs said. In Fiľakovo, about 70 percent of the people are ethnic Hungarians.

Fiľakovo is a good venue for a day trip in combination with a visit to the ruins of Šomoška Castle on the Slovak-Hungarian border, only 16 km away. Lučenec, the economic and cultural centre of the region, is perhaps the best place to stay for the night.