Economy still growing, but only just

THOUGH growing at a slightly slower pace than it did in the first three months of the previous year, Slovakia’s economy in the first quarter of 2013 managed to avoid recession, unlike some of its neighbours, including France – the eurozone’s second biggest economy. While, the Slovak economy grew only slightly faster in the first quarter of 2013 than during the last three months of 2012, climbing from 0.1 percent to 0.3 percent, when compared to its performance in the same period last year, Slovakia’s economy posted 0.6 percent growth, down from 0.7 percent, according to a flash estimate of the statistics authority released on May 15. 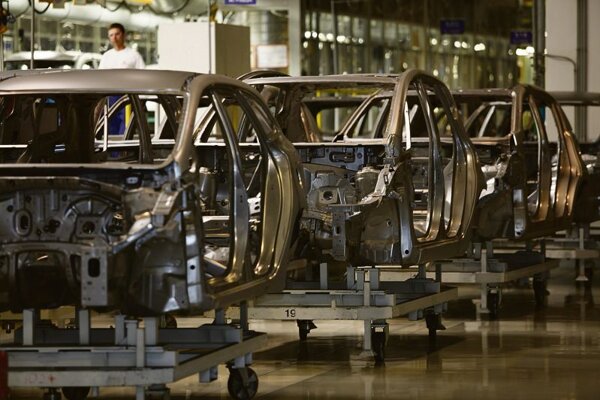 THOUGH growing at a slightly slower pace than it did in the first three months of the previous year, Slovakia’s economy in the first quarter of 2013 managed to avoid recession, unlike some of its neighbours, including France – the eurozone’s second biggest economy. While, the Slovak economy grew only slightly faster in the first quarter of 2013 than during the last three months of 2012, climbing from 0.1 percent to 0.3 percent, when compared to its performance in the same period last year, Slovakia’s economy posted 0.6 percent growth, down from 0.7 percent, according to a flash estimate of the statistics authority released on May 15.

At current prices, the volume of GDP in the first quarter reached €16.817 billion, 1.6 percent up compared to the same period last year, the Slovak Statistics Office reported, adding that detailed GDP results will be available on June 5.

Yet, market watchers assume that the economic growth might be driven entirely by foreign demand.
The performance of the Slovak economy in the first quarter of 2013 was nevertheless the weakest since 2009, when the crisis hit, while a similarly slow rate of growth was recorded in the last quarter of 2012, noted Eva Sadovská, an analyst with Poštová Banka, in response to the flash estimate.

“Despite the noticeable slowdown at the end of last year and in the beginning of 2013, Slovakia’s economy is not in recession, which already last year was squeezing more than a third of the countries of the EU,” Sadovská wrote in a memo, adding that even the eurozone and the EU as a whole recorded a drop in GDP during several subsequent quarters.

Martin Baláž of Slovenská Sporiteľňa noted that in the fourth quarter the major economies of the EU grew moderately slower than expected, adding that the German economy grew at 0.1 percent compared with the previous quarter, while the market had expected it to grow by 0.3 percent. The French economy recorded a further quarter-on-quarter contraction of 0.2 percent, Baláž said.

Slovakia’s neighbours, however, also recorded negative growth. The economy of the Czech Republic contracted by 1.9 percent in the first quarter of 2013 , with the market expecting a contraction of 1.3 percent, according to Baláž. On the contrary, however, the drop in the Hungarian economy was slower than originally expected when it posted a 0.9 percent contraction compared to the previous year’s first quarter when it contracted by by 2.9 percent.

According to Sadovská, the slowdown in the first quarter was more or less expected since weakening foreign demand was taking its toll on industrial producers, who had already reported weaker numbers.
“Despite the fact that exports and imports did not grow at the same pace as last year, the positive foreign trade balance in the first quarter has made a positive contribution to GDP growth,” Sadovská said.

Her fellow analyst, Baláž, agreed, adding that economic indicators suggest a positive development in foreign trade at the beginning of this year, which suggests that “exports will be, similarly to last year, the sole components of GDP with a positive contribution to the growth”.

Andrej Arady, macroeconomist with VÚB Banka, said that although the detailed GDP data will be available only in early June, none of the monthly indicators of domestic demand suggest its revival. Sadovská does not assume either that domestic consumption has made any positive contribution to GDP due to what she called “the careful behaviour of consumers under the conditions of high unemployment rates”.

UniCredit Bank chief analyst Ľubomír Koršňák noted that domestic demand remains extremely weak in all sectors: this is indicated by the continuing drop in retail revenues, a drop in bank loans to non-financial enterprises and an annual drop in state budget expenditures.

According to Arady, the industrial sector was doing statistically slightly better than at the end of last year, but he attributes part of this revival to what he called a calendar effect: December’s production was, to a large degree, shifted to January this year, which contributed considerably to its quarter-on-quarter growth. Based on monthly data, construction production continued dropping, Arady said.

Economic sentiment in Slovakia remains relatively negative, mainly in the construction industry, Baláž said, adding that “on the contrary, sentiment in the industry over the last months has moderately improved, while the producers expect mainly higher demand from our foreign trade partners”.

“For the labour market, which is the sore spot of the Slovak economy, this reported growth was not enough to create jobs,” Arady commented, adding that the weak economic growth was paired with “legislative changes in the area of labour relations, which only strengthened the impact of the weaker than average economic growth”.

The employment numbers were significantly worse than the monthly data in selected branches of the economy suggested, said Koršňák, adding that these indicated a moderate year-on-year as well as month-on-month growth of employment.

Responding to the flash estimate for employment, Baláž said he assumes that domestic consumption will either remain unchanged in the first quarter or decline slightly.

Baláž assumes that for the whole of 2013 the economy could grow by 0.5 percent, but only if in the second half of the year the expected revival of the German economy brings higher demand for Slovak products.

Koršňák too expects a moderate revival of the economy in the second half of the year, fuelled by slightly strengthening foreign demand. However, a recovery of domestic consumption can be expected in the end of the year at the earliest, Koršňák added.