Indian cuisine: Greetings from the Land of Spices

CARDAMOM, carom seeds, cinnamon, cloves, coriander, cumin, fenugreek seeds, fennel, nigella, saffron, haldi, curry leaves, tamarind, dill and kokam are only a few of the spices typically found in India’s rich culinary palette. Since India’s cuisine is primarily vegetarian, Indians have traditionally used a lot of spices to make their food richer in flavour and in colour, Rajiva Misra, the Indian ambassador explained, while his family chef, Janardana Prasad, was preparing a dish which boasts a variety of spices: tandoori chicken.

Related: Indian cuisine I Main dish I Side dish I Other cuisines 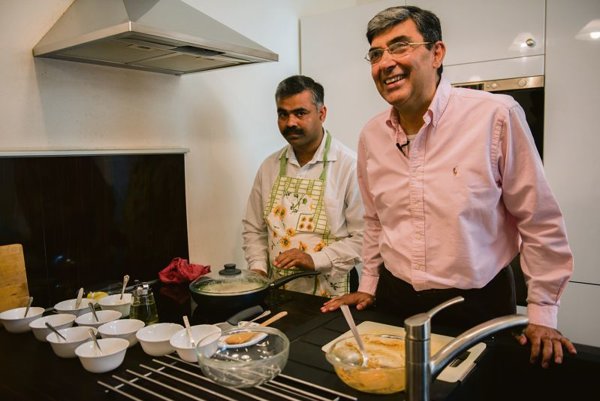 CARDAMOM, carom seeds, cinnamon, cloves, coriander, cumin, fenugreek seeds, fennel, nigella, saffron, haldi, curry leaves, tamarind, dill and kokam are only a few of the spices typically found in India’s rich culinary palette. Since India’s cuisine is primarily vegetarian, Indians have traditionally used a lot of spices to make their food richer in flavour and in colour, Rajiva Misra, the Indian ambassador explained, while his family chef, Janardana Prasad, was preparing a dish which boasts a variety of spices: tandoori chicken.

The popular dish, which is marinated for at least eight hours overnight in yogurt, lemon juice, and plenty of spices, and then grilled or broiled, comes from the region of northern India, but has become very popular in other parts of the country as well as abroad, especially in places with large Indian expat populations, Misra said.

Tandoori chicken, marinated in yogurt and seasoned with garlic, ginger root, ground cumin, coriander, cardamom and cayenne pepper, among other spices, was traditionally cooked in coal fired clay ovens that were dug into the ground, but today the dish is more commonly prepared at home in conventional electric ovens, according to the ambassador. Misra added, however, that one can make tandoori without meat, using cottage cheese, potatoes or other vegetables instead.

Matar pulao, or rice with peas, is both fragrant and a perfect complement to kebabs and tandoori meats, Misra explained, adding that it is quite popular in India, Pakistan, Iran, and even in some parts of Turkey. The ambassador noted that in India long-grained basmati rice is used to prepare the dish.

While some Indian restaurants and chefs preparing Indian food have a tendency to tone down the hot spices to offer a milder culinary experience for local palettes, the Indian ambassador says that some Slovaks seem up to the spiciest Indian experience.

“With our guests, we’ve generally been careful about spices and chilli, but I often find that perhaps our food may have been too bland for our guests, who expected more authentic Indian food,” Misra said.

The wide array of spices the ambassador, his wife Amita, and Prasad chose for the dishes they prepared for the Cooking with Ambassadors programme in late April, are widely available here in Slovakia. However, promoting Indian food in Slovakia is not a challenging task for the Indian ambassador: he pointed out that there are already some Indian restaurants outside Bratislava – and noted that Slovaks are quite open to international culinary experiences.

“Slovaks are fond of Indian food; at least this is my impression,” Misra said, adding that “Slovaks, as I understand, are very adventurous about food, and therefore you have a large number of restaurants from different parts of the world in Bratislava, and I find them to be full all the time”.

When asked about which Indian dishes he prefers, the ambassador noted the richness and diversity of Indian cuisine, adding that he especially enjoys the cuisine of coastal southern India, which features a lot of seafood and is rather spicy.

“Kerala is the state in India which has the best spicy seafood,” the ambassador said, listing popular south-Indian specialities like dosas, which are made from fermented rice, and idlis, another rice dish, as well as semolina, which is traditionally eaten with vegetable curries and coconut chutney.

In terms of drinks that pair well with Indian food, the Ambassador noted that “there’s a little bit of cross-over with Slovakia” since the best “alcoholic drink to try with an Indian meal is beer”.
“I think it has to do with the fact that drinking wine with spicy food is not easy to match up, and India has a very warm climate for much of the year,” Misra said, adding that he likes Slovak beer very much.

However, Misra explained that Indians are not used to eating a lot of red meat in India, while a considerable part of Slovak cuisine consists of red meat, beef and pork, and this is partly “the reason why I do not eat Slovak food as much as I would like to”.

The ambassador however says his experiences of eating out in Slovakia have been exceptional: “I think for a city of this size, Bratislava has tremendous eating options – and some very good restaurants.”