Multiplying effects of the car industry

WHILE Slovakia’s strong focus on its robust automotive industry has been criticised by some economic experts, automotive producers argue that car production does not mean only assembling cars from imported parts, but also production and exports by local subcontractors, research and development, and innovation. A recently-released study by experts from the University of Economics in Bratislava has confirmed the automotive industry’s importance for Slovakia. 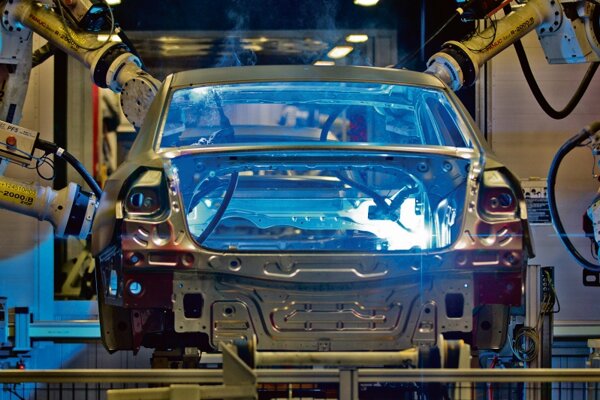 WHILE Slovakia’s strong focus on its robust automotive industry has been criticised by some economic experts, automotive producers argue that car production does not mean only assembling cars from imported parts, but also production and exports by local subcontractors, research and development, and innovation. A recently-released study by experts from the University of Economics in Bratislava has confirmed the automotive industry’s importance for Slovakia.

“These figures confirm that the decision made 20 years ago to focus on the automotive industry was correct,” Jozef Uhrík, the honorary chairman of the Automotive Industry Association (ZAP) said on June 21 when the study was presented.

Uhrík recalled that after the fall of the communist regime Slovakia’s defence industry was hit hard. Many companies were closed down, ousting hundreds of workers with specialised skills. With that historical setting the automotive industry turned out to be the best economic sector in which these workers could apply their skills and expertise.

The study of the automotive industry’s impact on Slovakia’s economy, which Mikuláš Luptáčik from the University of Economics in Bratislava and his colleagues conducted based on data provided by the Slovak Statistics Office, illustrates the multiplying effect of car production. Luptáčik explained that carmakers need goods and commodities worth €3.82 billion, including those that are imported, in order to manufacture €1 billion worth of cars. When imports are eliminated production generates €1.54 billion, which Luptáčik says is still a sound figure, but which leaves room for more local sub-contractors.

In the case of electronics and computers, production amounting to €1 billion requires goods and commodities worth €3.65 billion, or €1.39 billion excluding imports.

“The results show that one job with one of three carmakers in Slovakia generates four jobs for Slovak subcontractors,” said Luptáčik, adding that other jobs are generated through production of consumer goods, which auto industry workers purchase from the money they earn.

The added value generated per employee amounts to €75,000 for car manufacturers, and approximately €27,000 for industrial production in general.

Automotive industry in Slovakia and abroad

Ivan Hodač, the secretary general of the European Automobile Manufacturers Association (ACEA), praised Slovakia’s automotive industry, crediting the country’s already existing workforce and industrial infrastructure, as well as the support the Slovak governments provided to carmakers and subcontractors when they arrived in Slovakia, for its growth. But while in Slovakia growth in car production has been strong, the situation in Europe is the opposite.

“How does it look in Europe? Bad,” Hodač said. “Europe is going down in an incredible way.”

According to data of the ACEA, production and sales of cars in the EU continues to decrease. Hodač ascribes this negative development in the EU, despite continued growth in the global automotive industry, to decreasing competitiveness of the automotive industry in the EU compared with Asia and other parts of the world as well as the general economic situation in the EU.

On the occasion of its 20th anniversary ZAP summed up the development of the automotive industry in Slovakia. Slovakia has three major car producers: Volkswagen Slovakia in Bratislava, PSA Peugeot Citroën in Trnava and Kia Motors Slovakia in Teplička nad Váhom, and over 275 subcontractors. Over the last 20 years they manufactured a total of 6,093,189 cars. Car production increased by 310 times over 20 years, from 2,952 vehicles in 1993 to 926,555 in 2012. The latter figure, equalling 171 cars per 1,000 citizens, has made Slovakia the biggest per capita car producer in the world. The share of the automotive industry makes up 30.5 percent of the Slovakia’s industrial production.