“BRING me some potatoes to plant in Epirus.” This was one of the first diplomatic tasks that Nicolaos D. Kanellos, the Greek ambassador to Slovakia, received from his boss in Greece. So Kanellos did as asked and brought the president of Greece 25 kilos of potatoes from the garden of a woman in Skalica who had been planting potatoes for 15 years. 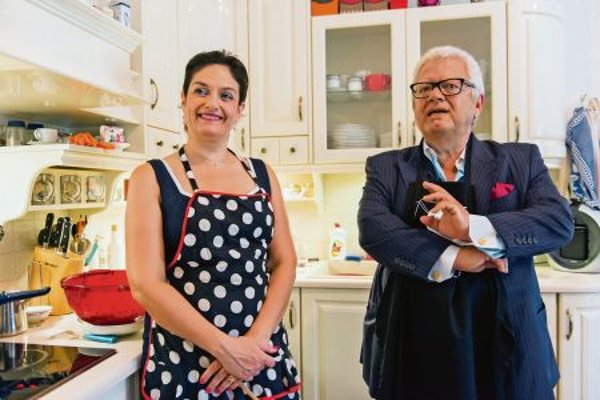 “Look how carefully she is handling the potatoes, as though they are eggs,” said Kanellos several years later while observing his wife Maria Karakanda Kanellos at their Bratislava residence stuffing boiled potatoes with one of the most typical Greek dishes, tzatziki, during the Cooking with Ambassadors programme.

Kanellos explained that he sees the way in which his wife fills the potatoes, with a stuffing mixture of anchovies and capers, as an expression of the act of love, “if you do not cook with love then it does not mean much”.

The Greek ambassador says he is proud of the cuisine of his homeland but quickly adds that “we do not have much publicity or promotion for our meals” while stating his opinion that these dishes are best if eaten in Greece.

For example, it would be foolish to eat halušky in Greece, said Kanellos, making reference to the Slovak national dish of halušky and the warmer climate of his homeland.

When Maria Kanellos starts working on the stuffed tomatoes and peppers, her husband explains that true Greek tomatoes cannot be produced en masse: that Greeks can perhaps have ten tomatoes per month in their garden but these are perfect tomatoes in what he called “a state of total paramorphosis”.

“Especially in the summer time, the most beautiful, juicy red tomatoes can be picked from Greek gardens,” Maria Kanellos continued in praise of Greek tomatoes while stuffing the tomatoes and peppers with a mixture of rice, feta cheese, delicately chopped onions, pine nuts, sugar, pepper, mint and parsley.

Before Kanellos started preparing yet another Greek dish he told the legend of Spartan soldiers who lived for many days on only very modest food, one fig per day and water, but still were full of strength. “I will try to cook something very Spartan today.”

Kanellos explained that ‘trahanas’ is a kind of primitive pasta that is a typical Greek dish usually served in the early morning or late at night after someone has stayed out late. It is completely home-made, according to Kanellos, using flour, milk and some bacon.

“If you are a politician and you want to get closer to people then you have to eat trahanas,” said Kanellos, while holding his favourite yellowish cap decorated with a black rooster.

Several sources suggest that trahanas is the oldest processed Mediterranean food, with Kanellos saying that trahanas is eaten everywhere in Greece and that it is commonly offered to good friends.

But Kanellos believes that the most important thing about Greek food is that it is served with love and a good mood. “If we don’t do that, we cannot say that our food is better than others. You have to spend a lot of time in your kitchen; nothing should be made in haste; you need patience in order for your food to be good.”

Kanellos added that if people want to taste good food they also must protect their environment and have respect for nature because “you cannot have quality ingredients and good fruits or vegetables or whatever you use for cooking without taking care of nature”.

As for the cuisines of other nations, Kanellos says he can appreciate food coming from different national kitchens but that he also tries to understand the people behind the cuisine.

“I am here to understand more, to live with the small secrets of Slovaks and love Slovaks more,” Kanellos said.

Kanellos believes that people should not only eat to survive but should also live well.
“We need to have free time to enjoy nice food and to share good wine or to drink some ouzo or slivovica in a Slovak home,” Kanellos said.