ENJOYING a taste of foreign culture while helping people in need seems a good idea, and the project HelpMEAT combines these very things in an effort to finance a day-care centre for Bratislava’s homeless. 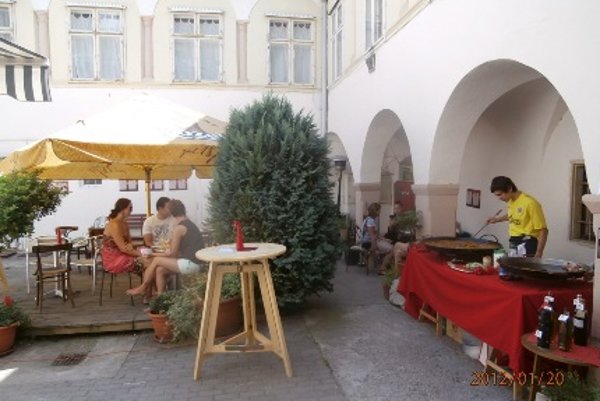 ENJOYING a taste of foreign culture while helping people in need seems a good idea, and the project HelpMEAT combines these very things in an effort to finance a day-care centre for Bratislava’s homeless.

“We, in the civic association Vagus, now work on a project called “Domec – House” which should be a daily integration centre for homeless people,” Sergej Kára of Vagus told The Slovak Spectator. “We plan to open it in autumn 2013 in the house in Mýtna Street, but we need a lot of money to reconstruct the building that has been deserted and dilapidating for year. The VÚB Foundation included us among projects within the €100,000 euro Nadácie VÚB – meaning that 10 projects will get the same amount from the VÚB Foundation that they are able to collect themselves in five months.

“We wanted to be more active in raising the money, and we started organising small gastronomic events that would be interesting for people and would be able to attract them, with all the admission fees would go for the House project.”

Kára explained that the first HelpMEAT event had an Iranian flavour, as the people from Vagus knew some Iranians willing to cook dinner and play traditional Persian music, “as we also want to make people learn something about the culture of the corresponding country”.

On August 4, the second such event took place, focusing on the Spanish cuisine and music. A certified expert of regional cuisine “Spanish chef”, Dušan Plichta, cooked for hungry visitors, and the El Moro music-dance association performed in the afternoon, as the summer heat eased up slightly. The Spanish Embassy to Slovakia helped promote the event. The admission for the meal –paella – and performance was €9. The event started at 13:00 in the Next Apache venue in Panneská Street, where all the events take place.

“We want to make two more HelpMEATs before the end of the high season,” Kára said. “The third one would be Italian, and we have to decide yet about the fourth one.”

The Vagus association plans to offer day-care services in the house on Mýtna street – for the estimated 4,000 homeless people in Bratislava. Hygiene facilities, snacks, places to sit, spend the day, medical treatment and psychological and social consultancy will be available. All homeless without conditions will be offered help and advice. Updated information on the HelpMEAT project and on other issues of streetwork and those homeless can be found (in Slovak) at www.vagus.sk.

“The whole idea of HelpMEAT is based on our assumption that people in Slovakia feel better when they not just give money – be it for a good cause – but also get something in return, to get a nice experience,” Kára said. “We also hope to attract people who, under different circumstances, would not show interest in the issue of homelessness. We talk to those who come to our events, and we offer information.”