THE MODERN dance theatre and school elledanse opened its new season in a big way with the three-day festival Focus Slovensko Israel. 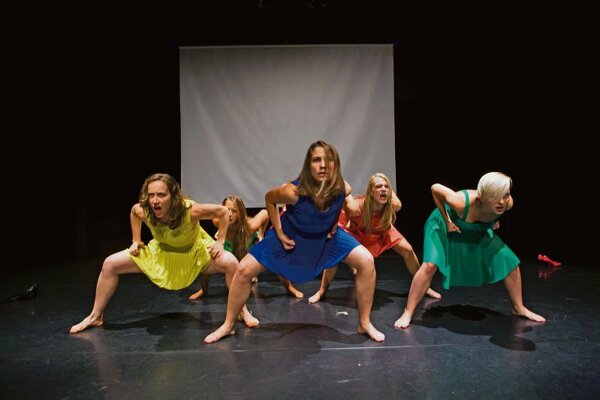 THE MODERN dance theatre and school elledanse opened its new season in a big way with the three-day festival Focus Slovensko Israel.

“This is the first time that we managed to organise such a foreign festival,” Šárka Ondrišová, the head of the theatre, told The Slovak Spectator. “The whole idea was born when we visited the International Exposure festival in Tel Aviv... I knew that within the Israeli-Slovak cultural exchange, no dance has been imported. So we chose to bring the smaller, more intimate productions ... to elaborate a three-part grant.”

The festival was comprised of five shows between September 6 and 8, a photo exhibition and a screening of a movie within the Human Family project. There was also a panel discussion on Israeli dance, two dance workshops, a stand-up comedy show and music.

On September 6, Israeli Ambassador to Slovakia Alexander Ben-Zvi opened the festival, which began with the launch of the exhibition of photos by Martin Črep and a documentary movie by Boris Bočev, both showing Israel within the Human Family project that comprises several countries. The project seeks to focus on the humane and compassionate side of people living in conflict-torn places.

The festival’s YouMake ReMake performance, choreographed and directed by Renana Raz, was inspired by the idea of bringing to life, or “re-making”, various bizarre videos from YouTube. “For me, the most inspiring things are people and stories. I cannot say that my inspiration comes from just music or just dance – this changes – and when I see or hear something, I hear a bell ringing in my mind. And sometimes, as in the case of YouMake ReMake, it is a conceptual issue,” she said.

Raz explained that she noticed that every social encounter she participated in ended up with a session watching videos on YouTube. But she said she did not want to bring her work to the computer – which she considers a “flat” medium – and sought to bring YouTube videos to her world instead, creating a dialogue between the “web and the stage”.

The short etudes are based on videos, sometimes mocking them outright, sometimes copying them with a slight shift in meaning, and enhancing and bringing them to a surprising catharsis in other cases. Maybe the funniest are the “Barbie Girls” mimicking the typical threatening dances of Maori rugby players, the female group training for the “face-lifting gymnastics” and a disco dancing lesson in Finnish with a deep “psychological and political” undercurrent.

Raz made the project in Israel, but now tours the world and teaches it to local dancers wherever she goes. France and the US are next on the list. “The vision behind this concept is simple: I can come to any country in the world, have a group of local artists and teach them this performance – because it consists of short sequences,” she told The Slovak Spectator. Most of the dance pieces are replicated everywhere, but occasionally new ones are added for each specific country. In Slovakia, the face gymnastics and the final part where dancers mimicked a parrot dancing to a certain rhythm were added.

A second dance performance at the festival, called Never the Less, was much more intimate, as a dramatic love duet explored the darker side of a close relationship, with all its ups and downs, infatuations and fears, dependences and attractions.

Choreographed and directed by Dafi Altabeb and performed by Olivia Court-Mesa and Yochai Ginton, it sent goose-bumps down the audience’s spines, serving as a mirror for everyone who dared to look into the depths of such a connection.

“I worked with them in a different project and when I saw the chemistry between them, which was amazing, I also felt they are able to express my feelings because they are both very emotional people,” Altabeb said of the piece. “I didn’t have to ask them anything or to explain emotionally. All three of us were able to expose ourselves and to tell our lives, our story; and to share the struggle in life.”

As for the music, which sometimes complements and sometimes contrasts with the development in the piece, Altabeb said: “I usually conceive the choreography and then search for music. For this piece, I asked three composers, two Israeli and one Belgian, and the first and the last musical part are composed specially for this show. The second part, by the Belgian author, already existed. The third part I heard at the wedding of my best friend – and the bridegroom’s brother was the author, so he adapted it for my choreography.”

Never the Less was performed only at the Focus Slovensko Israel festival. YouMake ReMake will be re-run at the elledanse theatre in the future. Elledanse will also make their own guest performance in Israel in December.