WHILE the Slovak National Theatre (SND) has hosted numerous foreign productions, arguably none of them were quite as exotic and spectacular as on October 1, when the Korean Embassy to Slovakia celebrated a national holiday with a traditional dance performance by the Son Kyung-Soon Yeajon Dance Company. 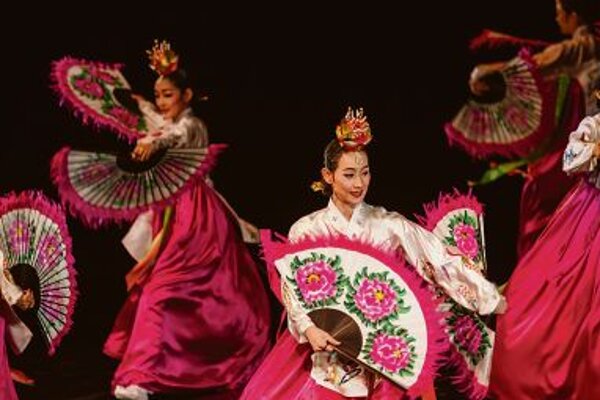 WHILE the Slovak National Theatre (SND) has hosted numerous foreign productions, arguably none of them were quite as exotic and spectacular as on October 1, when the Korean Embassy to Slovakia celebrated a national holiday with a traditional dance performance by the Son Kyung-Soon Yeajon Dance Company.

The Drama Hall of the SND was full, and the Korean Ambassador Sang-Hoon Park mentioned the 20th anniversary of the Korean-Slovak diplomatic ties as another occasion calling for a special event, in addition to the Korean National Day. Ambassador Park stressed that in spite of the geographical distance between the two countries, the nations have become much closer in the 20 years since official ties were established.

The performance itself was two hours in total, including a reception during the break and the initial addresses. But thanks to the variation in the dances, it never felt boring. The dances stemmed from different regions and periods (with the oldest dating back to the 7th century) as well as different styles, utilising a variety of expressive forms and costumes.

The mellow Park-Jeob-Mu, performed in colourful traditional dresses, was followed by the dynamic sword dance, Jin-Ju-Gum-Mu, after which came a more meditative piece involving fans, called Haneulssi. A spiritual solo, Sal-Pu-Ri-Chum came next, after which the impressive Bu-Chae-Chum was performed, representing the hibiscus blossom (or, alternately, the motions of a snake), followed by the “jazzed”, stylised, new dance Shion-Sal-Pu-Ri, as well as two other dances involving drums: Jin-Do Buk-Chum and Chum-Shin-Myung.

The last one, in particular, was well chosen as the culminating highlight of the whole show. Its dancers seemed to communicate not just with the audience but also flirted playfully with the musicians. The whole spectacle was accompanied by live traditional music, including a solo for the Haegeum fiddle, a two-stringed instrument.

Chosen very carefully as to introduce the Korean tradition and offer insight into its rich world of symbols, myths and archetypes, the production nevertheless kept even the western audience attentive and curious to learn more.

The “Chum” performance of the Son Kyung-Soon Yeajon Dance Company seemed to bring a flair of exotic tradition and culture, but without getting too demanding or sophisticated, representing a very skillfully executed, pleasant sample of a culture with old and complex roots.