YOUTH unemployment, nuclear power, and co-European capitals of culture were among the big topics that top Slovaks and French touched on as French President Francois Hollande paid the first ever visit by a French head of state to Slovakia. 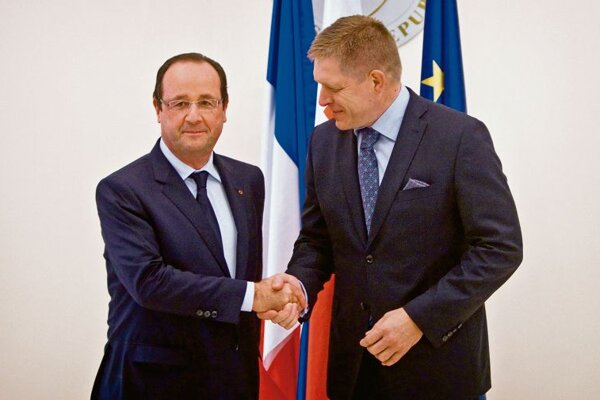 YOUTH unemployment, nuclear power, and co-European capitals of culture were among the big topics that top Slovaks and French touched on as French President Francois Hollande paid the first ever visit by a French head of state to Slovakia.

Hollande made a one-day visit to Slovakia on October 29 to mark 20 years of Slovakia’s diplomatic relations with France. At the beginning of his stay, Hollande decorated his Slovak counterpart Ivan Gašparovič with the Grand Cross of the French Legion of Honour. To repay the honour, Gašparovič awarded Hollande with the highest state award in Slovakia – the Order of the Double White Cross First Class.

As part of the official visit, the foreign ministers of both countries, Laurent Fabius and Miroslav Lajčák, signed the Action Plan of Strategic Partnership for the years 2013-2018, in which they declared their plans to bilaterally develop the partnership and cooperation between the two countries.

Speaking after their meeting at the Presidential Palace in Bratislava, Gašparovič said that Hollande’s visit is of unprecedented historical and symbolic importance for Slovakia, marking 20 years of the existence of an independent Slovakia, but also the 95th anniversary of the founding of the first Czechoslovak Republic, in which France played a significant role, the TASR newswire reported. The Slovak president went on to observe that France is a strategic business partner for Slovakia.

Hollande in his speech highlighted the 20 years of Slovakia’s independence, praising the country’s “stable institutions, economic stability and dynamism”. The French president also observed that Slovakia and France have traditionally enjoyed close relations. Hollande pointed to the partnership between Košice and Marseilles, which were chosen as the European capitals of culture this year.

Hollande then moved on to the Government Office to meet Prime Minister Robert Fico, with whom he found mutual agreement on practically all issues they discussed. They agreed that there is scope for increased cooperation between France and Slovakia in the field of nuclear energy and in addressing youth unemployment.

Hollande and Fico agreed that their countries need to engage not only in austerity measures and budget discipline, but also in boosting economic growth.

“We need dynamics that will turn Europe into a real avant-garde whole, a pioneer of a better management,” Hollande said after meeting Fico, as quoted by the Sme daily.

Afterwards, Hollande also attended a round-table discussion dedicated to topics of the Franco-Slovak strategic partnership. Later in the day, he met Speaker of Parliament Pavol Paška at Bratislava Castle where he also visited the Art and Nature in the Middle Ages exhibition from the Paris-based Museum Cluny which opens there.

The French president’s visit was accompanied by a protest gathering of about a hundred people in front of the Presidential Palace in Bratislava. Its organisers, among the same who organised the National March for Life pro-life in September in Košice, aimed to draw attention “to the need of protection and support of families in Slovakia, in France, as well as in the whole EU”, the SITA newswire reported.

The protest is a response to the legalisation of same-sex marriages in France in May this year.