WITH a roughly 50-percent share of food produced in Slovakia found in stores across the country, several initiatives have been adopted to support Slovak-made food products. The latest of these was signed by the Association of Trade and Tourism (ZOCR) and the Food Chamber of Slovakia (PKS) in December. 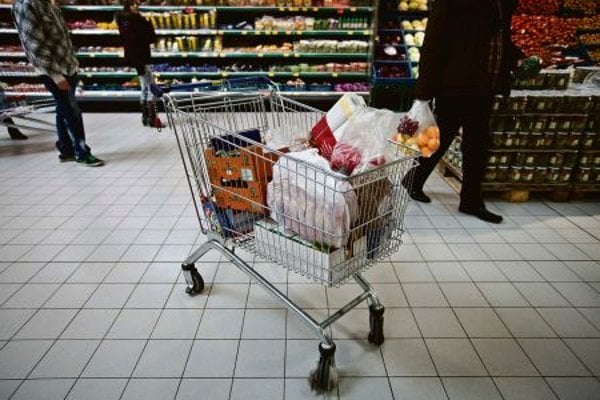 Only about one half of the food in people’s carts is likely made in Slovakia. (Source: SITA)
Font size:A-|A+0

WITH a roughly 50-percent share of food produced in Slovakia found in stores across the country, several initiatives have been adopted to support Slovak-made food products. The latest of these was signed by the Association of Trade and Tourism (ZOCR) and the Food Chamber of Slovakia (PKS) in December.

The relative lack of Slovak food products on the shelves means that most profits from food sold in the country go to foreign producers, and the country’s labour force in the agricultural and food-production sector remains underutilised. The new initiative aims to increase the amount of Slovak-made food in retail trade.

“The Food Chamber of Slovakia has been pointing to the negative development in the agro-food sector for a long time,” PKS director Jarmila Halgašová told The Slovak Spectator. “The fact that exports of raw agricultural materials increase every year and on the other hand imports of processed products increase indicates that we voluntarily provide employment to citizens of other EU member countries. In Slovakia the creation of added value has been decreasing and this is not a good trend. This results in the closure of food companies along with the ceasing of jobs in the food industry.”
Various surveys reveal a low proportion of Slovak products on store shelves and in the baskets of Slovak shoppers, putting them at about 50 percent. This is pushing food producers to address merchants to launch a bigger discussion over how to improve the position of Slovak food producers and thus also the domestic economy. The new initiative is the latest result of these activities.

“Signing the initiative is, however, only the beginning of our long-term efforts,” ZOCR Vice President Štefan Mácsadi told The Slovak Spectator. “With this initiative we send the public a signal, which we address to citizens, business people, politicians and all those who see the sense and contribution of this initiative.”

According to Mácsadi, the ZOCR’s signing of the initiative is an indicator of how it views the current availability and sale of food produced in Slovakia.

“As a consequence of the persisting crisis, the continual decline of the agro-food sector has been deepening,” said Mácsadi. “The ZOCR and the PKS feel the need to increase the share of the sale of Slovak food. To achieve this goal we will develop and implement activities and address other market participants to fulfil the initiative’s goals… The signing of this initiative will lay the basis on which we can build.”

Neither the ZOCR nor the PKS have specified a goal for what percentage of Slovak food they would like to see being sold, explaining that this would depend on many factors. For now, both sides agreed to create working groups to propose measures that would increase the availability of Slovak food in the retail market. The first session is slated for February.

The Slovak Agricultural and Food Chamber (SPPK) also considers the domestic marketability of Slovak food to be very low, calling for the parties involved to do their utmost to increase it.

“Every initiative can be beneficial, but only when it goes beyond the discussion phase into actual implementation,” SPPK spokesperson Stanislav Nemec told The Slovak Spectator. “We have heard from the mouths of representatives of retail chains a lot about their interest in selling more Slovak food products, but in practice they have not changed their behaviour towards domestic suppliers, and thus no further significant changes in the sale of their production have been achieved.”

According to Nemec this has led to a decline in domestic food production. Over the last few years it stabilised at €3.1 billion, but it exceeded €4 billion 10 years ago. The PKS puts the utilisation of food production capacities in Slovakia at 50 percent. Differences between subsidies that individual EU members receive for agriculture and food production are also behind this low usage, while Slovakia still does not receive subsidies at the level of established EU members.

“The fact that roughly the same share of imported foods as domestic ones are being sold here puts Slovakia in the category of states with an insufficiently developed production base,” said Nemec, adding that in western countries the availability of domestically produced food is at least 80 percent or higher, while imports are used only to fill the gaps and enrich the offer. “However, in Slovakia exports pushed domestic production away,” and in many cases it is only barely surviving.
According to the Agriculture Ministry, the production capacities of Slovakia’s agriculture and food production sector are not fully tapped, while it likens solving the problem to a long-distance race requiring both short-term and long-term solutions.

The statistics show significant differences in the proportion of Slovak food among individual food groups and branches of the food industry, the ministry’s press department told The Slovak Spectator. Thus, it considers it necessary to examine current production capacities, consumer demand and commercial cooperation and communication between producers and merchants in the different food industry branches. But it sees its primary role as creating a mutual framework and legislative conditions that will lead to an increase of quality Slovak products on the market.

The SPPK realises that relying on legislation is not enough. Nemec believes that a better and less ambiguous indicator of the country of origin may help, too.

“In the phase of preparation there is a regulation about labelling, promotion and marketing of products and foods marked by voluntary data, which all the domestic producers, eager to distinguish themselves from foreign competition, will be able to use on a voluntary basis,” said Nemec.

ZOCR president Pavol Konštiak said when signing the initiative in December that retailers care about what and in what amounts they sell, but that Slovak products must be attractive to their clients, as cited by the TASR newswire. The PKS is prepared to look for ways to increase the amount of Slovak foods on store shelves.