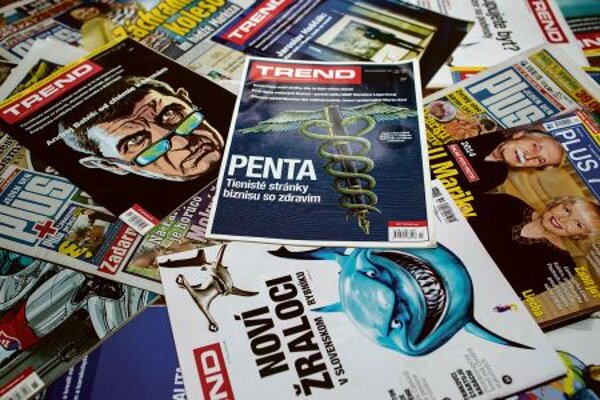 The Trend and Plus 7 Dní weeklies have new owners. (Source: SME)
Font size:A-|A+

The pairing has acquired two significant Slovak publishing houses, 7 Plus and Trend Holding. While Penta sees the investment as an interesting commercial opportunity, it promises not to interfere with the content of newspapers and magazines. Media experts warn of the opposite, however, and perceive the acquisitions as a means for obtaining mouthpieces for other businesses.

“The economic model of operation of mostly print media faces fundamental challenges in the form of a drop in income from advertising,” Penta spokesman Martin Danko wrote in a statement. “It is obvious that in order for traditional media to adapt to this new reality and survive, they need a financially strong and stable investor.”

“Our aim is to contribute to creating an economically successful model of operation of the media in the central-European region,” wrote Danko, adding that Penta wants to invest into media also in the Czech Republic and Poland.

The media investment also creates for companies from Penta’s portfolio an interesting commercial opportunity in the form of usage of advertisement cross selling, in print and online.

“For both sides [the media as well as companies and their projects] of such a partnership there is significant commercial potential,” Danko wrote.

Trend Holding publishes the Trend weekly, the most significant economic weekly in Slovakia, and Profit bi-weekly, in addition to running several websites, like Trend.sk, Medialne.sk, Trendreality.sk, Eprofit.sk, and Trendrestauracie.sk. It also organises events, awarding the best firm of the year, bank of the year, insurer of the year, manager of the year, among others.

Spoločnosť 7 Plus, the second biggest publishing house after Ringier Axel Springer Slovakia, publishes the second most read daily, the Plus Jeden Deň tabloid, the Plus 7 Dní news weekly and several other magazines which focus especially on lifestyle, fashion, health and women. It also administers the Atlas.sk and Centrum.sk websites.

Gabriel Šípoš, the head of Transparency International in Slovakia, does not view the move positively, as it further concentrates media ownership into fewer hands.

“The fewer owners there are, especially if they are businessmen who also own other companies, the more difficult it is for journalists to report in an independent way,” said Šípoš, as cited by the Sme daily.

According to him, the decrease in independence could be balanced by greater financial stability in the media.

“It is better to have 7 Plus and Trend under any owner than bankrupted,” said Šípoš. “They will inform independently at least about something.”

“Nobody will invest money into such media, which should be watchdogs of democracy; they simply want to make money on media,” Brečka told the Pravda daily. “The second thing is that they need mouthpieces for their business interests.”

Branislav Ondrášik, another media expert, pointed out that the global trend is increasing concentration and consolidation of media ownership.

“We can see this in the fact that a substantial portion of world media [outlets] are owned by only some companies,” Ondrášik told the public broadcaster Slovak Television.

According to Ondrášik, it is difficult to forecast how the situation will develop and whether the change in ownership will have an impact on content or these media in general.

“But we have experiences from abroad which show us that it was not always a breeze of some free spirit when such a change took place.”

Over the next few months Penta plans to create and introduce with its partners a media management group consisting of international and local experts. The management group will be responsible for the next acquisitions on the Slovak, Czech and Polish markets and will manage the entire media portfolio.

“We fully realise the responsibility and concerns which our entry on the media market is raising,” Danko said, adding that this might especially arise in its size and engagement in the Slovak, Czech and Polish markets. “Also, this is why we want to consistently separate management and the operation of editors’ offices from our other business activities or interests.”

Penta says it will implement a clear ethics code, which will guarantee editorial independence.
“Any attempts for inappropriate influencing and interference into journalistic creation would never remain concealed on such a small Slovak market and would lead to a significant damaging of the value of our investment,” Danko told Sme.

Penta did not specify the price of the transaction. Danko, who is also one of the managers who will be devoted to media business in Penta, specified for the Hospodárske Noviny daily that V 3 Media Holdings is owned by western European investors – private individuals – and that Penta is co-financing the transaction.

“Our task is to bring financial stability to these publishing houses and help to create management which will be, in cooperation with current management, able to carry out changes which will secure a healthy economic operation,” Danko told Hospodárske Noviny. “We all can see that the media model operates economically today, which means from traditional incomes from advertisement, that this cannot be sustainable any more. In the whole market there will occur changes which will lead to consolidation and also probably to a reduction of the number of publishing houses or titles.”

According to Jozef Dukes, one of the representatives and co-founders of 7 Plus, the time for fusion and large investments into digital versions of print media and internet commerce is coming.

“Classical print media faces a long-term decline in revenues from advertising and a loss of readership, but this does not mean that people will stop reading,” said Dukes, as cited by the TASR newswire.

Štefan Šimák, another representative and co-founder of 7 Plus, sees the fact that the new publisher has agreed with the long-term editor-in-chief of the flagship weekly of 7 Plus, Plus 7 Dní, Miloš Luknár, on further cooperation as a promise of keeping the existing line of the weekly.

At Trend weekly, editor-in-chief Oliver Brunovský, who was also one of owners of the publishing house, will also keep his position, while no staff changes in editors’ offices are planned.