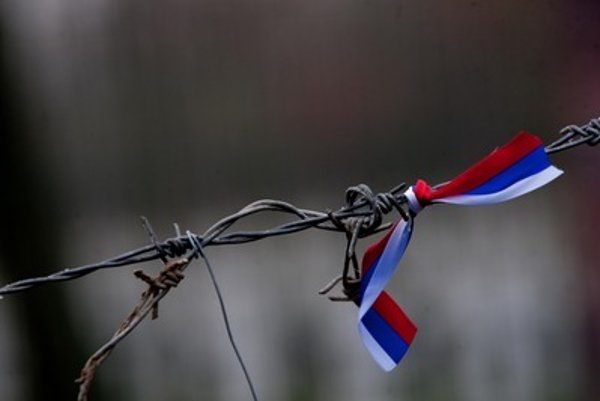 The first manifestation of the Velvet Revolution on November 17 came as part of a day commemorating the closing of Czech colleges and universities by the Nazis in 1939, but crowds of students shouted mostly anti-communist slogans. After the brutal crackdown by riot police against students who were marching in Prague, they withdrew to schools and theatres, where actors had gone on strike. A series of demonstrations, meetings and negotiations eventually led to a general strike that spurred the fall of the communist regime. Students in Bratislava were key to these events.

“We have empty hands but we will never let the right for freedom of speech without violence to be taken from us,” Zuzana Mistríková, one of the best known student leaders of the revolution and students strike, said in her speech during the revolution, as quoted by the Sme daily.

Students had a principal role in the revolution as the regime was unable to convince people that they were just some small group of intellectuals or anti-state individuals, Mistríková told The Slovak Spectator.

“We [students] were a big part of the fact that protests of several intellectuals turned into a national movement in a few days,” another student leader, Juraj Vaculík, told The Slovak Spectator, “because students identified with the protesters very fast, and also in part emotionally because they lured their parents, who were rather passive, to their side.”

In 2009, Mistríková recalled the 1989 events in a piece for the Žurnál weekly.

Many of her teachers at the University of Performing Arts in Bratislava (VŠMU) were opinion leaders in the theatre world, she wrote, and it was artists who acted first in Slovakia after the November 17 crackdown in Prague. Together with Vaculík she saw how actors refused to work for two days after the crackdown as a protest.

“Me and Ďuro [Juraj Vaculík] were in Astorka [theatre] and saw brave people, some of our pedagogues among them, as they stood in front of the audience and with shaking voices said what they thought,” Mistríková wrote. “They said that they wouldn’t act because they considered it to be absurd to play theatre in a country which has values set in such a way that it first beats peaceful student demonstration and then acts as if nothing happened.”

The next day they entered the strike to support students and actors in the Czech part of Czechoslovakia who were already on strike.

“If you asked anyone on that day whether they thought that this was the beginning of the end no one would have said yes,” Mistríková wrote.

Within a few days it became to be clear who was a good speaker who was better in management and so on, said Vaculík in interview for jetotak.sk, adding that he was a manager of sorts of students headquarters in Bratislava, organising students’ activities in the whole country.

“Particularly in the first days we [students] turned to be extraordinarily capable organisers,” Vaculík told The Slovak Spectator. “Even [we were] not totally prepared, but capable of organising many simultaneous actions and logistics.”

At the beginning it was not easy to persuade students to join the strike. Fear and caution were frequent features and people started to join mass protests after a week or two when it became clear that regime was not able to respond by power and started to fall, he told jetotak.sk.

“Some joined immediately, some in a few days and some saw it as a vacation and went skiing,” Vaculík told The Slovak Spectator.

Many had a sympathetic ear for the protesting students but remembered the Warsaw Pact invasion of Czechoslovakia in 1968 and therefore decided to wait and see what would happen, he said, according to jetotak.sk.

Another student leader Filip Vagač was a member of coordination committee which represented 52 faculties of Slovak universities and prepared evening demonstrations. Each lasted for two or three hours, and had two moderators who were usually some well known people, he said.

“Today, probably no one would stay there for such a long time,” Vagač said, as quoted by jetotak.sk, “but the enthusiasm that people felt then was immense.”

After the revolution some student leaders tried to stay in politics like Mistríková or Anton Popovič.

“I tried it in the National Council and realised that this is not my way,” said Popovič, as quoted by Sme back in 1999. “To do some political function I needed law and economic knowledge, and I did not have it.”

Popovič is currently at the helm of the Slovak Performing and Mechanical Rights Society (SOZA). Vagač was director of Children of Slovakia Foundation, administrator of Ján Langoš Foundation and government proxy for the development of civic society until 2013 when he left on his own request.

Vaculík was director of Astorka Korzo '90 theatre and other theatres in Slovakia, he has been working as creative director in a couple of marketing companies, and currently is in the presidium of Slovak Advertising Standards Council, a self-regulating ethics body, where Mistríková is president.

When asked about comparison of current life with the one he had during the communist regime, Popovič told Sme that current life is better, even if there are also new problems.

Mistríková wrote that she often gets questions about disappointments which came with democracy. During the revolution people knew what they did not want but had no idea what they wanted and some were not prepared, she wrote for Žurnál. Some people therefore felt that the new system betrayed them.

“I am sorry for many things [which have happened in Slovakia] and they don’t have easy solutions, but there is no other path than the one which we have chosen,” Mistríková told The Slovak Spectator.

Vaculík also pointed out that currently, people are rather lukewarm to the November 1989 idealism, yet he is still proud of the country despite present corruption, clientelism and negativism.

“I am still proud what we have done in 25 years,” Vaculík said, “and I believe that after overcoming all those growing pains Slovakia will become successful and developed civic democratic country.”