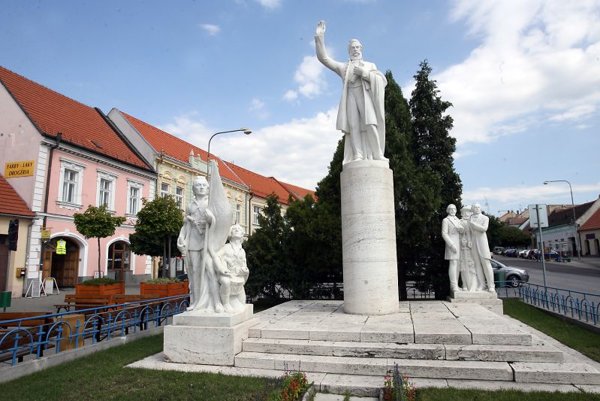 THOUGH he lived in the 19th century, Ľudovít Štúr impacts our everyday life as he and his fellows laid the basis for the contemporary language we use in both speaking and writing. Štúr, as historians agree, was also an outstanding scholar of his lifetime and one of the leading personalities of the Slovak national revival.

Slovakia has devoted all of 2015 to this historical personality to commemorate 200 years since he was born.

“Štúr intervened in Slovak history at the time of one of the greatest transformations in European civilisation,” historian Dušan Škvarna from the University of Matej Bel in Banská Bystrica told The Slovak Spectator when explaining why he became such an important historical figure.

At the time, several processes were underway across Europe, including the transformation of the estate society to civic society, the modernisation of traditional ways of life, and the formation of modern nations. Also, new social relations were formed, the historian explained.

“Štúr played the most important role at this point – he managed to apply the universal values of that period to specific Slovak conditions,” Škvarna said, adding that he became one of the leading social reformers of that time.

Štúr can also be perceived as the main creator of Slovak political thinking and politics itself, as well as the promoter of modern ideas and new social structures, and the inspirer of the emancipation of Slovak culture as a whole. He also organised the Slovak nationalists and helped them to achieve their goals.

Škvarna adds that he was also an idealist. He was loyal to morality, ideas and ideals and considered it natural to suppress his own comfort and benefits. He even rejected a successful career after he refused to join the official and supported Hungarian culture.

“He considered service in favour of humanisation and modernisation of the Slovak society and its free national life the natural point of his life, without waiting for rewards,” Škvarna added.

According to Marcela Bednárová of the Institute of History of the Slovak Academy of Sciences, Štúr always had a strong will and “though it may sound pathetic, he felt as if it was his mission”. She stressed that he considered the ability to sacrifice the most important Slovak feature, which he attributed to Slavs.

The way to modern language

Štúr was born on October 28, 1815 in Uhrovec (Trenčín Region) into the family of a Protestant teacher. He became the leader of the Slovak national revival in the 19th century, and organised Slovak volunteer campaigns during the 1848 revolution. He was also a politician, writer, poet, journalist, publisher, teacher, philosopher, historian, linguist and member of the Hungarian Parliament. He died on January 12, 1856 in Modra (Bratislava Region), after being injured while hunting.

One of the important legacies of Štúr and his fellows is the standard Slovak language. In the early 19th century there were two main groups using two different languages. While the Catholics used the language Anton Bernolák codified in late 18th century (based on the dialect used around the town of Trnava), the Protestants were using the archaic language of the Moravian Bible of Kralice.

Štúr, together with writer Ján Kollár, first supported the idea of creating a kind of “Czechoslovak” language by gradual penetration of Slovak expressions into Czech. He soon however realised that this would not be possible, as the Czechs did not want to give up their expressions and Slovak Catholics did not accept the Czech language or expressions. Moreover, the Protestants did not accept Bernolák’s language, Bednárová said.

“The fact that Štúr decided between 1842 and 1843 to create ‘new Slovak’ meant that he wanted to build the language upon national identity,” she added.

The base for the new language became the central Slovak dialect, for which there were several reasons, Škvarna said. First, among the three main dialects used in Slovakia at the time it was the most widespread. Not only was the central Slovak region bigger than the remaining two, but also the people who were living outside Slovak territory were using it, the historian explained. Second, the central Slovak dialect was more distinct from the Czech and Polish languages than the other two, which was important for a smoother process of forming the nation and the national identity of Slovaks, Škvarna explained.

The third were the historical and ideological reasons. One of the theories of the genesis of Slavs suggested that they were formed in “the Tatras” (in the Carpathian Basin) and then moved to their current settlements. This meant that the central Slovak dialect is closest to the archaic Slav language, Škvarna explained, adding that it also indicated that this language had long been part of the Carpathian territory and that the language of old Hungary is not only Hungarian, but also Slovak.

Many scholars, Slovaks, Czechs and also other Slavs however, disapproved of the codification as they considered it “foiling the plans of Slavs’ unity”, Bednárová said.

The representatives of the Catholics and Protestants finally agreed on using the new standard language in 1847, the Stur.sk website wrote.

How we see him today

When it comes to the current image of Štúr in Slovak society, there are different groups: a small minority is glamorising him, the greater majority does not perceive him and a small minority is cursing him, Škvarna said. Unlike other historical personalities, he is still present in current memory, he added. The quality of his image, as well as the information and ideas about his activities are however blurry, the historian said.

“I think that Štúr’s contribution is often reduced mostly to the linguistic area,” Bednárová said, “though he was also a person with interesting ethnological and philosophical opinions.”

She added that unfortunately the fate of many personalities described in textbooks is that their importance is “oversimplified”.

The year-long celebrations of Štúr

SEVERAL events will take place on both the national and regional levels to commemorate the 200th anniversary of Ľudovít Štúr’s birth, with special focus on Bratislava, Uhrovec, Modra, Zvolen and Hlboké. The government has allocated €715,840 for this purpose.

The events will target both professionals and the general public, focusing on the young generation to which they want to present Štúr and his fellows, as well as the era in which they lived, “in an understandable way”, reads the document authored by the Culture Ministry and adopted by the government on October 15, 2014.

The Museum of Ľudovít Štúr in Modra, which is part of the SNM, will be under reconstruction and will open only in November, also bringing the new exhibition. However, it will try to exhibit part of its current collections elsewhere, its director Viera Jančová told The Slovak Spectator. They also plan to offer visitors a publication about the memorials of Štúr in Modra (which will be launched in January) and, if there are requests, guided tours.

Part of the celebrations will be the opening of a new exposition in the reconstructed Evangelical parsonage in Hlboké where Štúr and his fellows agreed on codifying the Slovak language in 1843, and also various literary competitions, conferences as well as the world premier of a composition called Pilgrims, played by the Slovak Sinfonietta from Žilina.

The celebrations will culminate in Uhrovec, Štúr’s birthplace. The closing ceremony will take place in December in Bratislava.

The Slovak National Library (SNK) also joined the celebrations, starting the year-long activities in October 2014. The library plans to publish interesting facts from his life every month, the SITA newswire wrote.

The anniversary was also listed in the calendar of UNESCO for 2014 and 2015. In this respect, it will offer the exhibition spaces at its Paris headquarters free of charge. There will also be some exhibitions at Slovak embassies in countries connected to Štúr’s life, TASR wrote.