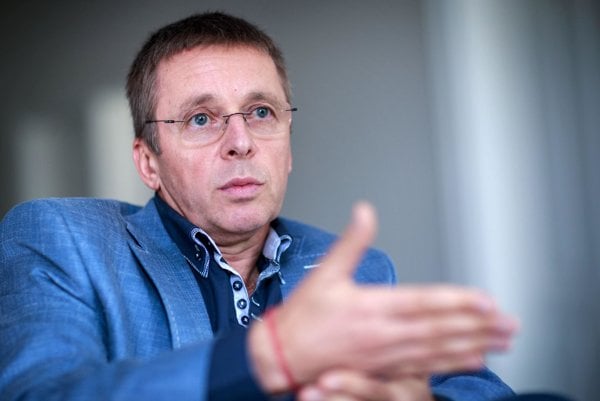 FORMER Slovak finance minister Ivan Mikloš has agreed to advise the Ukrainian government in efforts to deregulate their economy and consolidate public finances, according to the news site Aktualne.sk.

In a February 3 interview, Mikloš told the website that he will join the National Reform Board, though it remains unclear what his exact role will be and how long it will last. “The work is not yet paid, we will see how it will continue,” he said.

Mikloš served two terms as finance minister, between 2002-2006 and 2010-2012. He also worked at cabinet level positions in charge of privatisation and as deputy prime minister.

While working as finance minister under Prime Minister Mikuláš Dzurinda, Mikloš implemented at 19 percent flat tax on personal income, corporations and VAT. Reforms lowered budget deficits and spurred growth of more that 6 percent annually and helped open the door to Slovakia joining the eurozone in 2009. They also saw unemployment spike to more than 20 percent at one point, before settling in at what remains a consistently high unemployment rate of about 13 percent, which largely remains today.

Polish economist Leszek Balcerowicz, noted for implementing that country’s so-called shock therapy economic transformation in the 1990s, is also said to be among the foreign advisers for Ukrainian President Petro Poroshenko as he seeks to restructure the economy.

While there are similarities with Slovakia, Mikloš admits that the situation in Ukraine presents additional challenges. “The situation is much more complicated because we were not at war,” he told Aktualne.sk. Also, “there are much more influential oligarchs who impede the necessary reforms”.

Fighting in the eastern regions of Ukraine has worsened in 2015, essentially bringing to an end a September 2014 ceasefire agreement between the Ukrainian government and Russian-backed separatists, who have since overrun the Donetsk airport and are now staging an offensive targeting a strategic railway junction at Debaltseve. The United Nations estimates that 224 civilians were killed in the violence during the final three weeks of January alone.

“Bus stops and public transport, marketplaces, schools and kindergartens, hospitals and residential areas have become battlegrounds in the Donetsk and Luhansk regions of Ukraine – in clear breach of international humanitarian law which governs the conduct of armed conflicts,” the UN High Commissioner for Human Rights Zeid Ra’ad Al Hussein said in a statement.

As the war rages on, the United States looks increasingly likely to provide the Ukrainian government with arms to fight the separatists, something that European leaders have thus far balked at. German Chancellor Angela Merkel and French President Francois Hollande were slated to visit Kiev and Moscow on consecutive days February 5 and 6, and US Secretary of State John Kerry was in the Ukrainian capital for talks February 5 as well.

Even beyond the violence the economic situation in Ukraine is markedly worse than it ever was in Slovakia. Ukrainian economic output dropped 6.5 percent in 2014, according to the International Monetary Fund. That decline comes as the war costs the equivalent of USD 7 million per day to fight. Whereas defence spending accounted for just 1 percent of the national budget in 2013, it now accounts for more than 5 percent of total spending. The country’s currency plunged 48 percent against the dollar last year, the biggest decline in the world.

Russia was previously Ukraine’s biggest trading partner and the war torn eastern part of the country was the centre of the country’s coal industry, which has largely ground to a halt. On February 5, the Ukrainian Economy Ministry estimated the economy will contract by a further 4.3 percent in 2015. Finance Minister Natalie Jaresko says the country needs an additional $15 billion in financing from the IMF or other sources.

“Reforms mean changes and people don’t like changes. People fear changes and this is the reality everywhere and it is also natural and normal,” Mikloš wrote in an op-ed for the VoxUkraine think tank last year. “Anytime I am asked what the most important precondition for Slovak reforms was and what is also the most important precondition in general in any country, my answer is the same – political leadership.”

On February 2, Ukraine launched a new electronic system for corporate tax filing in an attempt to eliminate some $1 billion a year in tax fraud, but Mikloš has been critical of the pace of change. He has criticised lack of ambition and the poor political presentation of the country’s 2015 budget and earlier this year condemned a “lack of coordination and cooperation between the government and the Parliament, which is connected with a lack of political leadership”.