Lacrosse, sport of the Indians

Lacrosse is a hard but fair sport, teaching players teamwork and responsibility. 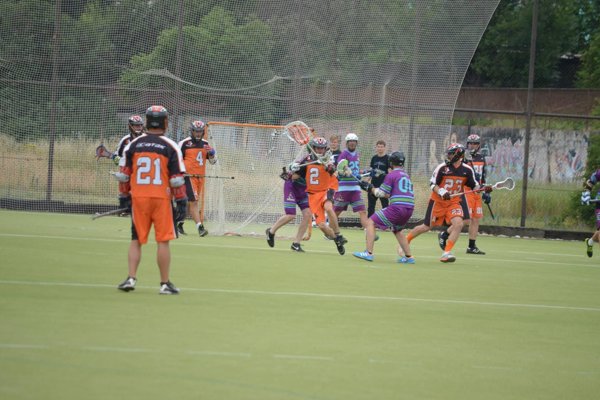 LACROSSE combines the technical skills of handling a small ball ‘long-hand’ and physical fitness. Although it does not have a long history in Slovakia, it is gaining popularity amongst young people who find American football too brutal.

Lacrosse was a collective game of the American Indians, played on a field or artificial surface as early as in the 15th century. Each player has a long stick with a small mesh net at the end. The aim of the game is to get a small rubber ball into the opponent’s goal.

Although it might be a familiar high school sport from some American movies, most Slovaks do not know much about this sport. However, it is an officially recognised and organised sport since 2003, when the first team – Tricksters LT Bratislava – was formed.

In 2002, lacrosse enthusiasts in Slovakia started to organise themselves. The main pioneer was Mark Lichter who, along with his brother Tomas started the club Tricksters. Early experiences came at the football stadium Spoje Bratislava and they participated in friendly matches. Between 2002 and 2005, they participated in the Czech lacrosse league and in 2007 they qualified for the Austrian Open tournament.

Currently, there are six lacrosse teams in Slovakia with 120 registered players.

“As it is an amateur sport, for all of them it is just a hobby,” Martin Kramár, president of the Tricksters lacrosse team, told The Slovak Spectator.

A lacrosse team in Trnava was also started by a young enthusiast, Radovan Urban, who was seeking an alternative to American football. It was registered in August 2014 and the current squad consists of 12 men and three women, all of them are Slovaks.

“It is difficult to find new people for this sport,” said Urban, adding that 90 percent of the players came to the team through peer contact.

The Slovak lacrosse league still lacks formal structure and takes part only in the form of tournaments. Each team organises a tournament in their city and all the teams take part. Each round includes three matches, according to the toss.

“Recently, we are observing increasing interest in this sport from potential players as well as fans,” said Kramár, adding that it offers attractive game-play full of interesting actions and game situations.

Apart from the competitive sphere, lacrosse can be a good physical activity for the general population.

“Mainly the young people seek some kind of physical activity, something that is ‘in’,” confirmed Kramár.

“Lacrosse is a hard but fair sport,” added Urban. “It teaches you teamwork and responsibility.”

Anyone can play it, but people with sporting experience acquire the skills faster.

Physical contact is allowed but limited only to the situations when the opponent is in the vicinity of the net, or five metres. These rules make lacrosse a tough but fair sport where the skill of handling the small ball using a stick combines with physical fitness and endurance because the match lasts for four rounds of 25 minutes.

Like many other amateur sports, lacrosse does not enjoy much support from legislators.

“There is no support, nor conditions on the part of the state,” confirmed Kramár. “Everything is financed from private sources and managed by participants themselves.”

Obtaining finances is especially difficult in cities with strong a history of traditional sports, for example Trnava. Urban also confirmed that football - soccer is given the most attention.

“The only subsidy we have is a one-time grant from the city of Trnava,” said Urban. “It was just a three digit sum and almost all expenses are covered from membership fees.”

“We are a young team and therefore we want to move on and improve the skills of the players,” said Urban, adding that in the future they would also like to start youth teams, but the main priority is participation in the Slovak league.

The main goal for the future of Tricksters according to Kramár is to attract the largest number of potential players and promote the sport.

“To obtain financial means and represent the sport accordingly,” he specified. Together with the representatives of Trnava, they would like to form a Slovak national team and create good conditions for future talent.