A COUNTRY of people with an open heart, capable of receiving and lending a helping hand. That is the image that President Andrej Kiska believes Slovakia should emerge from the migration crisis with. The government and its partners in the region, however, oppose a quota system. 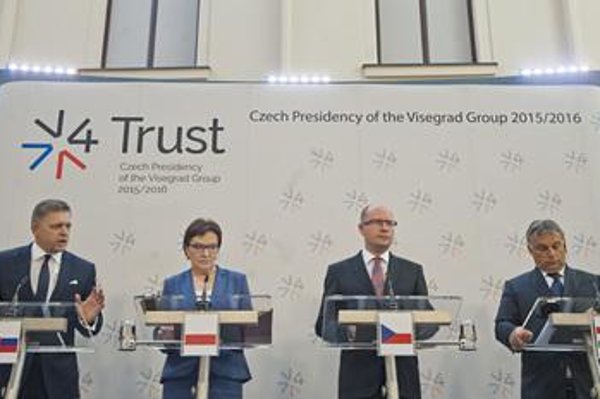 “The discussion we are having about migrants and refugees represents, in my opinion, a crucial battle for the heart and soul of Slovakia,” Kiska said

But despite the recent wave of solidarity among citizens who have been raising funds and material aid and carrying it across borders for refugees in Hungary and Austria, Slovakia barred itself from migrants for the moment, with the exception of a couple of hundred Syrian Christians that the government pledged to take in.

Along with its partners from the Visegrad Group, Slovakia deems the system of compulsory quotas for redistribution of migrants in Europe unacceptable. So much stems fromthe joint statement of the Visegrad Group (V4) prime ministers who met on September 4 in Prague to discuss the migration crisis.

Quotas remain in the centre of the public debate on the migration crisis.In his major statement on September 7 President Kiska noted that migration and refugees have not become a pressing part of Slovakia’s national agenda until the European Commission first presented its quotas proposal.

Kiska, however, does not see the quotas system as the crucial question.

“The question is how to find reasonable solutions, including shared solidarity with refugees and partners across Europe,” Kiska stated.

Kiska's statements differ from the conclusions of the summit of the prime ministers of the V4 (which apart from Slovakia comprises also the Czech Republic, Poland, and Hungary) in Prague, where they refused the quotas that the EU requires for re allocation of refugees among member states.

The prime ministers insist on “the voluntary nature of EU solidarity measures”, so that each country might build on its experience, best practices, and available resources, the joint statement reads, and goes on that “any proposal leading to introduction of mandatory and permanent quota for solidarity measures would be unacceptable”.

The statement comes just before the European Commission is expected to present its new proposal of quota system on September 9. It should include a fixed key for the resettlement of 120,000 refugees in the EU, according to the media reports, with states that refuse sheltering migrants having to contribute funds to the common European coffers.

The strongest opposition to the proposal is expected to come from the V4 countries. The disagreement between the western EU countries and the V4 proved strong also during the September 7 meeting of PM Robert Fico and his Czech and Austrian counterparts, Bohuslav Sobotka and Werner Faymann respectively, in Bratislava.

Fico labelled the quotas “irrational” following the meeting, and added that immigrants don't want to remain in Slovakia anyway, and the country doesn't have any instruments to keep them here, the TASR newswire reported.

Foreign Minister Miroslav Lajčák is not that strong in his statements regarding the quotas. During the September 5 informal talks of EU foreign ministers in Brussels he said that he was not against quotas, the Sme daily reported.

The V4 prime ministers agreed that better protection of external borders of the Schengen Area is of top importance, including more efficient defence against smuggler and a better policy for returning refugees to their country of origin. They also support the international coalition in the fight against Islamic State. 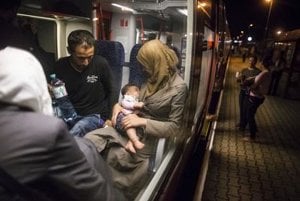 They also criticised western Europe (represented mostly by Germany and France) for “moralising and preaching”, as Slovak Prime Minister Robert Fico said as quoted by the Sme daily.

Fico said that Slovakia is not able to integrate people of a different culture and he continued to say that the current refugee crisis should be solved where it originated, in Syria and Libya, even if it means using military action if the United Nations gives the mandate, Sme quoted him as having said.

Slovakia is ready to contribute in financial, material, and personnel terms if Greece, Italy, and Hungary need help to protect the outer Schengen borders, “maybe even in military terms”, Fico said following the meeting with Sobotka and Faymann in Bratislava as quoted by TASR.

Kiska’s statement, sharply in contrast with previous statements by PM Fico, unveiled the fact that the migration crisis is, particularly after the crisis in Ukraine, another issue that the two highest constitutional officials have split opinions about.

In Slovakia the debate about migration has been dominated by questions such as whether Slovakia can afford accepting a few hundred or thousand people in danger, or why Slovaks should help when they still have problems of their own, Kiska noted.

“There will always be problems and challenges that we will have to face,” Kiska said. “But it must not be a reason for us to isolate our country and become reluctant to help others.”

Kiska also stressed the distinction between refugees and illegal economic migrants “who should speedily be returned to their safe home countries”.

Kiska also dismissed concerns that refugees might pose a security threat to Slovakia.

“To the best of my knowledge, there is no official government-drafted document, analysis or report to substantiate these concerns,” Kiska said. “Slovakia has already faced even more than ten thousand asylum seekers and we have successfully dealt with the situation.”

Fico, on the same day, stressed the security dimension of the migration problems as he noted that the mass of people coming to Europe demonstrably also includes figures from Islamic State, TASR reported.

Kiska also reacted to the statements of Prime Minister Robert Fico who over the weekend said on the public-service Slovak Radio that 90 percent of the refugees are young men seeking jobs.

“Is a person who shells out €5,000 to a smuggler really impoverished?” said Fico. The Slovak PM is convinced that if the influx of refugees is to be stopped, the UN and EU must contribute to stabilising their home countries.

Kiska, on the other hand, noted that everyone would be willing to sacrifice all their property if they or their families faced the risk of death.

“We will lose the battle for the heart and soul of our country if we, both as citizens and as politicians, will not be able to make a distinction between fearing the unknown and unconcealed hatred, contempt for human life, extremism, xenophobia and fascism,” Kiska said. “And also if we fail to clearly and categorically refuse such expressions of intolerance.”

Fico dismissed Kiska’s criticism by saying that those who bear no responsibility are able to make any sort of statement, TASR reported. Fico and his government continue advocating the joint statement of the V4 summit.