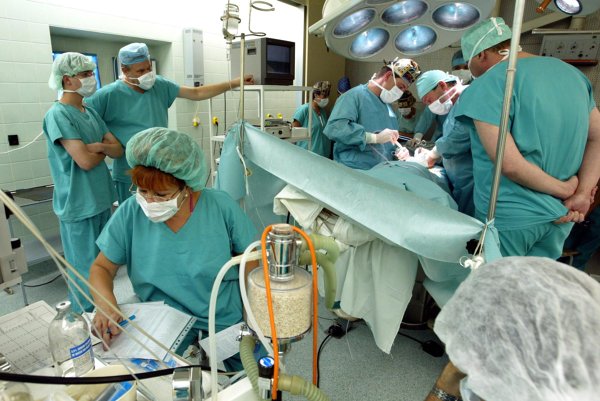 ORGAN donations in Slovakia are falling behind neighbouring countries and doctors are seeking new donors as well as campaigning for financial support from the government.

“In the last 10 years we recorded a decrease or stagnation in the number of donors,” said Daniel Kuba, the director of the National Transplant Organisation as cited by the SITA newswire. “In 2014, Slovak doctors conducted 125 kidney transplants, 17 heart transplants and 23 liver transplants. It is a 42-percent decline compared with 2007.”

The most frequently transplanted organs in Slovakia are kidneys, hearts and livers, according to the Health Ministry. In 2014 Slovak doctors performed 165 transplants. That is about three operations per 1 million inhabitants, which is significantly behind countries such as the Czech Republic (10) and Croatia (14).

Campaign with the public

According to the Health Ministry, Slovakia has 13.1 donors per 1 million inhabitants. Spain has the highest number of organ donors per inhabitant (35.3) followed by Croatia (33.6) and Belgium (33.1).

The ministry wants to change this rate with a new national transplant programme that will also seek to motivate citizens and doctors.

“Increasing the number of transplants would lower overall expenses for treatment of organ failures,” the ministry said.

“An ideal donor can save and improve the quality of life of seven people,” Zuzana Žilinská, the president of the Slovak Transplant Association, told the news site Akutality.sk.

The main aim of the campaign is to draw attention to the issues of organ donation and transplants, as a means of finding solutions.

“We are trying to educate because we feel that the public is poorly informed on this issue,” said Žilinská.

The campaign focuses on the general public to show that Slovak doctors are able to provide quality service involving organ donations and transplants.

“However, without organs it is impossible to execute transplants,” said urologist Ján Breza in a Health Ministry press release.

Though the total numbers may lag behind other countries, “from a long-term point of view, the number of organ removals and transplants is slightly growing,” ministry spokesman Peter Bubla said.

At present, there are 345 people on the waiting list for kidneys, 36 for a heart and 54 for a liver, according to the Health Ministry.

“The situation is not peculiar only to Slovakia,” Bubla told The Slovak Spectator. “Other countries also register more potential recipients than donors.”

According to Žilinská, a kidney transplant is the best way to treat terminal kidney failure. It solves several problems – the patient does not have to undergo regular dialysis, their overall health and quality of life improves and they save money. In the same way, chronic heart failure cannot be controlled by medication or surgeries and therefore the only solution is a transplant, the Seven Lives website states.

“Kidney, liver, cornea and heart transplants are ordinarily conducted in Slovakia,” Herda told The Slovak Spectator, adding that more complicated transplants, for example of the lungs, must be done in Vienna.

“I think that the decrease in the number of transplants is caused mainly by the low interest of the state in transplants and that results in low motivation of the whole process – starting from communication with the public and motivation of the doctors,” said Herda, noting the degree of state involvement in Croatia.

Transplant coordinators are doctors who, apart from their ordinary duties, seek out potential donors and try to nudge them to help another patient in need.

Currently, transplant coordinators do not receive any financial compensation for doing this even though the role is always connected with death of a person, making it a sensitive topic.

A transplant coordinator first approaches the family of the potential donor.

“If we are met with a negative standpoint on their part, we try to respect it,” Martin Chrastina, a regional transplant coordinator in Bratislava, told Aktuality.sk, adding that success depends on the character and social skills of the coordinator, who then should be appropriately compensated. Currently, the transplant coordinators receive no compensation.

Slovakia has an opt-out-in policy that considers every person a potential donor. Other countries use an opt-in-out practice that excludes the person from donating unless they have made an explicit written statement that they wish to donate.

“In practice, however, we inform the mourning family about the intention to remove organs from the body of a brain dead patient,” explained Žilinská.

Many relatives do not agree with organ donations. Even when they agree, there are other factors that can prevent transplants since cancer or other serious illnesses could be transferred to the organ recipient.

Some doctors believe that the negative perception has been exacerbated by the media, for example by stories of organ trading. There have also been allegations about unsanctioned organ removals.

“Regardless of the circumstances, we respect the preferences of the family despite the fact that legislation allows removal of the organs,” Bubla said.

“The legislation in Slovakia is pro-transplant oriented,” stated Bubla, adding that its change into opt-in-out would bring about a reduction in the number of transplants.

The Health Ministry has prepared the National Transplant Programme that is awaiting for approval.

“We also transpose EU regulations on increasing the safety of organs, tissues and cells suitable for transplantation,” Bubla said.

The Slovenský pacient group is trying to promote transplants by writing articles and supporting activities of other organizations to increase public awareness about the issue because as Herda noted, “there are no transplants without donors”.