Blog: The trials of Slemence village

It is a jump in time when one goes from one side of the village to the other. 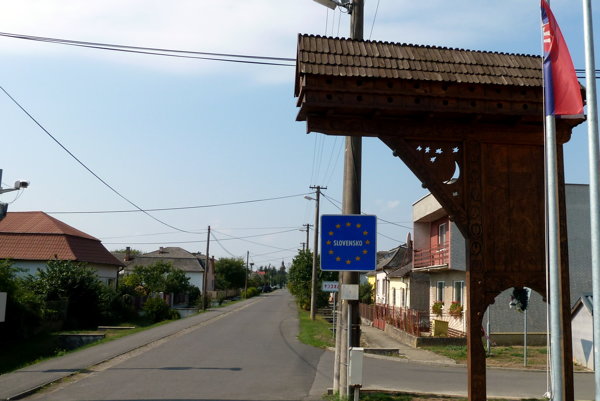 Slemence, surrounded by wide open spaces and farm land, is a eerily quiet place. It is a  jump in time when one goes from one side of the village to the other. There is more going on in Veľké Slemence as I noticed a school, two churches, a ABC shop and a football field. Beyond this I sensed a general lack of movement from either side as I saw so few people, cars, dogs etc. It made me wander, with Mali Slemence in particular, if this place has been mostly abandoned due to high unemployment.

The privileged  Veľké Slemencians, provided they have accounted for the CET and Kyiv time-zone, can walk the village lane and return home within moments. Those from Mali Slemence cannot easily cross over. However, Mali Slemence is more interesting. Close by the immediate border area are the shops. I did not go inside any, as it was enough for me to capture the atmosphere from outside, with what was available on that particular day, with displays of clothes, perfume, drink, cigarettes, household items, toys etc; All at a bargain price, providing you don't ask questions....

Further along I visited a pleasant enough pizzeria. A little beyond is a fine, elegant church and an enchanting folk-lore bus stop, very much from a bygone era. As I looked at what was left of the art work, it really made me wander what other stories this village has to tell. More should be done to highlight and document this place.

It was wonderful to see storks flying by, perhaps over the border; as well as resting close by, as the general stillness of Slemence remained all around until it was time to go.

Last thing I did was to buy some wonderful Ukrainian kvas drink that saw me through my return journey. Then within the heat and dust of the day, I was gone.

I had no troubles whilst in Slemence, but discretion is required, especially with a camera. 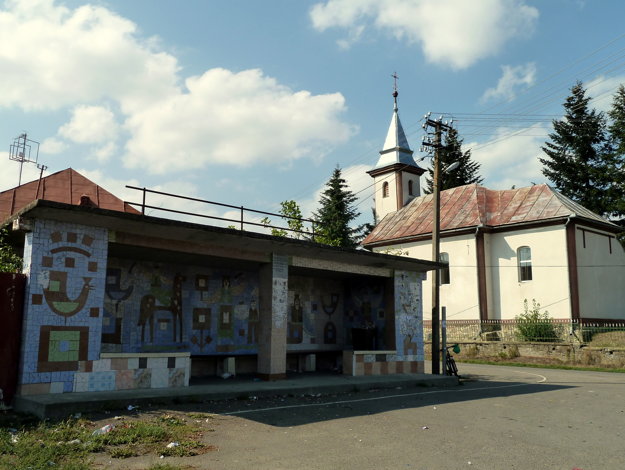 Slemence was once a very ordinary village, that was swept by a political tide that never went away. Slemence formerly known as Szelmenc, was once part of Hungary before enclosed with Czechoslovakia. But more significantly, during the night of August 30 th 1946, the Red Army cut through this village to establish an USSR borderline from the rest of Europe and placed a 6 meter high electric fence alongside with border guards and watchtowers; thus destroying settlements, separating land, property, families, friends for ever. Slemence village was torn in two.

This village, with a Hungarian majority has a mix of Slovaks, Ukrainians, Roma, is better known as the  divided village, comparable to Cold War Berlin in miniature, that still operates this way today; thus not fitting in with today's liberal border scene. The larger Veľké Slemence is situated in EU Slovakia and generally better off with improvements made with roads and infrastructure. Whilst the smaller Mali Slemence, in Ukraine; little has changed in any ones' lifetime. Those from Soviet Slemence were far worse off and were deported if they complained about the system, thus never returning home again.

Throughout this troubled time, it was to the advantage of the Hungarians to converse with the neighbours  over the fence, as the authorities were unable to understand them.

After the death of Stalin, restrictions lightened a little and it became possible to visit  one-another, via Uzhgorod, as visas were still required to go from one side of the village to another. Very strict regulations remained until the collapse of the Soviet Union. Then a new border was installed in 2005 with new procedures, allowing those with documents, to walk the village lane after 60 years of a permanent closure; thus representing a new era. But this was still not enough as Slemence was once again, later embroiled with new Schengen regulations in 2008 that left further behind Little Slemence and its people.

Despite the imperfections of officialdom, the border today is generally  more open, and not so much about keeping local people away. Rather it restricts those from elsewhere, as Big Slemence now plays its part as Europe's gate-keeper along side all other Schengen borders Europe-wide. However this village, still very much out of the way with today's flow of mass immigration coming in from Syria and beyond, remains a minor matter for Brussels now.

The only way to  free the village after 70 years of grief would be when Ukraine joins the European Union. As of now, there is no set date. For those with EU passports, one can freely pass this pedestrianised zone. For those without such privileges, visas are still required as security there is still very much imposed.

However, there is a virtue, bicycles are allowed to pass. As compared to the heavy going 24/7 Uzhgorod and Chop borders near by, as I was sent back with my bike last time I was there.

Apart from curiosity value, Slemence itself is not about tourism, but the Transcarpathia region is. There is much on offer in Uzhgorod, Mukachevo and with the immediate hills and valleys that lead the way towards Lviv and  Mount Hoverla, Ukraine's highest mountain (that was once the most eastern tip of former Czechoslovakia), that stands at 2061 meters high. All are very much worth a visit.

If you wish to visit Slemence, may I suggest hiring a bike from Uzhgorod? Then it is an hour's bike ride along a pleasant back road. To get there from Slovakia requires more extensive driving and map reading from either Michalovce or from Trebišov. Finally, find out about border operating hours before going there.

As for communication, do not expect to speak English. I communicated with my foreigner's Hungarian that saw me through with some local people.

May I recommend watching a very good Slovak film with English subtitles called “Hranica”? This documentary highlights what Slemence and the people went through with this unwanted frontier   line. You can find out more at www.hranica.sk or www.leonproductions.sk

Finally: As I was mostly in Ukraine during this time, may I end this write-up with my favourite Ukraine motto.... “It is OK to be poor: But it is not OK to look poor.”

This says much as I always reflect on how I dress when I am there!