Slovakia among the elite

NEGATIVE interest rates as a result of high investor demand have moved Slovakia into an elite European club. 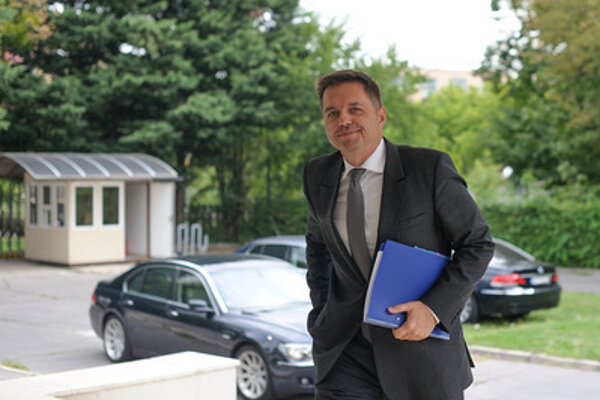 Slovakia sold its government bonds at the lowest ever interest rate, and negative at that, with the country now borrowing funds at what amounts to the third best rate on the market.

“That Slovakia enjoys a good reputation among investors is also attested to by the fact that not only did we reach record low interest rates, but that Slovakia’s bonds were ... sold off for negative yields,” said Finance Minister Peter Kažimír when commenting on the deal as cited by the TASR newswire.

Slovakia’s Debt and Liquidity Management Agency (ARDAL) auctioned off government bonds worth a total of €197 million in two auctions on October 20. In an auction involving sovereigns maturing on November 28, 2018, the agency accepted bids worth €112 million. The interest rates were negative, the lowest one was -0.0761 percent p.a., the average rate stood at -0.0449 percent p.a. and the highest rate equalled -0.0012 percent p.a.

In practical terms, Slovakia borrowed €112 million for negative yields, but when the funds are due – in three years’ time – the country will repay a lower sum of money than it borrowed.

“In essence, those who lent us the money will actually pay us for the loan,” said the minister, adding that regarding government bonds in Europe maturing in five and 10 years, only those issued by Germany and the eurozone’s temporary bailout fund trade at even lower interest rates.

According to the minister, the terms under which Slovakia sells its bonds clearly show that “creditors are confident that Slovakia will pay the loan back”. He added that, in terms of public finances, Slovakia is now better off than countries such as the Netherlands and Belgium and no doubt better off than non-eurozone countries like Poland and Hungary.

ARDAL head Daniel Bytčánek praised the benefits that the negative yields on debt bring to the state budget.

“We expect to attain savings worth €30 million this year in servicing our debt,” said Bytčánek as cited by TASR. “This amounts to €120 million in cash terms.”

Slovakia has been managing to borrow money for advantageous rates already for a longer period of time.

“The whole year can be marked as a period when we have historically reached the best rates,” Tomáš Kapusta of ARDAL told the Hospodárske Noviny daily as Slovakia had sold bonds at negative interest rates also in February and April.

Nevertheless, Tatra Banka analyst Juraj Valachy warns that low interest rates also pose a problem, as they do not force governments to reform because the financial market does not reflect the actual quality of public finances.