HOW Slovaks’ ancestors protected themselves against evil powers, but also how they used the darkest period of a year for magic rituals and fortune-telling can be watched in the Upper Nitra (Hornonitiranske) museum in Prievidza. 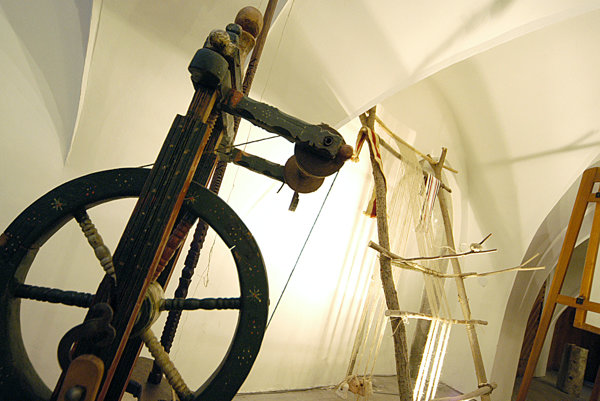 The time between St. Catherine’s Day (November 11) and St. Lucia (December 13) used to be called Witches’ Days, as women who could tell people’ fortune were perceived as witches (bosorkas or strigas in Slovak, a male using magic was strigôň).

The first day was the feats of Catherine, when people defended against evil with garlic, museum pedagogue Ján Vingarik told the TASR newswire. Garlic was eaten, used for smearing on doors, door-handles, locks, and latches. Women were strictly forbidden to do any work on this day, especially spinning and sewing, so that their fingers would not fester during summer works. A superstition said that if the first person to enter a house on St. Catherine was a woman, dishes will be smashed in it for the whole year to come. Young single men made rounds in the village in female clothing and in masks. Tools from a house where maidens were living were stolen and secretly removed and hidden.

Superstitions concerning love happened too, for example, when girls put papers with boys names in the water while cooking dumplings: the first paper to float to the water surface supposedly bore the name of one’s future bridegroom. Other magic rituals included jabbing needles into a willow-tree, strewing sawdust from the lover’s house to the girl’s house, etc.

The last of the balls and dance parties for the year were organised on this evening, ending the period of weddings and feasts and starting the time of Advent.

The next witches’ day (stridží deň) was St. Andrew’s Day, November 30 – probably the most famous day of this period. Girls poured molten lead into cold water to see the profession of their future husbands, slept on male trousers to dream about their prospective spouses, shook fences, knocked on wells, waiting from which side a barking dog will come – from that corner, their future man may come. Again, wool spinning was forbidden, to prevent sheep getting fluke or being eaten by a wolf.

In some regions, St. Barbara’s Day was also included in the witches’ days – the patron saint of miners was especially esteemed in mining areas, such as around Prievidza. On that day, girls chipped off small cherry branches, put them in their rooms and watered them until Christmas Eve – if it blossomed, they would marry the next year.

On St. Nicolas’ Day (December 6) rounds were made by St. Nicholas, a devil and an angel. However, this ritual arrived rather from towns to the countryside. Originally, an entourage marched across villages, composed of a farmer with a fake horse and bear, Vingarik said.

The most important of these days was St. Lucy’s Day, December 13, when dark powers culminated, including that of witches. While in the neighbouring countries, Lucy or Lucia is perceived as the impersonation of light, in Slovak culture her feast day is felt as the most important witches’ day, ethnologist Petronela Rágulová told the SITA newswire. The activities of strigas were most intense then. On the eve of St. Lucy, people used to eat garlic, sprinkle households with holy water, make circles around wooden cabins, stables and barns. Young men roamed around the village, cracking whips to avert evil.

“From oral tradition, we also know a ritual of making a wooden stool on St. Lucy’s Day,” Rágulová told SITA. “It was a wooden stool made from St. Lucy to Christmas Eve, without the use of any metal nails. People were supposed to bring it to Midnight Mass on Christmas Eve, and sit on it – it should have enabled the person to clearly see who is a witch in the village.”