STAND-UP comedy is a genre with a strong tradition elsewhere, but has only recently come to Slovakia. Thus, it seems to make sense to offer this type of show in English. 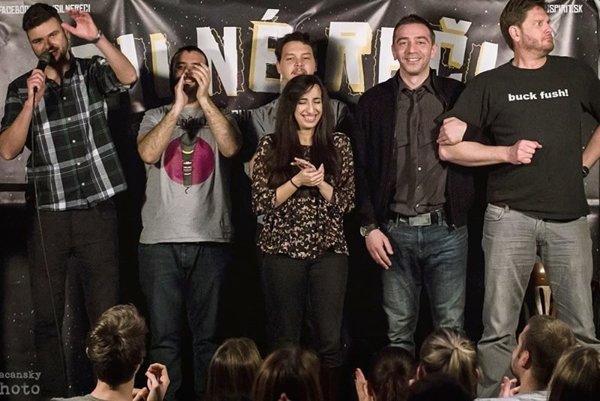 After an attempt a few years ago, however, there was silence. Beginning in 2016, the Slovak stand-up comedy team Silné reči organised an International Edition in English, mixing Slovak and foreign comedians.

“The idea has been here for a while,” organiser of Silné reči Ján Gordulič said for the Slovak Spectator. “But who helped make it reality was our Iranian colleague Siavash from the Bratislava expat community. People flocked to the club [Nu Spirit Club] to the performances of him and his sister, and sometimes one of his foreign friends who play with the idea of stand-up joined in. It started to look as if we managed to have enough comedians to put together an English show.”

In the January 7 edition, the forces were balanced: three Slovaks (Gordulič, Martin Hatala and Michael Szatmary) against three foreigners (Siavash Alamaghdan Motlagh; his “sister, or girlfriend, or both”, as Gordulič put it, Nasi A Motlagh, and “American surfer” Eric Lessner). It seemed that non-native English speakers prevailed not just among performers but also among the audiences – but then, this is hard to determine based on a brief enquiry among visitors.

Foreigners added new points to the hot, topical issues discussed, like how does it feel as a foreigner during the recent migration crisis, or what is Slovakia like as a guest country. Sia(vash) pointed out: “When asked to sum up Slovakia in one sentence, I said that it is a country where the impossible is still impossible.”

The club seemed to be packed, and Gordulič confirmed this: “This was our “better-standard” evening. We normally sell around 170-200 tickets, and this is the case also now,” the organiser-comedian said, adding that the 2-euros lower introductory price may have played its role, too.

The next Silné reči International Edition will be on February 4 at the same location, Nu Spirit Club in Bratislava, with the goal of continuing it regularly once a month, according to Gordulič.

“The audience reacted in the same way as at Slovak performances – the stand-up comedy genre is entertaining for them and they want to come and laugh about things people do not usually discuss aloud and openly; be it in Slovak or in English,” Gordulič summed up.