THE REAL estate development fee passed by the parliament in November 2015 should help municipalities build new infrastructure and facilities, but the extra costs will disproportionately affect people living in apartments – many of whom have lower incomes. 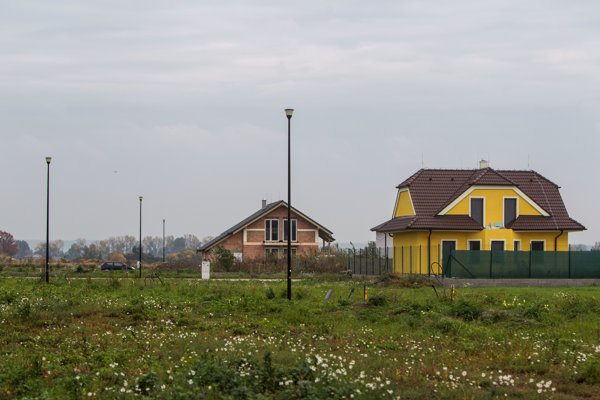 Family houses up to 150 square metres will be exempt from the fee, but blocks of flats will have to contribute to the city’s budget, and the additional costs will be transferred to residents.

“Simply said, the people who cannot afford a family house will be disadvantaged,” said Juraj Suchánek from the Institute of Urban Development (IUR) that campaigned against the current form of the law.

The Union of Towns of Slovakia (ÚMS), one of the supporters of the law, thinks that it is an effective anti-corruption tool that eliminates the potential negative effects of urban development.

“If a municipality decides to allocate the fee, it must be via statutory order that will specify the requirements according to the particular conditions,” said Marián Minarovič, general secretary at ÚMS.

The law was proposed to the parliament by Žilina Mayor Igor Choma and Košice Mayor Richard Raši with an aim to boost municipal budgets. Money can be used for the development of infrastructure and amenities, for example building kindergartens, playgrounds or improving road and street infrastructure. However, urbanists point out that the law in its current form will be a pretext for corruption and push the prices of housing up, as it increases the overall costs.

“The bill does not determine the application of the fee in the area of greatest burden caused by the new construction, which will be more expensive and the costs related to induced investments may double,” said Tatiana Prokopová, partner at Squire Patton Boggs, an international legal practice.

The Institute of Urban Development agrees.

“Despite the ambitions described in the original report, the law can have exactly the opposite effect as expected,” said Suchánek. “We expect that the fee will be fully reflected in the prices of the new flats in the form of a new tax.”

IUR recommends the realtors give their clients fair information on how much of a property’s price comes out of the fee. Clients then track where their money is being used.

Moreover, the law gives an exception to family houses up to 150 sq meters so it is unlikely to help mayors in smaller municipalities who will remain dependent on other fees. Residents of small houses will nonetheless send their children to the same kindergartens built from the money collected in the fee, Suchánek mentioned.

“The law will have little or even a negative effect on small municipalities where small houses up to 150 square metres predominate,” said Suchánek, adding that it will support suburbanisation – growth of areas on the fringe of cities.

People from Čierna Voda near Bratislava already expressed their disagreement with the fee in an open letter. They pointed out that family houses represent greater intervention into the environment than blocks of flats, therefore the exemption does not make sense.

Similar fees are used in cities around the world that boast strong development. Vancouver provided inspiration for this version of the law.

The city is funded from the municipal taxes and also from the fees paid by the developers. The money is used for additional development in the area where the project is planned.

“The city obtained a new tool that can improve the construction projects,” said Ivana Skokanová, the speaker of the Bratislava mayor’s office. The money can be used for the development of the area near the construction site and help the city’s budget.

“It is a common practice that the investors finish a project but do not cover the additional expenses and that these remain on the municipality,” she explained.

During the process of negotiation, the Union of the Towns of Slovakia and IUR insisted that in order to bring the desired effect, the fee should be paid by all builders. They also wanted to limit it to no more than 10 EUR per square metre. Eventually, MPs from the ruling Smer party added many exceptions to the law, which blunted its effect.

The fee, to be between €10 and €35 per square metre, can increase the price of a real estate by 5 – 10 percent, which is a significant sum for the people seeking low-cost housing options.

Marián Hudák, senior consultant at Cushman & Wakefield, said an apartment in a residential building would likely increase by up to 5 percent.

“Originally, the law had to finance infrastructure that was necessary around new construction but it now affects wide-scale reconstructions that require permission to build,” Suchánek explained. “Now it will also cover additional work on already standing buildings.”

There are limits on how the collected money can be spent.

“The fee can be allocated and used only for the investment related to the construction, in the form of social, technological and commuter infrastructure, or on the natural environment,” said Minarovič of ÚMS.

“The law does not guarantee that the money will be used for the infrastructure related to the construction project,” said Suchánek. “It carries the danger of corruption because the municipalities can introduce the fee even for small zones.”

“For example, the statute of the city of Bratislava does not contain a note on the local fee for development,” explained Prokopová. “Unless it allows for the fee to be administered by the city neighbourhoods, it will be administered by the magistrate. Without such regulation it is possible that the local fees for development in the city district Nové Mesto will end up, for instance, in Karlova Ves.”

The law on the real estate development fee will come into effect only in November 2016, therefore it is too early to speak about particular projects. Nevertheless, according to Skokanová, it will increase the budget of the city that can be used for infrastructure projects.

“The fee also strengthens the administration of the towns and villages,” added Jozef Turčány from ZMOS. “Negative aspects will show up only after the application of the law.”

Minarovič noted that further amendments to the law can help rectify short falls once it is implemented.