AFTER the results of March 5 general election were announced, it looked like a stalemate, although there are some possible combinations that could create a government. 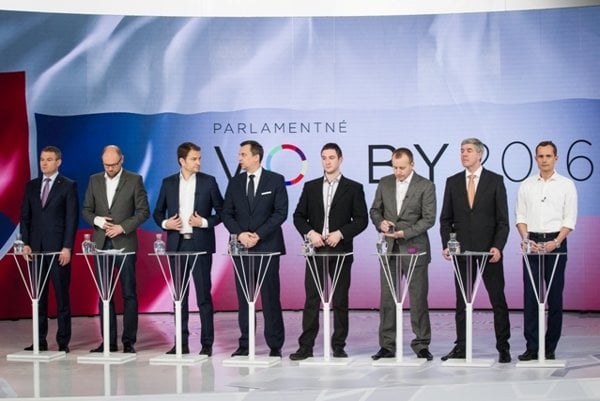 POst-election debates of parties which made it to parliament. (Source: Sme)
Font size:A-|A+0

Already on the evening of March 6, the winning Smer party and the second strongest party, centre-right Freedom and Solidarity-SaS (until now in opposition) started efforts to form a government through their respective chairmen, Robert Fico and Richard Sulík, the Sme daily wrote on March 7, though not together.

The most probable solution is a coalition formed by Smer, the Slovak National Party-SNS (not in parliament last term), and opposition parties Most-Híd and Sieť, which would comprise 85 chairs in the 150 member parliament.

Another potential solution is a government composed of SaS, Ordinary people and Independent Personalities-NOVA (OĽaNO-NOVA), SNS, Most-Híd and Sieť, with support in parliament of Boris Kollár and his Sme Rodina (We Are Family) party that would have two more votes.

Any new ruling coalition to come out of political negotiations is likely to face several problems, Sme wrote. Eight parties have made it to the parliament: apart form those already mentioned are also the anti-establishment People’s Party – Our Slovakia (ĽSNS) of Marian Kotleba (8.04 percent, 14 chairs), and anti-establishment Sme Rodina / We Are Family of Boris Kollár (6.62 percent, 11 chairs). This indicates instability that may complicate Slovakia’s position abroad due to the country’s presidency of the Council of European Union, starting in July.

The narrow margin of the winning Smer (28.65 percent or 49 chairs) can cause problems as the party will have to look for at least two (or maybe three) coalition partners.

The nationalist Slovak National party (SNS – 8.64 percent, 15 votes) was also helped by the success of Kotleba and ĽSNS.

SaS leader Sulík, on March 6, hinted that both SNS and Sme Rodina would be acceptable for his party as coalition partners, Sme wrote.