Two weeks after parliamentary elections I went to Revúca to test some of the hypotheses explaining the election results. I wonder how many of the 17 percent of locals who voted for the party of the regional governor Marian Kotleba have noticed that the roads administered by the regional government have not improved at all. 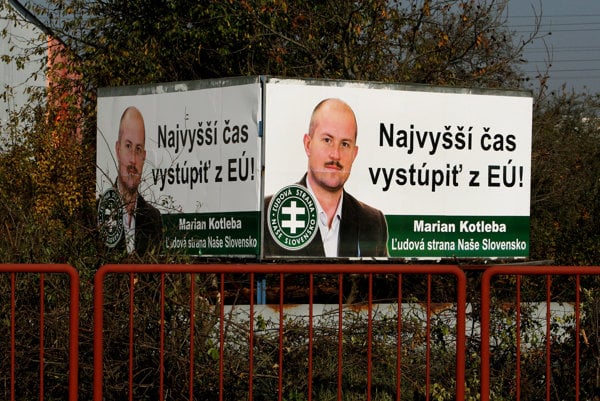 In Zvolen, in Nitra, near Brezno, there are billboards in which Kotleba thanks voters for support. (Source: Sme - Ján Krošlák)
Font size:A-|A+

My colleague turns to a big map of Slovakia right behind his desk and asks where Revúca is. Somewhere in Central Slovakia…the finger moves from Banská Bystrica towards East and then slightly down…and here it is, the capital of one of Slovakia’s poorest regions despite being located in a beautiful environment nearby the Muránska planina National Park, a few caves including one enlisted on UNESCO World Heritage List and a handful of castles.

Two weeks after parliamentary elections I took my backpack and went to Revúca to test “on the field” some of the hypotheses launched by talking heads on TV screens to explain the elections’ results – displeased citizens gave their protest votes to extreme and “non-standard” political entities. After slightly under six hours spent on a bus travelling from Bratislava I reached Revúca on a Friday afternoon.

The first sight: a nicely reconstructed central square with historical buildings competing for attention with the metal cubicle of a discount supermarket. But locals clearly have a sense of humor – just across the street from the bus station a pharmacy called “Cannabis” seems eager to offer some relief to visitors feeling dizzy after travelling on the bumpy narrow roads leading to town. I wonder how many of the 17 percent of locals who voted for the party of the regional governor Marian Kotleba have noticed that the roads administered by the regional government have not improved at all. In Zvolen, in Nitra, near Brezno there are billboards in which his party thanks voters for support and promises not to disappoint them.

Planning to go to a local community center in Revúca I asked two young people for directions. Smartly dressed and standing next to a collection of religious leaflets they quickly asked me what I am looking for on that particular street because “Roma live there. There are only blocks of flats full of Roma there”. Jesus Christ’s warm eyes staring at us from the cover of one of the booklets almost muttered “love thy neighbour”. And off I went to meet them with my experience of covering such topics whispering at the back of my head – here we go again, the far right comes to a poor region with a significant Roma community, usually long-term unemployed and living on benefits, and promises to install what they call law and order. Many non-Roma locals, struggling with low-paid jobs or on benefits too, clap their hands ignoring the fact that the source of all their sorrows, unemployment, is not caused by their Roma neighbours.

I have already seen it many times but what I have never seen in Slovakia is ordinary people taking to the streets to show some solidarity with their fellow Roma when they are targeted. Usually only a handful of NGOs and activists issue some statements. They have been warning for years about the rise of the extremist movements banking on the so-called “Roma card”. And it does not matter if someone lives in Revúca or ran away to richer Bratislava and prefers not to look back.

I found the community centre closed for the day but around it there were plenty of people eager to tell me their stories; from Dana who must work as a caretaker in Austria to Erik and Mário who although disappointed by Slovak politicians, felt compassion for refugees at the Macedonian border “who fled war and live like animals now in the mud”. I spoke to local butcher Emil who has no problems with his Roma clients and to a lady owning a glazier shop who despite trying to avoid “getting angry with politicians at 4pm on Friday”, delivered a solid analysis of investment opportunities in the region, off the record because she seemed to associate the microphone with politicians who made her angry.I met the young owner of a guesthouse who kept on asking why do I think Revúca deserved special attention when there are many towns like that in Slovakia.

And I was followed around by a young football tennis player who was sure that as a journalist I can persuade Ronaldo to come to Revúca to see him play. This is what heaven looks like for any Bratislava-based journalist still interested in talking to ordinary people but who is more often than not told off when trying to do so on the streets of the capital. If that journalist is a foreigner then the openness and curiosity of locals is a sweet bonus. In 15 minutes in Revúca I have received more questions about my own country than in three months in Bratislava, and I know from experience that the level of knowledge on this topic in the Slovak capital is not high even among educated people.

The day ended with some specialty of the local cuisine which despite a provocative name Gemerské guľky s dynamitom (Gemer style balls with dynamite) proved peacefully tasty. Then another kind of cultural shock for the Bratislava-based journalist – the cook improvised some salad for me on the spot! I guess he did not know that in Bratislava the rule is to angrily flip through the menu pages to show to the daring customer that the restaurant has only three standard types of salad from which only the cabbage one is in fact available as the kitchen ran out of other types of vegetables. This is how a simple salad had suddenly got a special taste. The beer, however, was almost as expensive as in the rich and far-way Bratislava. They had only Czech beer on offer, maybe as a tribute to the many locals who work north of the Morava River and whose remittances support life back home.

You can listen to the report from Revúca broadcast by Radio Slovakia International here.