Despite the addition of new routes from Bratislava and Košice Slovakia is still lacking air links with the main hubs in Europe. 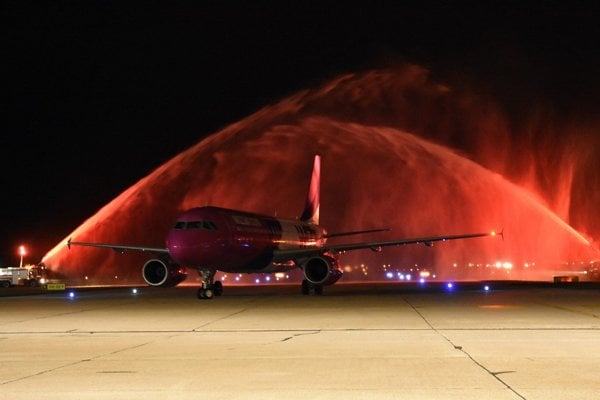 “Passenger transport at the Bratislava airport has improved but there is no change in terms of the dominant position of the low-cost carriers (LCC),” Antonín Kazda, head of the Air Transport Department at the University of Žilina told The Slovak Spectator.

Despite the addition of new routes from Bratislava and Košice, including Madrid, Brussels and Dubai, Slovakia is still lacking air links with the main hubs in Europe.

The frequency of flights in Slovakia remains among the lowest in Europe. Passenger per inhabitant statistics, which measures traffic, gives Slovakia the statistic of 0.3 passenger per inhabitant. This is far behind the EU average of 1.8, Ľubomír Koršňák, analyst with UniCredit Bank Czech Republic and Slovakia, cited Eurostat data.

Many of the problems mentioned by Kazda would be left unnoticed by the occasional Slovak traveller. The lack of services and good connection times emerges only when comparing Slovak air traffic with European standards.

“The main problem is that air traffic is not among the government’s priorities,” said Kazda. He criticised the lack of strategic planning and lack of funding of the regional airports. “The problems of the airports are not discussed with professionals. In terms of tourism, it is practically impossible to easily get to Slovakia.”

“Apart from Košice, which flies to Vienna and Prague once a day (via Bratislava), there are no links from the regional airports to the hub airports that would be suitable for business travellers,” said Kazda, adding that it causes outflow of the potential travellers to the airports in Vienna or Budapest. “Even the Ryanair route to Brussels is a night flight, which is unsuitable for people on business.”

Moreover, it is a typical LCC flight without through ticketing (when a passenger buys one ticket and can change between the planes freely) and use baggage transfer services.

“Key management positions at the biggest airports are filled by political nominees, who have different priorities than effective operation of the airport,” said Kazda. “No wonder that the announcement of the shortest regular line between Bratislava and Vienna was mocked.”

Kazda specified that regional lines are justified only between Košice and Bratislava, however, it will lose significance after the construction of the highway and high-speed railway is completed.

On the other hand, the Transport Ministry views the stabilisation of air traffic in a positive way.

“Regional airports are a huge potential for the development of tourism, which is confirmed by the record numbers of tourists in the past year,” ministry spokesman Martin Kóňa said.

Kazda pointed out that the government should focus on the operation of the regional airports that are dependent on funding.

“The operation of regional airports with up to 250,000 passengers a year requires government funding,” said Kazda.

“In such situation, the connections could be provided under the EU Public Service Obligation scheme (PSO), which is a common practice in many countries,” said Kazda.

In 2015, Bratislava’s airport served 1,564,311 passengers, which was a 15.4 percent increase from the previous year, spokeswoman Veronika Ševčíková said, the first double digit increase since 2006 and a reversal of the declining numbers from 2008 onwards.

Bratislava has managed to attract two new low-cost carriers. Russian low-cost carrier Pobeda operates seven flights a week to Moscow and Wizz Air now flies to Skopje, in Macedonia. Irish low-cost carrier Ryanair opened a permanent base in Bratislava in March 2015, which is ranked among the biggest achievements of the airport.

“Ryanair is our long-term, transparent partner, that transported 8 million passengers by September 2015 and we are proud of the cooperation,” said Ševčíková.

On the other hand, experts point out that Bratislava relies too much on the low-cost carriers and is lacking permanent links to the biggest European hubs.

“Bratislava is dominated by Ryanair, which fends off most of the competition, and Vienna airport with connections to all major destinations is just a 30 minute drive,” Kazda said.

“Slovak airports are serving about 2 million passengers a year but another 3.5 million use the airports in nearby countries in Vienna, Budapest, Katowice, Krakow and Prague,” Kazda said. It is mainly an economic problem, as Slovakia loses money via passenger taxes, parking fees and tickets purchased by foreign companies.

Even the Slovak companies AirExplore and Go2Sky operate abroad due to the complicated situation in the domestic market.

The general assembly of the International Civic Aviation Organization (ICAO) will take place during Slovakia’s EU presidency, where Slovakia will speak on behalf the whole EU.

“Slovakia as a member state will respect the new European Strategy for Aviation, which was approved by the European Commission in December 2015,” said Kóňa. “It is considered a breakthrough initiative that will support the European economy, strengthen industrial foundations and contribute to the EU’s leading role in the world.”

“It means that we secured connection with a third big hub airport,” said Juraj Tóth, the marketing manager of Košice airport. “The LOT company offers flights to more than 60 destinations, including North America and Asia. It will be via a connecting flight from Košice.”

From April 2016, Ryanair will redirect its flights to Brussel-Charleroi to the main Brussel-Zaventem airport in order to improve connections with the European capital during Slovakia’s EU presidency.

Further improvements could be made by more attention by the government and greater involvement of the regions in the air traffic. “Transport has a significant impact on tourism and it not restricted only to buses and trains,” Kazda said.