Blog: What's in a title?

Slovaks love titles, plenty of them, both in front and after their names, which creates comical situations, especially for foreigners who are not used to them. 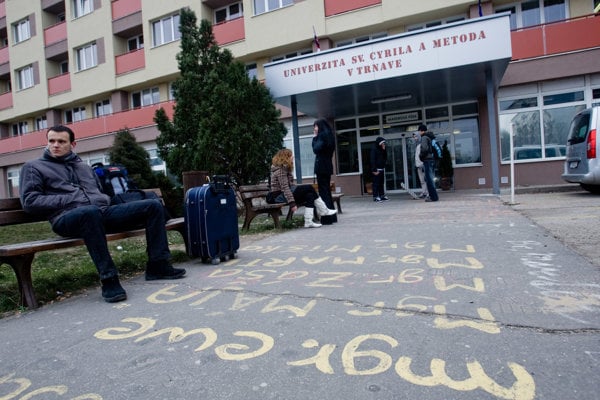 Slovaks love titles, plenty of them, both in front and after their names. These are those “Mgr”, “Ing”, “Bc”, “PhDr”, “RNDr“, “MUDr”, “JUDr”, “PaeDr”, “MVDr”, “Ing. Arch”, “PharmDr” “CSc” and so on that you can see everywhere from business cards to email addresses and name tags for postal boxes. An “over-educated” Slovak living in the concrete jungle of Bratislava’s borough of Petržalka has to face the tough decision of having to choose which “Mgr” or “PhDr” to sacrifice from her or his name tag as the postal box is quite small, being built in the era where the working class was supposed to rule the country (and had no university degree). My favourite of all times is “doc. Ing Mgr. et Mgr. X Y PhD”. Some might argue that these titles do not necessarily prove that their holder has some real expertise too as there is no shortage of so-called “diploma factories” in Slovakia, meaning faculties which do not intensely challenge their students before handing them a degree. The beauty of this abundance of titles is their seemingly never-ending ability to create comical situations, especially for foreigners who are not used to them.

It had taken a nice lady from the HR department of my company two months to research which is my correct title in Slovak as I hold an MSc in broadcasting journalism from an American university and an MA in economics from a university in my native country. I did not care but she did because “it will give you a different status, you will see”. Some years later, when one “Bc.” from a press department picked up on my far from perfect Slovak with a comment about poor education, I remembered that argument about status and I was grateful to my colleague that due to her dedication I am officially “Ing. Anca Monica Dragu MSc“- two titles and three names in one! In case you are wondering, in Slovakia economics graduates are engineers, a fact which I suspect is still hard to swallow by some mechanical engineering graduates. Well, life looks different when I am addressed “Vážená pani Ing. Dragu MSc” (Dear Mrs Ing. Dragu MSc) What a pity that the content that follows in the body of the text is sometimes less impressive…

Apart from postal boxes, press conferences can also prove to be emotionally challenging for the “inflationist title-holders”. Imagine a table with 3-4 speakers, each with a rather big name tag in front of them with 2-3 titles at the beginning and at least one at the end getting ready to impress the nation. Suddenly this setting is disturbed by a pesty TV cameraman who wants to take them away because “they are annoying, take too much space and will not be visible on camera anyway”.

I personally really like two Slovak titles. The first is “MUDr“ which comes from the Latin Medicinae Universae Doctor and it is the Slovak version for M.D. Once joking in front of a doctor I was interviewing, I used a word play with MUDr and “múdry“ which means “wise“ in Slovak. He replied with the speed of an etymologist “Medzi “MUDr” a “múdrosť” nie je žiadna súvislosť“ (There is no connection between a “medical doctor“ and “wisdom“) ....We had a good laugh when he realised what he had just said. “Speaking from experience, huh?“

Now to add to the confusion “pani doktorka/pán doktor“ is used to address a law graduate too, even one without a PhD title. I know at least one caring non-Slovak-speaking Mum who thought otherwise and asked that friendly “pán doktor“ neighbour whether he could recommend her a colleague, or a good paediatrician who speaks English, only to be told that as the owner of a law practice he does not know any paediatrician.

And talking about PhD titles, it took me some years and a strange congratulation addressed to a friend to learn that it’s the same as “CSc.“ The latter was used until 1996 and then replaced by the international term PhD. When she finally decided to use only PhD after her name everywhere I enthusiastically congratulated her for the doctoral degree thinking it’s a new one. She let me say how impressed I was before bringing me down to earth. Oh, save our souls from the jungle of Slovak titles, please!