UNESCO Director-General Irina Bokova paid a two-day visit to Slovakia to strengthen cooperation and generate ideas, reminding the youth of their importance. 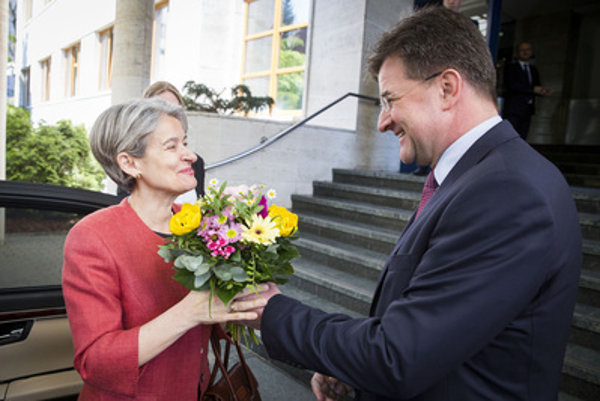 In her lecture at Comenius University in Bratislava on May 6, Bokova said that today’s young people are the first generation that can put an end to extreme poverty and the last that can resolve climate change.

“The future is in this room,” said Bokova to an audience full of students. In her lecture called Empowering Youth, Promoting Diversity – New Foundations for Resilience and Peace, she described the young generation as the most travelled, the most educated and the most open-minded, as well as the one that carries the heaviest burden of transformation. One of UNESCO's tasks is to strengthen the status of youth, and education is the strongest force, she said, as quoted by the TASR newswire. Wars are incited in people’s minds, and that is where defence should start, she said – for instance, around 60,000 people support the Islamic State on Twitter.

“It’s easy to work with people of similar thinking, but we have to work with those who reject our thoughts,” Bokova noted. “We need to involve them in transformation. My key message today is that all societies have strong foundations on which we can build.”

Comenius University rector Karol Mičieta presented Bokova with the university’s commemorative medal for support of education. It should also serve as a memento of the day, of Bratislava and of Slovakia.

Bokova also met Education Minister Peter Plavčan (a Slovak National Party/SNS nominee) on May 6 as part of her official visit to Slovakia. The two officials discussed the fight against intolerance and violence which forms part of the Education 2030 Framework for Action agenda under the auspices of UNESCO. Foreign Minister Miroslav Lajčák met UNESCO Director-General Irina Bokova, too, praising UNESCO’s mission as a leader in science, education, culture and the protection of world cultural heritages. In the context of the current global situation marked by violence and military conflict, Lajčák and Bokova concurred on the need to support UNESCO’s efforts to protect the historical and cultural legacies, artefacts and cultural values of countries plagued or threatened by war. In this respect, Lajčák declared Slovakia’s support for the Unite4Heritage initiative, conceived as a response to a number of unprecedented attacks on UNESCO world heritage sites. Lajčák and Bokova also broached various aspects of the migration.

On the same day, Bokova met with Environment Minister László Solymos (Most-Híd) and praised the headline issues set to be pursued by Slovakia during its Presidency of the EU Council in the second half of 2016, TASR wrote. Slovakia’s main priorities include water protection, boosting the importance of water and its rational use. Slovakia has world-class experts in this area. Solymos and Bokova discussed projects aimed at water and climate protection to be carried out jointly by Slovakia and UNESCO during the EU presidency. The Slovak Trade and Industry Chamber (SOPK) chair Peter Mihók also met with Bokova, leading to the drafting of a memorandum on cooperation between UNESCO and SOPK, slated to be inked by Mihók during a future visit to Paris.

Later in the day, Bokova attended a roundtable debate on Creativity and Innovations in Theory and Practice at the Slovak Academy of Sciences (SAV) in Smolenice in Trnava Region. She was invited to take part in the debate by SAV chairman Pavol Šajgalík, with SAV Presidium members, selected SAV staff members and creativity experts from business, culture and higher education also in attendance. Following the debate, Šajgalík awarded Bokova SAV’s top prize – the Gold Medal.

A trip to UNESCO sites

The next day, Bokova held roundtable talks with mayors of towns and villages listed on the UNESCO World Heritage List in the medieval town of Levoča. During the talks, Bokova stressed that UNESCO’s main job is to harmonise modernity with historical heritage. Levoča mayor Milan Majerský said they talked about the need to ensure a sufficient volume of money for the reconstruction of historical monuments.

"On one hand, it is an advantage to have historical monuments, while it is also binding and a kind of burden on the other. We need to find an optimum way to be able to save these monuments for further generations,” he said, as quoted by TASR. The talks were followed by a short sightseeing tour around the town and a visit to St. James Basilica to take in a brief organ recital. “It was an unforgettable experience for me to see Master Paul’s Gothic altar," said Bokova. The Levoča mayor said they made no extra preparations for Bokova’s visit. “We made one little step this year – we have restored the Cage of Shame,” mayor said.

“We gradually want to reconstruct everything we have in the town in this way. Sometimes it is critical. We would like to modernise, but we often forget how easy it is to destroy and how difficult it is to build something," said Bokova. According to her, UNESCO also wants to support modern initiatives and creativity.

Born on July 12, 1952 in Sofia, Bulgaria, Bokova became UNESCO’s tenth director-general on November 15, 2009, making her the first woman and the first Eastern European to head the agency. At UNESCO she advocates UNESCO reform, gender equality, improved education for all and the prevention of funding for terrorism. She also fights against the radicalisation of youth and puts an accent on developing science in sustainable development, water resources management, security for journalists and freedom of speech.

In February, Bokova was named as Bulgaria’s official candidate for the post of UN secretary-general.

Thank you for singing up. Shortly an email will be sent to the address you provided to verify your e-mail.
Error! Please try to register again later, your e-mail was not registered.
Your email is not in a correct format.
Please confirm you are not a robot.
Share on Facebook (91)