Hamšík has a free hand

Slovakia's top player travelled a long road to lead his team in Euro 2016. 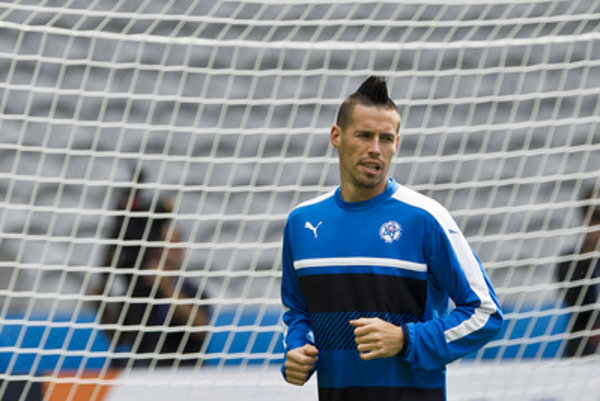 Everyone is replaceable; but there are football players without whom coaches, teammates or fans can only hardly imagine their team functioning. One of them is Marek Hamšík.

Since childhood, he was predestined to belong among the exceptional individuals. Since his football beginnings, his parents as well as coaches consciously supported his leadership skills.

Hamšík has never been scared by it; although in the youth categories, he used to play also against boys two or three years older.

After he learned the basics in Jupie Banská Bystrica club, he went to toughen in both football and character at Slovan Bratislava. He also won the champions’ title with this club, in younger and older junior teams. After transfering to Italy's Brescia, he opened  the door to top world football. When he arrived to Naples, aged 19, his star began to shine fully – and it has kept shining for already nine years.

Besides this, he has become an integral part of Slovak national team; and as captain, he brought it to the World Cup 2010 in South Africa. Now, six years later, he leads national team at the European Championship in France. Although not a captain, he is certainly the most watched and key player of the Slovak team. “I do not care a bit my not being a captain,” he said, as quoted by Sme. “The team has chosen, and that is how it should be.”

The World Cup 2010 marked by sounds of vuvuzelas Slovak team proceeded sensationally to 1/8-finals. There, it failed to keep up with favourites, the Dutch, losing 1:2.

“A football player gets better each year,” Hamšík claims. “In six years, I have played a huge number of matches for Naples as well as the national team. I feel more experienced and even better prepared.”

The generation around Hamšík, Martin Škrtel, Juraj Kucka or Ján Ďurica, gets another chance. “There are several players here who played in Africa,” Hamšík stresses. “We have already experienced one championship first hand, and I am happy that we have advanced to a great tournament for a second time. Many generations do not achieve this. I am proud to play at two top national team events.” 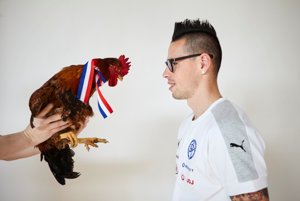 A decade ago, only a few fans believed Slovakia could qualify for two championships in such a short period of time. “When we talked to Marek in the past, he himself did not expect his generation to make it to the final tournament,” Hamšík’s father Richard said. “After Africa, everyone thought this was a rare feat. Only a few years later, they succeeded again. Marek is happy and perceives this as a great event.”

The national team’s coach, Ján Kozák, perked footballers up with energy and hope. “The team is excellent here,” Hamšík said. “Under coach Kozák, the team got glued together and we all are it together.  One can see it also on the playing field.”

Only a single one understood him

While in Naples, he has been considered a world-class midfielder for years, Hamšík was underestimated in Slovakia for a longer time. Only in the last qualification series did he show his qualities fully. In each match, he stood out.

“One has to say it openly,” Hamšík senior opines. “It is about how you believe in a specific player. Some coaches failed to understand Marek and did not give him such possibilities as coach Vladimír Weiss gave him in a certain phase, and to the full extent now coach Kozák.”

“Some people though he was underestimating the national team and was not interested,” his mother adds. “Marek has not refused it once. He did not made excuses with holiday season. He always attended the meetings and trainings.”

Hamšík was often placed in a nonsensical position which killed his creativity. Some coaches failed to use his qualities to full extent. Only the current Slovak national coach managed this – and gave his full trust in Hamšík who used it 100 percent.

In France, the Slovak team relies on the football thinking of Naples’ captain. He can stick to the ball in hard times; and his long straight shots are important at the championships. His teammates rely also on his shooting instinct: he has scored six goals for national team, including one already at the European championships.

“Hamšík grew up to be a strong personality,” coach Kozák said. “It also has to do with age. He has a different view, perceives team and surrounding circumstances in a different way. He has matured. He is surrounded by good players who suit him well. It is all organised in a way that he can show his skills on the playground.”

Hamšík got to learn how important is coach’s trust during his last two seasons in Naples. Last year, Rafael Benítez regularly withdrew him form the game around 60th minute. “Even though Marek played well, he got replaced regularly in times when the match got into breaking point; Benítez was famous for this everywhere he worked,” Richard Hamšík says.

Before this season, Benítez was replaced by Maurizio Sarri –at a time when Juventus Torino offered 25 million euros for Hamšík. Sarri was against Slovak footballer leaving, and when recovering from the shock, he told Naples’ president De Laurentis, and Marek personally that if the latter left, he would resign. Hamšík commented that he was delighted, as it showed Sarri’s concern and engagement, and gave him encouragement. Sarri stated that what Hamšík achieved in Naples in eight years cannot be compensated with bigger money in another club; while De Laurentis resolutely said to Juve: No, we will not give you Hamšík.

“We told him [De Laurentis] that Marek is our son but he can be his “football son”,” Richard Hamšík says. “We have never had any problem – even when negotiating contracts, he was always accommodating,” his son Marek, who belongs among best-paid players in Naples, adds.

It seems, though, that Naples is not among the top football teams and regardless of what Hamšík has achieved here, he should progress to a team of higher level.

He trained also in the dark

Most coaches came to like Hamšík. Walter Mazzari who trained in Naples for four years claimed he had never met a bigger professional than the no 17 of Slovak team. Even Benítez praised him, despite replacing him in every match. Marek never complained about this, although he was angry inside.

Currently, he is the crucial personality of Kozák’s team and hardly replaceable.

“It is a big honour for me to play ever more matches in national team,” Hamšík, a Banská Bystrica native, says. “I want to have them as many as possible, to have something to tell my children and grand-children.”

Hamšík’s football victories are connected with his character and inner strength. When he transferred aged 16 from Slovan Bratislava to Brescia, he got a youth contract.

“Then, he earned big money in Slovak terms but he was not satisfied with that,” Hamšík senior recalls. “He saw that there were much better possibilities. When he was doing well and received only 500 euros extra to his salary, he was disappointed. People from the club told him: Once you are good, you will make completely different money. He dropped his eyes, worked hard and succeeded.”

Parents believed in him form the very beginning, borrowed money when he needed to transfer to Slovan, and even sold their car. Each parent wants to do maximum for their child, according to Hamšík senior.

The risk paid off well in this case. Maybe also thanks to the fact that while other teenagers went to discos, Hamšík practiced direct free kicks at the Tehelné Pole stadium. And his girlfriend watched him from the stand. “Please come and do something with him,” the stadium caretaker called his parents. “It is dark and he is still training.”

“When I wanted to achieve something in my life, I had to train more and harder than others: My career speaks for me,” Hamšík sums up.