The summit taking place in Warsaw in early July brings initial results: Slovakia will be in charge of a NATO Trust Fund concerning explosive ordnance disposal and demining. 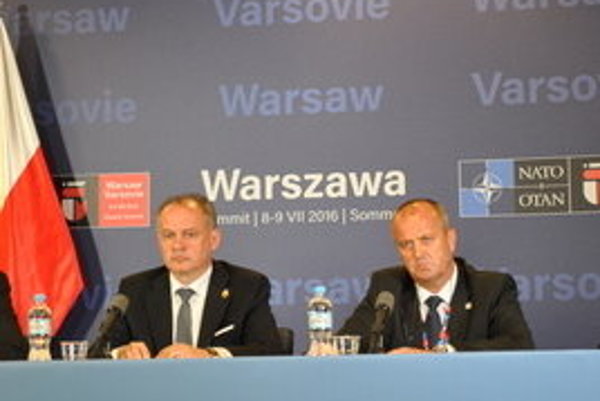 This information was delivered by Slovak President Andrej Kiska while leaving the NATO summit in Warsaw on July 9.

“NATO has set up a fund for demining and explosive ordnance disposal, and we, as Slovakia, have offered ourselves to lead and govern it,” Kiska told the TASR newswire, adding that this initiative has a humanitarian dimension. According to the Slovak president, more than 600 people have been killed and another 2,000 have been injured in Ukraine since the current conflict broke out due to blasts of various obsolete explosives.

Slovakia has enough experience with demining, Kiska noted. “We’ve provided training to people who demine territories in Ukraine, so it was logical that we've now been tasked to be engaged more actively in the issue,” the Slovak president said. Slovakia provided training to dozens of Ukrainian specialists in 2014 and 2015. The Slovak Foreign Ministry, which has become the guarantor of the Trust Fund, has already contributed €50,000. Other countries are also expected to join the initiative.

It had not been clear before the NATO summit in Warsaw whether Slovakia would stick to its earlier commitment on increasing its military spending to 1.6 percent of GDP by 2020; but it was good to see Slovakia confirming its pledge, Globsec Policy Institute director Milan Nič said on the same day. Apart from increasing the defence spending in general, Slovakia at the NATO summit two years ago promised to allocate 20 percent of its defence budget for modernisation of the military.

“From Slovakia’s view, the summit ended up well; perhaps even better than it could have, because a few weeks ago it wasn’t clear whether the government would confirm its commitments on boosting the budgetary chapter for defence, or not,” Nič said, as quoted by TASR. He stated that security does not feature prominently enough in the Government Manifesto and it seemed that NATO issues had been sidelined.

Apart from sticking to its earlier commitments, Slovak Defence Minister Peter Gajdoš at the summit in Warsaw on Friday announced that his country will dispatch up to 150 soldiers and 35 pieces of equipment to the Baltic countries as part of the Visegrad Four training mission next year. Soldiers from individual V4 countries – the Czech Republic, Hungary, Poland and Slovakia – will rotate in three-month periods, with the Czechs to be deployed first, then Slovaks, Hungarians and eventually Poles.

Moreover, NATO leaders agreed on the deployment of 4,000 troops in Poland and three Baltic countries on a rotating basis, for averting a possible armed conflict with Russia. Experts stress that it is an important signal, the Sme daily wrote on July 11. The US, Germany and the UK will lead the four new battalions.

The summit was held for the first time in one of the so-called eastern members of the alliance, in Poland. This fact was meant to show that the West does not plan to ease its policy towards Russia, not even two years after the latter’s annexation of Crimea.

In its official statement, the Russian Foreign Ministry said that NATO tries to demonise Russia and justify its steps to avert attention from its destructive role in the world and keeps tension in various parts of the world. NATO Secretary General Jens Stoltenberg said, as quoted by Sme, the alliance does not seek confrontation with Russia but rather wants to prevent it.

The NATO summit, expected to be perhaps the most important since the end of the Cold War, may have disappointed the Baltic states; but Poland seems content with the resulting plans. “This is a breaking point in the history of the Alliance,” Polish Defence Minister Antoni Macierewicz said after a meeting. US President Barack Obama is of a similar opinion, as he said that this was may be the most important moment of our Alliance in the past quarter of a century.