Rybanič: I have some fears I may go to prison

Filip Rybanič, the MP assistant and former bank employee who leaked bank account information as part of efforts to expose alleged wrongdoing by Interior Minister Robert Kaliňák, claims that his exploration of politicians’ accounts was legal. Rybanič tells the Sme daily that he would probably do it again. 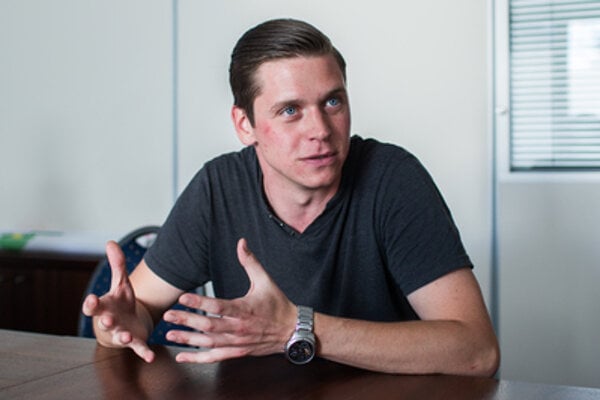 Sme: On July 4, you participated in a protest in Košice – were you not afraid they might boo you off?

Filip Rybanič (FR): No, I did not think about it at all. I must say that reactions of people surprised me, as they expressed very strong emotions. When I was coming to the stage, they showed it very loudly. I was quite surprised how big their support is. There were some 3,000 people and I think they all shouted.

Did you not fear negative reactions, or – rather – were you prepared for them?

FR: I counted on both options: some may find it nice, others less so. But from the reactions so far I have the feeling that positive reactions prevail.

So do you meet also with negative reactions? If yes, what do people blame you for?

FR: Me, I personally have not met with any bad reaction. Except from government politicians, that is. Maybe some of the comments published.

Why did you look at the accounts?

FR: I considered it my duty – as a bank employee — I should simply be interested in what happens on the accounts.

But most people would feel it is none of their business, especially when it concerns top politicians. Why did you do it?

FR: I followed the political situation, and I do mind what happens in Slovakia.

You are the assistant of SaS MP Jozef Rajtár; did you not do it at his order or recommendation – or anyone else’s?

FR: No, there was no order or recommendation.

What was the percentage chance you counted on that your activity will be discovered?

When you looked at the accounts did you not know you were doing something illegal?

FR: No, of course not. If any suspicion arises that something illegal may happen on any account, it is simply the duty of an employee to go there and check. In such a case, an employee can look at any account. There is no rule that I can only look at the accounts I administer. If an employee has any information, they must act. This rule is not used here very much.

When you looked at the accounts, you did not know you were doing something illegal:

FR: No, it was not illegal.

And how did it grow to the phase that it suddenly was illegal?

FR: Police came to me to my office and took all my things from me, plus the things I had with me in the bank which were deposited there. They took me for interrogation where I spent some 15 or 16 hours.

And was it there that you learned that what you considered your duty is in fact illegal?

FR: There, I learned that my suspicion was probably justified, as such a reaction is absolutely not standard. In standard cases, such things are not handled by the National Criminal Agency (NAKA) but rather by district police stations. Then, I realised that it is serious and that it probably was against someone’s opinion.

So you thought it was your duty to check accounts if there is suspicion of strange transaction on Tatra banka accounts; and suddenly, police came and said it was illegal.

FR: No: I am to be charged because I should have reported the information to someone else.

So your fault is not having checked the accounts but rather not giving results to authorised bodies?

FR: I wanted to report them to the bank. However, bank already then did not accept the motion form me. They argued that my employment was suspended then. I learned I had been suspended two days before NAKA came to take me. But I was going to work as usual before.

How many days were between you looked at the accounts and police knocking on your door,
FR: Ten days.

When you looked at the accounts, did you notify the bank immediately?

FR: No, it was after the situation evolved as it did, after the police detained me.

FR: That was the question, whom to notify.

But you had some boss in the bank, no?
FR: I had a superior; but I was simply worried as I found out certain information and I did not know whom to notify. It was information that should have concerned, among others, also the interior minister. And police are subordinate to him – I did not see it as a solution.

FR: I am a naturally suspicious person.

The prime minister said on TV he has information form Tatra banka that you had looked at more than accounts of Kaliňák and Ján Počiatek; but the bank denied it for Sme. Thus, it seems that one of these two lies.

FR: Probably one of them. I would explain the mistrust with some personal impressions of mine, as I was working there for more than three years. I knew Tatra banka, and I was considering also this possibility but my feelings were not the best.

What were your plans with the information, did you not mean to use them somehow?

FR: I did not plan anything. I really did not want to use it…. I had no real plan. It was rather my personal responsibility and probably also curiosity – whether this is real, as people say.

When you look at your feat and its consequences, would you do it again, or would you not undergo the same risk a second time?

FR: Hard to say, but I think I would do it again.

Despite everything you are facing now?

FR: Well. The question is whether I face what I could face in fact. Nothing  has been published in any way so far. The only thing that was published should have been my testimony which I had earlier deemed not relevant. The document that police probably sent to media as my testimony was absolutely not corresponding with that was my true testimony. It was much more extensive.

I start to have the impression you do not believe something grave could come out of this. Are you not afraid you could end up in prison?

FR: I have some fears. I am charged with a crime. As a bottom line, I was charged by the government that is here now. There are certain fears.

In what phase is your prosecution now?

FR: There will be some more interrogations now. And I have no idea what will happen then.

How would you explain to ordinary people what is the key problem in this case, Why should minister Kalinák resign?

FR: The problem is that interior minister and two more people obviously trade with strange people, and the only one being handled is a bank employee who knows about it.

You are not employed in Tatra banka anymore but you are still MP’s assistant. How do you see your future?

FR: So far, I am assistant and I am satisfied in this position. I have no drive to try handle anything else for now.