It claims to improve its communication with fans. 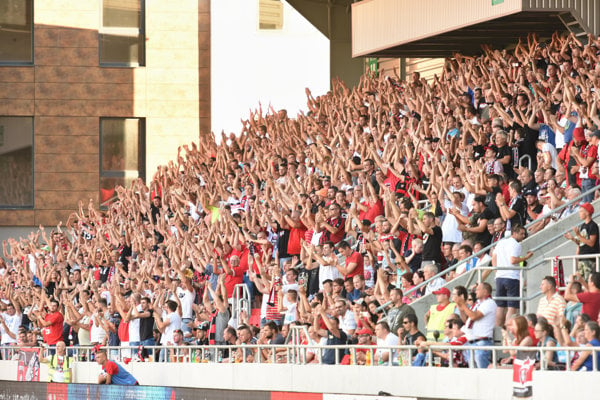 Fans at the stadium in Trnava during the August 4 match against FC Austria Wien. (Source: TASR)
Font size:A-|A+17

The Union of European Football Associations (UEFA) punished football club Spartak Trnava for disturbances and racist behaviour of its fans during the European League match at the pitch of FC Austria Wien.

The club will have to pay €81,750 and will play two following domestic matches under the auspices of UEFA without spectators, the SITA newswire reported.

As the Trnava-based club has already been knocked out of the 3rd preliminary round, after being defeated by FC Austria Wien, the ban will be applied on its future matches in the Champions League or European League.

“We are sad that the club has lost big money, but sadder because we will play our two following matches without spectators,” PR and event manager of the club Marek Ondrejka said, as quoted by SITA, adding that football is first of all for fans. “We however accept it as a fact and respect it.”

He also pointed to the gradual change in their approach to spectators. The last domestic match against Austria Wien showed they are on good pace. The stadium was sold out and fans were perfect, Ondrejka continued.

“No incidents, not even the verbal ones, occurred during the match,” he added, as quoted by SITA.