Leaving Slovakia is not easy 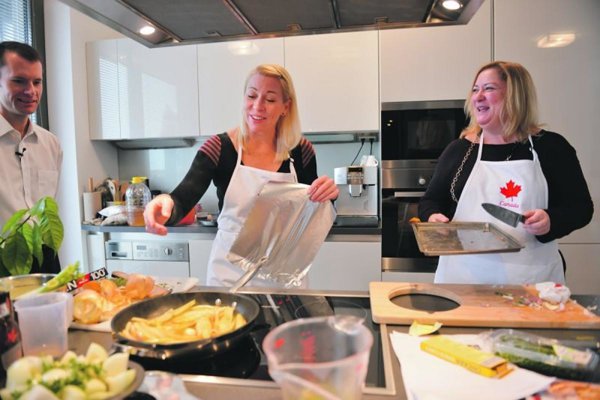 Kathy Bunka and Isabelle Savard prepare to cook up a storm, in a 2012 series Cooking with Ambassadors. (Source: Jana Liptáková)
Font size:A-|A+160

I was privileged to have a longer-than-normal diplomatic assignment as Canada’s Charge d’affaires in Slovakia. Five years has gone by so quickly.  And if I had to sum up my impressions, I would say:  so much has changed and so little has changed.

I will explain. On arrival in 2011, I sought out some services that didn’t exist at the time. For example, I wanted to order fresh sushi by phone to my flat, and I wanted to hire a dog-walker so that 14-year old Shindig could get more exercise when I was working long hours.  Five years later, there are so many providers of these services. In general the start-up community is dramatically more active and there are signs of new entrepreneurial activities wherever you look.

At the same time, there is still so much administration involved in starting a business. And, well, corruption and law enforcement area sensitive topic everywhere in the world.

When speaking about plurality and diversity in Slovakia, the Bratislava PRIDE parade resumed in 2016 after a break related to the 2015 referendum on the importance of “traditional” family structures.  Over 2000 people took part in what was a joyous celebration in the streets of Bratislava. Despite the counter-demonstrations, I can see that Slovak society is becoming more comfortable with same sex couples and non-traditional lifestyles. People increasingly realize that there is nothing to lose and everything to gain by accepting others for who they are. Alongside my diplomatic colleagues, I signed a letter of support stating that annual Pride events will contribute to promoting positive changes in societal attitudes towards LGBTI persons and to building more inclusive societies.

On the other hand, legislation is not yet in place to provide the same rights to people regardless of their sexual orientation: taxation and employment laws need to adjust to the new reality.The dribble of tourists passing by the Embassy Office of Canada in the summer of 2011 has turned into a flood: tourism is growing at phenomenal rates.  GOOD IDEA Slovakia to brand the country and to host international events which showcase the beauty of the Old Town, the infrastructure, parks, rivers and wildlife, a rich culture and strong traditions.  Slovakia’s visibility in Europe and in the world has grown considerably. A New York Times travel article about Bratislava printed in March 2012 was entitled, “A Vienna Getaway Minus the Crowds”.  Presumably, the author of the article wanted to use Vienna as a hook to get people to read the story.  But early in August this year, Bratislava made the headlines with a Times story titled, “A Renewed Cafe Culture Perks Up Bratislava’s Old Town”.

The challenge here is that few tourists venture beyond Bratislava and they miss Slovensky Raj, the Tatras, Mala Fatra and hundreds of other beautiful sites further east.

Leaving Slovakia is not easy. Professionally, at the Embassy Office in Bratislava, we achieved what we set out to achieve: wider awareness of the soon to enter-into-force Comprehensive Economic and Trade Agreement (CETA) and an active trade and investment relationship between Canada and Slovakia. Canadian companies now employ over 3000 Slovaks, making a significant contribution to the Slovak economy.  Canadians and Canadian-Slovaks have been well-served by the consular program and Canada’s presence has been visible.    Personally, all I can say is that I’ll be back to spend Christmas in Slovakia. So it’s not good-bye but rather, farewell for now.

By Kathy Bunka, the outgoing Canadian Chargé d’Affaires in Slovakia