The proposal needs to be supported by at least 90 MPs. 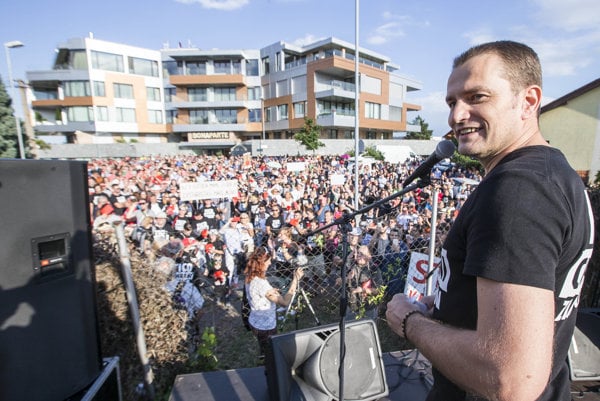 Chair of the Ordinary People and Independent Personalities (OĽaNO-NOVA) Igor Matovič may be stripped of his parliamentary mandate as he has allegedly renewed his self-employment licence. If it is confirmed that he violated the constitutional law, the parliament may try to dismiss him from the post.

To do so, at least 90 deputies will have to support the proposal. Both Smer and the Slovak National Party claimed they are ready to vote for Matovič's dismissal, the Sme daily reported.

The first to point to the alleged violation of the law were Alena Krempaská and Peter Weisenbacher, activists from the Human Rights Institute and former organisers of the so-called Gorilla protests.

They have already filed a complaint with the parliamentary committee for incompatibility of posts. The activists claim that the business is called Mgr. Igor Matovič - regionPRESS.

“It’s the same firm due to which legislator and businessman Igor Matovič was in trouble in the past, and now he’s trying somehow to get rid of a fine worth around €12,000,” Weisenbacher claimed, as quoted by the TASR newswire. “It’s the very same company.”

Both activists called on Matovič to take political responsibility.

“It’s outrageous that MP, businessman and public official Igor Matovič exploits such practices while he keeps denigrating his political opponents,” Krempaská added, as quoted by TASR. “But we can see that he’s renewed his licence.”

The parliamentary committee previously dealt with Matovič’s licence and imposed a fine on him of six monthly salaries, which adds up to approximately €12,000. He received the fine because his business licence was active for 21 days between August 10 and September 2 in 2013, which is punishable by law for an MP. Matovič claimed that he will appeal the fine to the Constitutional Court.

He told TASR in April that a person can suspend his or her business licence only for a period of three years, and he did so twice – in 2010 and in 2013. However, there was a period of 21 days between the end of the first suspension and the beginning of the second one.

If the parliament scrapped Matovič of his mandate, it would be a precedent, said non-affiliated MP Miroslav Beblavý, who said that only former mayor of Zemianska Oľča lost his post for a similar violation of law, as reported by Sme.

The daily meanwhile pointed to the previous incident between Matovič and the two activists. Both Krempaská and Weisenbacher attended the September 5 protest in front of the Bonaparte residential complex. Krempaská was later attacked by two aggressors and ended up in hospital.

The activists claim that Matovič was inciting the crowd against them. If there had not been police, people would have attacked them right in front of Bonaparte, they claimed, as reported by Sme.