The end of a newspaper

The downing of Népszabadság is another blow for media freedom in Hungary, where things that are incompatible with democracy have been happening for a long time. 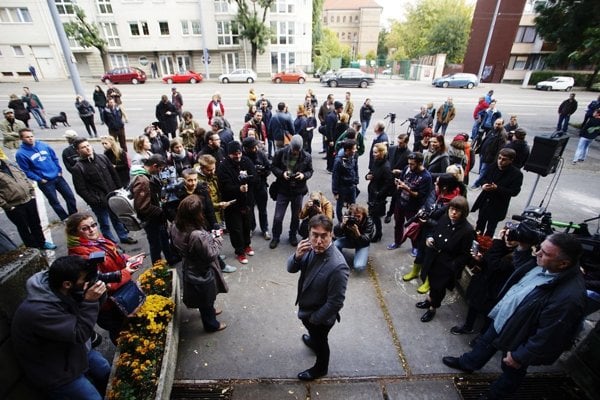 Major Hungarian daily Nepszabadsag has stopped publication on October 8. The news came out of the blue even from its editorial staff who found themselves barred from the building on Saturday morning. They allege the government of Viktor Orbán could be behind what they called the "coup". (Source: TASR/AP)
Font size:A-|A+25

The state of media freedom in a country is measured by their courage to criticise the most powerful. And to survive - not to be fired, dissolved, sold out, or consolidated to the bone.

In our region, the enemies of media freedom do not shoot journalists any longer. Instead, they have an economic gun in their hands. They buy the media, or choose owners that will put the rebels in their place.

Media can only be really free when it is able to earn its living. But it is not your usual company - a farm, a meat packer, or a chain of pharmacies.

The trust in journalists and the media is fragile and if those who hold power destroy it, they open the door for liars, conspirators, and manipulators of various kinds who will erase the truth from the surface of the country. For good.

The Central European region needs critical media more than ever before, as well as journalists with integrity.

The downing of Népszabadság is another blow for media freedom in Hungary, where things that are incompatible with democracy have been happening for a long time.

Hungarian PM Viktor Orbán directs attention to the refugees, but with his politics of fear-mongering he deprives his critics of their feelings of security and home, including journalists.

Journalists of Népszabadság were not aware just a couple of days ago that they would not finish and publish the articles that pointed to corrupt practices of the government of Orbán.

The Sme daily and The Slovak Spectator express solidarity with all the journalists who, as a result of their criticism of Orbán's government, lost their jobs or were prevented in some other way of doing their job - pointing to corruption, lies, and lawlessness.