Daniel Lipšic objects to steps taken by police and their witnesses. 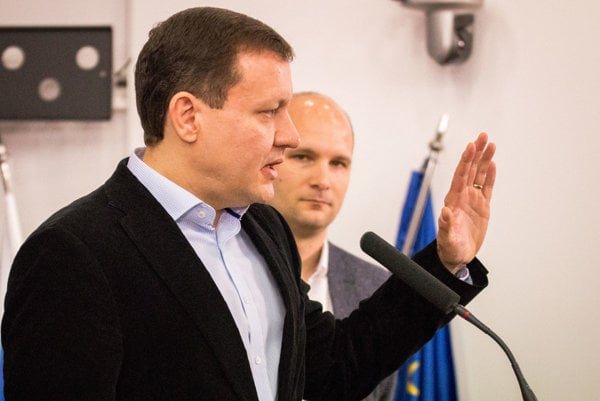 Former MP for the Ordinary People and Independent Personalities (OĽaNO-NOVA) Daniel Lipšic and his party colleague Gábor Grendel have submitted a complaint on the charges imposed on them for revealing the details about bank accounts of businessman Marián Kočner.

“The investigator’s explanation is based only the transcription of the criminal complaint submitted by Marián Kočner and the Penta financial group and is politically formulated,” Lipšic claimed, as quoted by the Denník N daily.

All measures the police have carried out until now have allegedly been invalid as the case has been supervised by prosecutor Bystrík Palovič, Lipšic continued. He stressed that the prosecutor is biased as he has links to tycoon Ladislav Bašternák who does business with Kočner.

Moreover, Palovič is biased also against Grendel as he prosecuted the MP shortly before the municipal elections in Bratislava, where Grendel ran for the post of Old Town borough’s mayor. Though the General Prosecutor’s Office later scrapped the charges, Grendel lost the vote by 26 votes, Denník N wrote.

Read also: Kočner is behind charges against Lipšic Read more

“The investigation file indicates that the only witness who claims that all journalists present at the press breakfast had access to proofs related to the unusual business transactions in Privatbanka is former journalist Júlia Mikolášiková,” Lipšic wrote in his complaint, as quoted by Denník N, describing her as untrustworthy.

Another journalist, Martina Tvardzíková Ruttkayová from the Plus 7 Dní weekly, recently testified against Grendel. She also gave the investigator the documents she had allegedly received from Grendal.

Lipšic wrote in the complaint that Tvardzíková Ruttkayová testified also on the motion of Kočner who mentioned their 2012 interview, where she asked him about the Privatbanka case, during his testimony on August 10, 2016.

“Kočner did not say why he did not remember the interview sooner,” Lipšic continued, as quoted by Denník N. “One of the reasons may be that at the time the reward at €100,000 for providing information discrediting me had not been announced.”

Since the documents which Tvardzíková Ruttkayová gave to the police also contained files created at the time Lipšic did not serve as the interior minister, she could not have received them from Grendel who at the time served as his spokesperson, Lipšic claimed.

He also pointed to the fact that the journalist is currently working for Plus 7 Dní which is owned by Penta. Her partner is former agent of the Slovak Information Service (SIS) intelligence agency Peter Tóth, who allegedly is in contact with Kočner, Lipšic said, as quoted by Denník N.