During the whole Christmas season, the schedule for city transport in Bratislava will be changed; other Slovak cities tend to change it, too. 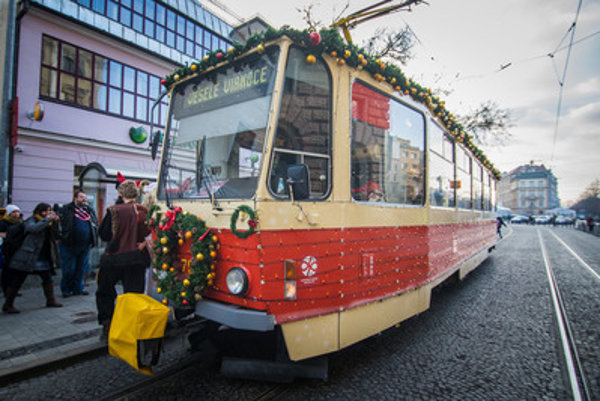 On December 23, the schedule will be switched to a school vacation type, to last until January 9.

A big change is planned for Christmas Eve: the buses, trams and trolleybuses will travel normally until 17:00, with the night buses starting from the Main Station at 18:30, the SITA newswire wrote. These will carry passengers until 06:30 the next day. On December 25 and 26, the city transport will be organised according to the weekend and holiday regimes.

This also goes for the last day of the year, December 31, but a special New Year’s Eve Run will close off the traffic between 10:00 and 11:00 in Rázusovo nábrežie near the SNP Bridge. During the evening celebration, traffic will be excluded from the historical centre, and between 23:30 and 02:00, there will also be a diverted route for night buses. From 23:30 on, the selected night buses and trolleybuses will be boosted, until 6:30, as well as the night trams N5, N8 and N10.

New Year and January 6 – the Epiphany –will run on a weekend schedule, while the days in between will be perceived as workdays during school vacations.

The normal regular schedule will be resumed on January 9, SITA summed up.

In Košice, the holiday schedule will be effective between December 23 and January 8, with the Christmas days and New Year being organised as weekend days. However, Sunday buses and the school line No Š1 and university tram R4 will not be dispatched, the newswire wrote. Bus lines 11, 20L, 25, 26P and 29 will not travel to schools, and line 10 will end at Lunik VIII. Bus No 23 will be limited to once an hour, and once in two hours on weekends.

It is advisable to check on holiday schedules in other cities, too.