RegioJet to leave the Bratislava-Košice route

The reasons include free travelling for students and pensioners and the return of state IC trains.

One of RegioJet's trains in Bratislava. (Source: SITA)
Font size:A-|A+

Czech private carrier RegioJet has announced plans to stop dispatching its IC trains on the route between Bratislava and Košice as of January 31, 2017. It should not influence the trains on other routes.

The company points especially to the decision to re-introduce the state IC trains operated by ZSSK carrier as well as free travel for some passengers. As a result, the market does not operate in a standard way and it is not possible for more carriers to do business and offer services on this route, the company informed in a press release.

The state IC trains returned to the Bratislava-Košice route in mid-December 2016. RegioJet claims it happened at the time more than half of passengers were travelling by train for free. The decision did not result in the arrival of any new passengers – ZSSK trains only took part of the already cut group of passengers at the most lucrative stations, according to the carrier. 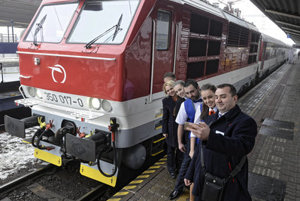 It even accused Speaker of Parliament Andrej Danko (Slovak National Party), who proposed the return of the trains, of fulfilling his pre-election promise to make RegioJet leave Slovakia.

“ZSSK has been operating its IC trains with high losses for 20 years, though it had a monopoly in the market, the fares were higher and there was no free travel in express trains,” the company wrote in the press release.

The carrier doubts the state IC trains will appear in black numbers under current conditions as their capacity is not fully exhausted except for rush days, i.e. Fridays, Sundays and Christmas holidays.

“The re-introduction of IC trains has worsened the economy of RegioJet,” Jančura said, explaining that it ruined the company’s plans to achieve a balanced budget in 2017, which would be enough to stay in Slovakia.

The decision to leave the Bratislava-Košice route will also impact some 100 people who work on it. The company plans to offer them jobs on other positions and routes it currently operates.

The only way to solve the current situation would be the change to the system of free travelling in order to enable commercial trains to address passengers using this benefits. If the state paid about one half of the amount necessary for compensating free travel in subsidised express trains, RegioJet would be willing to pay the rest.

“Thanks to this the state would save one half of costs it currently has on compensating free travel, and students and other social groups would be allowed to travel for free in all trains without any difference,” the company wrote in the press release, adding it is ready to discuss such a proposal.

In case it is accepted, RegioJet would change its decision and return to the Bratislava-Košice route.

The carrier promises the departure of the main route in Slovakia will not impact its other activities. It still plans to develop the connection from eastern Slovakia via the Czech town of Ostrava to Prague, and also establish a new line between Bratislava, Brno and Prague.

The Transport Ministry has meanwhile stated that it is ready to talk with RegioJet on resuming its service on the route.

“It’s possible to reach other solutions than those presented in advance by the media,” the Transport Ministry’s communication department informed the TASR newswire.