Living in a freezing hole

The Herman family survived the winter of 1944-45 in a freezing hole under a haystack. 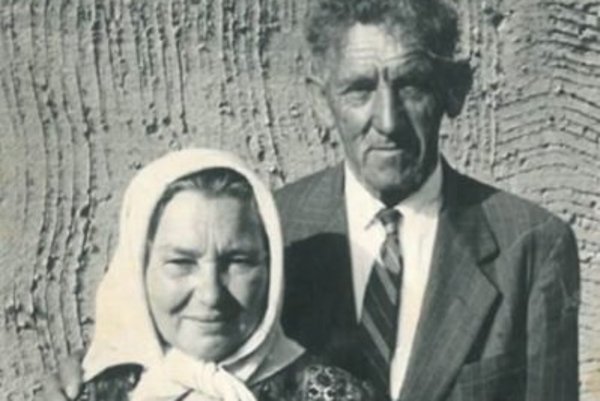 František Svrbický and Gizela Svrbická (Source: Archive of Embassy of the State of Israel in Slovakia)
Font size:A-|A+

Fanny Schlosserová got married in April 1940, at a time when the persecution of Jews had already commenced.

“In 1941 our son Herman was born to our great joy. On the other hand, because of the hard times, it was a great worry, as well”, Schlosserová said, as quoted by a press release of the Embassy of the State of Israel in Slovakia.

In 1942, it was to be determined which families were to be deported to concentration camps. Both parents and all four of Fanny´s sisters were deported and died in the same year.

“My whole family was among the deportees, except for my brother Herman Grünwald who was already in a labour camp. Me, my husband Izidor and our son Herman were also to be deported but we managed to escape to the woods in the vicinity of our village, Poruba pod Vihorlatom. We were hiding there till September 1942. Then we managed to return to our home,” Schlosserová said.

Later, Fanny´s brother Herman joined them, as he had managed to run away from the labor camp and escape being transportated to a concentration camp. As it was dangerous to hide a deserter of a labor camp, he decided to leave and go to Ungvar in Hungary, where he was hidden by a distant relative until the German occupation of Hungary began in March 1944. He decided to flee the house and run away again. He wandered the forests for about eight days without food, so he decided to illegally cross the border back to Slovakia and return to his sister’s house in Poruba.

In April 1944, the Slovak government decided that all Jews who lived in the eastern part of Slovakia were to be brought to labor camps in western Slovakia. Based on this decision, the Schlossers and Herman Grünwald were sent to the labor camp for families in Zemianska Kerta, close to Hlohovec, where they worked as farmhands or in the kitchen. In August 1944, the labor camp was surrounded by German troops and that meant either a concentration camp or death. So the Schlossers with Grünwald decided to risk it and run away.

“Even though they were shooting at us, we escaped without any harm”, Schlosserová said. “We were lucky, we hid among tall tobacco and corn plants with no idea of our whereabouts.”

A few days later, being lost all the time, without any food or water, and with their clothes torn to pieces, they met a man and asked him for help. Especially for their little son Herman, who was starving and exhausted.

That man was named František Svrbický. He lived in the neighbouring village of Rišňovce. He took them to his house and secretly let them stay overnight. They were given a hot meal prepared by this very kind-hearted family.

“They wanted to help us, knowing they were risking their lives to save us,” Schlosserová said. “He promised he would do all he could to help us.”

Svrbický owned a small grocery store in his house. He dug a hole under the counter where Izidor, Fanny, and Herman stayed hidden during the day. At evenings when the store was closed he pushed the counter away and they could move around a bit. Almost three-year-old Herman did not squat in the hole, he lived in the house and the store’s customers were told he was their little nephew who came to visit.

One day, Svrbický told the parents that they had to leave and disappear quickly because rumours had started spreading around the village that he was hiding Jews at his house.

“We were scared and anxious and pleaded with him to at least save our son Herman,” Schlosserová said. “We told him we were willing to report ourselves.”

Living in a haystack

Svrbický was very kind and thought of another way to help them. He proposed to take them secretly away from the house at night and led them far away from the village to a field with huge haystacks. He dug a hole for an entrance in one of the haystacks and then a space of approximately three square meters.

“We were just lying there, three adults and a child in the dark”, recalls their son Herman Grünwald. “We had a candle but we lit it only for a short time when the child woke up. We could not stand up as the hole was only about 75 cm high.”

Svrbický came once a week at night and brought them water and some cooked potatoes.

“Our situation was inhuman; we thought we would not survive, especially when it started to be even colder,” Herman says. “We had no warm clothes, no blankets; our secretions basically froze right around us.”

They stayed there living in a haystack from December 1944 till April 1945. On April 1, Svrbický unexpectedly came early in the morning and said that they had to abandon the haystack as the Germans were on the retreat and were setting fire to everything.

“We came out of our hiding place exhausted, sick and weak,” Fanny Schlosserová states in her testimony. “Our feet could not hold us as they were frozen.”

Svrbický took them back to his home. Their health was critical, they were very weak and suffering from depression. Approximately one month later, in May 1945, they were able to return to their home in Poruba pod Vihorlatom, but only to find out that the Germans had burned their house to the ground.

Wounds from the past

Inhuman conditions have left permanent marks on both the physical and mental health of Izidor, Fanny, Herman and little Hermann. They suffered from cold burns, coxa injuries, circulatory and heart problems.

“For a long time after the war I suffered from horrifying nightmares and hysteric disturbances,” Hermann says. “Even today I still tend to get nervous and hysteric and I still get nightmares of that dreadful time and wake up all in sweat.”

Later, Fanny´s left leg had to be amputated. After many attempts to leave Czechoslovakia in 1969, the Schlossers succeeded to move to Sweden and Herman Grünwald with his family decided to find a new home in the US.

“I am still lucky, because I am alive,” Hermann says. “If you try to think about how many Jewish children born between 1940-45 remained alive after the end of the war, the numbers are not high.”