PM Fico: Fascism is not creeping into Slovakia but openly present

The event commemorating cruel acts of Nazis during the World War II in Slovak villages became an apt occasion for the prime minister to slam their current inhabitants for electing a fascism-inclined party. 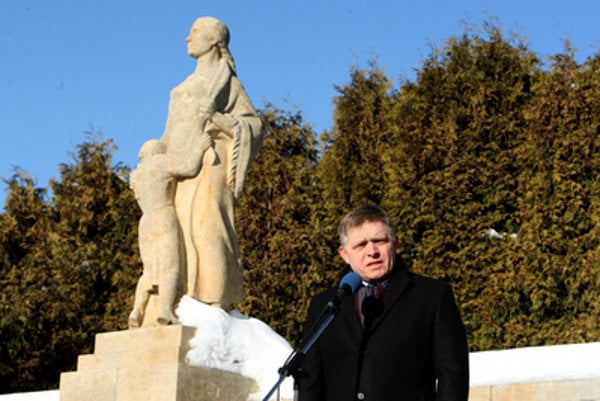 During the January 22 commemorative gathering to mark the 72nd anniversary of the burning down of the villages of Kľak and Ostrý Grúň (both in the Banská Bystrica Region, in central Slovakia), Prime Minister Robert Fico addressed harsh words not only to the residents of these villages but also to citizens of the entire Banská Bystrica region.

“Don’t take it as a reproach, but I don’t get it how the man and the party openly avowing fascism could have gained such support in the general elections in the villages where murders and atrocities committed by fascism were so evident,” Prime Minister Robert Fico said, as quoted by the TASR newswire. “In one village it gained 17 percent and almost six percent in the other one,” he noted, alluding to the results of last year’s general elections made by far-right [Marian] Kotleba-People’s Party Our Slovakia (ĽSNS) in the villages of Kľak and Ostrý Grúň.

He stressed the need to speak openly about these things. “Some people say that fascism is creeping here in Slovakia,” he explained. “It’s not creeping here, it’s present here. We have it represented in parliament and it’s enough to look at statements by these people. It’s walking on trains in green T-shirts, talking about a kind of order while only spreading an ideology in the name of that for which it was murdering here on January 21, 1945,” Fico added.

The premier stated that it is enough just to check social networks where you can find calls for hangings and shootings, where lists of betrayers are displayed showing who need to be killed off in Slovakia. He stressed the need to build a strong dam against it and to unite with each other regardless of whether someone is right or left-wing, similar to the Slovak National Uprising, which he called a jewel in the treasury of Slovak history. People can already do so in the regional elections being held this autumn, added Fico.

“We need to halt this experiment, since it has brought nothing but doubts to the Banská Bystrica region,” the prime minister said, adding that each political party and every politician are replaceable. The question is whether they should be replaced by a standard, democratic and value-oriented party or by “something that questions events that Slovakia and the Slovak nation have been based on”, Fico summed up, again adding that people can already build the dam against fascism in the regional elections being held this autumn in Slovakia.