Blog: A potter from Potters' Street

Igor Macák has been practicing his trade for almost three decades. While, many of his colleagues gave up the trade long ago, others moved into creating a more commercial type of ceramic for interior design. 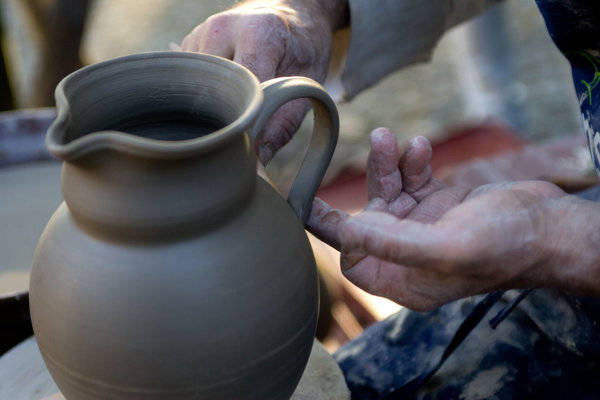 Downtown Košice, Slovakia’s second largest city, there is a street called Hrnčiarska ulica or Potters’ street. It is very narrow with old houses on both sides. The city was the European Capital of Culture in 2013 and, when preparing for this event, city hall decided to rebuild these houses and rent them to traditional craftspeople who offer their products to tourists in street-level shops. One of them is Igor Macák who calls himself the only traditional potter left in Košice.

“I am a potter doing my trade on Potters’ Street”, he says smiling. “I’ll show you how to make a little vase. First I need some clay which I make into a little ball. I usually buy it from villages around and I can say that its price has been going up lately. I dip my hands into water then start this potter’s wheel. I have an electric one. Now I place this ball in the center of the turntable, called the wheel-head, which I rotate with a variable speed electric motor. The wheel rotates rapidly while the solid ball of soft clay is pressed, squeezed, and pulled gently upwards and outwards into a hollow shape. The first step, of pressing the rough ball of clay downward and inward into perfect rotational symmetry, is called centering the clay. It is the most important and often most difficult skill to master before the following steps: opening –which means making a centered hollow into the solid ball of clay, flooring –which is making the flat or rounded bottom inside the pot, throwing or pulling –it means drawing up and shaping the walls to an even thickness, and trimming or turning -removing excess clay to refine the shape or to create a foot.”

Igor Macák has been practicing his trade for almost three decades. He studied pottery at a famous school in Modra, now closed. While, many of his colleagues gave up the trade long ago, others moved into creating a more commercial type of ceramic for interior design. Together with his wife he has developed a personal style of decorating ceramics with herbal motifs, fish and vines. He finds inspiration in the world of traditional craftsmen from the Gemer region.

“I have stayed in this field because I like it,” he says before turning to a shelf to continue the improvised “guided tour” of his shop “Look here I have some shaping tools such as paddles, anvils, and ribs.”

During the economic crisis that began eight year ago, the number of tourists stepping into his shop decreased, but when Košice was the European Capital of Culture there were once again tourists on the streets of the city and many were searching for a nice souvenir on Potter’s Street.

The potter turns towards his main object of attention – the little vase he was working on.

“Ok, now it is ready, so I take it from the wheel using this wire. You see I have to do it twice because it’s still stuck on the wheel a bit. Now this vase has to be left to dry for three days, bigger items even for a week or two depending on the season.. Then I place it in the kiln for firing. It needs to be fired at around 1,050 degrees Celsius. Then my wife glazes them by hand.”

Christmas is the high season for Igor Macák.

“We make some angels, candles and other little things that can be given as Christmas presents. We have a loyal group of clients that stop by during the whole year of course, but before Christmas we attract the largest number of buyers out of the entire year.”