How the national emblem appeared – including so far secret communism designs

Even Slovaks often do not know why the national emblem depicts a white double-cross, and not the Kriváň peak, or the design by artist Vincent Hložník. They also do not know why it makes a difference whether it is worn on green background, or on designer clothes. 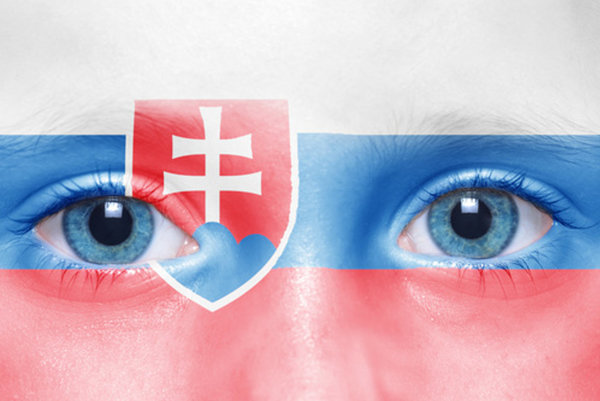 The national emblem, especially the double-cross is used in profusion by members of the right-wing party of Marian Kotleba, the People’s Party Our Slovakia (ĽSNS). However, there is a snag: the symbol they use and the way they use it represents something completely different to the official Slovak emblem.

“From a graphical point of view, it is the cross of Hlinka’s Guards, the paramilitary organisation of the totalitarian Hlinka’s Slovak People’s Party, built according to principles of the SS units,” expert in heraldry Ladislav Vrtel says. “Such a double-cross with bars that are equally long is in fact a Slovak hooked cross or swastika. This is how it was explained during World War II and this was its role. It is just that the nation’s memory is too short.”

His memory is – in contrast – very reliable, and he knows a lot about the Slovak national emblem. He has been dealing professionally with coats of arms, their development, use and the artwork used for their creation since 1979 when he became the secretary of the heraldic committee. Today, he is the state advisor for heraldry at the Interior Ministry. It was he, together with painter Ladislav Čisárik Junior, who in 1990 made the version of Slovak national emblem which is known today as the white double-cross, on three blue hills, on a red background – and which is, since January, part of the united identity of all ministries.

When looking for a model to draw from, they agreed that the best way to get inspiration was to examine the oldest seal in which the double-cross on three hills appeared. “The prettiest sign is always the oldest one – apart from being the most historical one, it is also the purest. Since then, things have only got worse,” Vrtel says. 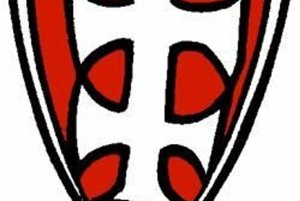 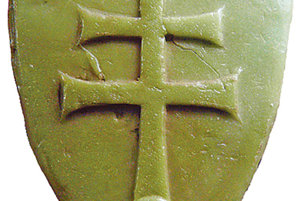 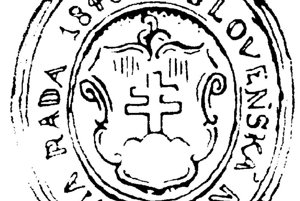 Thus, we went back to the 9th century when the oldest appearance of the original Bazyntine double-cross in our territory is estimated. It was at the time when the evangelical brothers Constantine and Methodius arrived from Thessaloniki but it also appears in the 11th century, a the time when Nitra was the residence of the rulers of one third of the kingdom and at the end of the 12th century when King Belo II, having grown up at the Byzantine court, came to the Hungarian throne.

The double-cross on the three hills was depicted on the royal seal by the beginning of the 14th century. The hills under the cross are interpreted as the hills of Golgotha on which the Christ’s cross stood between those of the two thieves.

Later, they came to be interpreted as the thee mountain ranges, Tatra, Matra and Fatra – and in heraldry, the order is interpreted as a winners’ podium – Tatra is in the middle, Matra to the left and Fatra on the right. The emblem with its current colours: white, blue and red, has formed the Slovak national emblem since the revolutionary year of 1848.

During communism, the communist Constitution from 1960 excluded the double-cross from use for the next 30 years as it is a religious sign. The Czech lion in the emblem got a red star instead of a crown, and the historical Slovak sign was replaced by a bonfire under the Kriváň peak.

Historian Radosalv Ragač, who some time ago discovered in the Slovak National Archives designs proposed for the emblem during the communist era, also speaks about the refusal of communist symbols. The designs were drawn by respected period artists; Vincent Hložník, Štefan bednár and Július Lörinc.

“The designs, together with an accompanying letter, are part of the documentary archives of the activities of Josef Lenárt as secretary general of the Central Committee of the Communist Party of Slovakia,” Ragač explains. “By that time, Lenárt had a direct connection to Prague [i.e. the Czechoslovak federal party committee] which then decided about the symbology and he probably brought the designs there to consult them – but as they were not selected, they remained unused.”

The designs were not a part of a tender as we know them today. “It was rather an order by Josef Lenárt, to some selected artists. Vincent Hložník was probably the most active in this, and he was in direct contact with Lenárt,” Ragač commented. 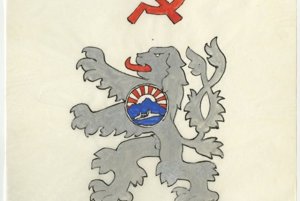 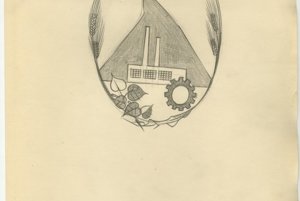 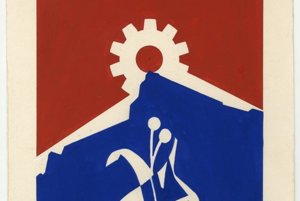 Hložník’s designs are made with a pencil. He used the symbology of the mountains with a modern industrial plant in front of them. With Bednár, Slovakia is symbolised by Kriváň but also by the Orava Dam as the sign of industrialisation. He often uses lime-tree twigs, grapes or hop and lilac – which were used in Prague by the locals to greet the Soviet soldiers after the war – and he is also strongly inspired by the Asian idea of the rising sun which he drew as a cogwheel.

“Štefan bednár is an example of how difficult it is to rank artists in a certain period,” Ragač notes. “During the war, he illustrated diplomas for Hlinka’s Guards, and at the same time, he was illegally quasi-communist.”

The artistic value is hard to assess, according to him, but the designs have undoubtedly enormous historical value, as they document the changes in 1960 in Czechoslovakia which are still little known – as they happened behind closed doors.

“The communists refused the Slovak double-cross for ideological reasons as “outdated”, and connected with the war-time Slovak State,” the historian describes. “According to the assignment, the emblem designs were supposed to express the equality of Czechs and Slovaks, the unified communist state of two equal nations. Paradoxically, according to the 1960 Constitution, Slovakia had a considerably inferior legal position: the system of commissioners and the Board of Commissioners was abolished, the Slovak national Council (i.e. parliament) had almost no competences until 1968 and other national (Slovak) bodies were suppressed.”

The Communists perceived the year 1960 as a turning point: while before, the political system was a people’s democracy, from then on they built so-called socialism, heading towards the ultimate goal, communism. The national symbol should have been “harmonically” connected with this.

“The communist emblem was never really accepted,” Ragač recalls. “When our ice-hockey players won at the World Championship in Sweden, they tried to hide the red [communist] stars from the emblem, and during the November 17, 1989 revolution, the protesters held placards in the squares and streets with traditional Czechoslovak and Slovak symbolic, flags and tricolours.”

“When really daring articles started to be published in Literárny Týždeník literary weekly by the end of 1980s, I wrote a story called the Roots of National Symbolism, about the revival of national symbols, which opened a discussion,” Vrtel adds.

After the congress of heraldists in Ostrava, in 1989, he put together a petition, with five other experts, for the return of historical elements to state symbols. In 1990, after the Velvet Revolution was completed, the discussion on the original attributes to replace the bonfire and Kriváň was not dangerous from the point of view of the communist party and it continued to explore the type of symbols Slovakia would return to. They agreed on the double-cross.

After the non-communist federative Czechoslovakia was established, another task appeared: to create a heraldically right and historically justifiable form of the national emblem of the Slovak Republic and to also solve its representation in the sign of the Czechoslovak federation.

After the political system changed, the issue of the Slovak flag started to be a hot one, whose designs were also prepared by Ladislav Vrtel. “We hesitated about whether to put a national emblem on it but it is good that we have it on the flag, as through the state flag, it best reaches the awareness of the global public,” he opined.

Guess what we wish for the symbol of state

It is only a guess now what people in Slovakia would choose as the symbol of their state. “I do not know any specific research that would explore the symbolic associations of Slovakia in people’s minds but from a sociological point of view, one must stress that symbols get more impressive thanks to the purposeful activities of institutions – by materializing and spreading certain images and by keeping them in the public awareness,” social analyst Zuzaan Kusá says. She continues to say that education and cultural institutions, financial schemes and campaigns supporting the production and reproduction of symbols are responsible for what we perceive as a symbol of Slovakia.

Thus, we can estimate quite reliably what people would think according to the frequency of various images in the public and media environment.

“The National emblem – double-cross and flag, are the candidates for primacy, but also Devín Castle, Kriváň depicted on coins, or the whole High Tatras, the drawing of Jánošík by artists Ľudovít Fulla, or by Martin Benka, could be among the frequent associations,” Kusá opines. “And also people impersonating success or spreading success to the whole country, like cyclist Peter Sagan, could appear there.”

The Slovak emblem with the double-cross is being spread in a positive way thanks to athletes when they win a cycling race, or a slalom. Since January, the unified representation of the emblem in the name of the institution is obligatory for all ministries.

Other ways of spreading

The promotion of the national emblem can also go from bottom up, or informally, as the example of Slovak designer Michaela Bednárová shows, For almost ten years, she has been varying Slovak themes and symbols on her own designer clothing and textile products. To support and keep the tradition of textile creation in Slovakia, she has been producing her goods in the country as well. She cooperated on the clothing for the Slovak Olympic athletes and last year, she created gift products for the president’s office.

First, she tried to bring a new type of souvenir to people which would offer a Slovak symbol in a nice form. In the UK or USA, using flags on souvenirs or small artifacts is common but in Slovakia, it seems to be perceived as slightly controversial.

“When I started using the Slovak emblem, it was connected with excessive nationalism in people’s minds and thus, I often faced sarcastic comments,” Bednárová says, adding that it is crucial not to let oneself be confused with extremist groups using national pride for their own purposes. “It is important that people who claim and defend these values also use official symbols – in the still democratic and free country,” the designer said.

Ladislav Vrtel sees the difference, too: “If the national emblem is also used on utility items – even on a T-shirt or a cap – if one feels a positive approach towards the use of the emblem and to what it symbolises, why would we oppose it? To the contrary, I am happy about that,” he sums up.

The Justice Ministry claims that the question of whether to use of such symbols is violating the law, is outside their competences but due to the unambiguous character of some symbols and messages used by several movements, it has established from 2017 a special expert department to focus on extremism.