Road infrastructure has the biggest impact on building activities. 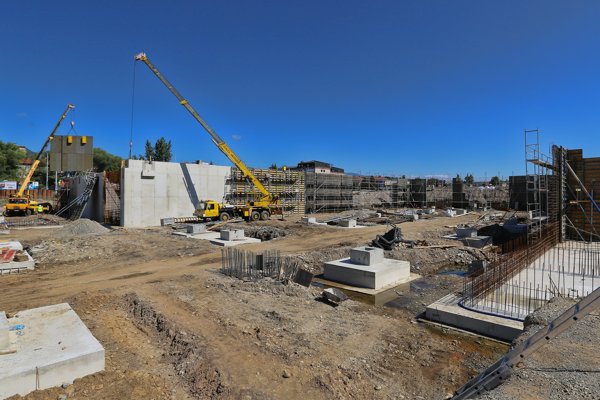 After the construction boom in 2015 boosted mostly by the ambition to use money allocated from the European Union funds in the previous programming period, the sector witnessed a significant decline in building activities in 2016.

“The situation in the Slovak construction sector is unfavourable, especially due to a continuing drop in construction production and vague perspective of the whole sector,” Pavol Kováčik, chair of the Association of Construction Entrepreneurs of Slovakia, told The Slovak Spectator.

The main reason behind the current situation is the steep drop in engineering construction, which also includes new road projects. Meanwhile, the priorities among individual projects and even some already completed highway competitions are being re-assessed, Kováčik added.

The Transport Ministry refused to comment at this time on the current situation, with its spokesperson Karolína Ducká saying it is waiting for the final statistics for 2016.

During the first 11 months of 2016, overall construction output in Slovakia dropped by 10.4 percent year-on-year, while the revenues of construction firms also declined, by 13.2 percent y/y, said Jana Glasová, analyst with Poštová Banka.

“The annual drop in construction last year was caused mostly by fewer sources from EU funds, as in 2015, the money allocated during the previous programming period had to be used,” Glasová explained to The Slovak Spectator.

The decrease was especially significant in two segments: the construction of non-residential buildings and infrastructure, said Ľubomír Koršňák, analyst with UniCredit Bank Czech Republic and Slovakia.

Additionally, public infrastructure projects currently comprise some 30-40 percent of the construction market in Slovakia, and it will remain this way until the necessary road sections are completed, Kováčik added.

The fact that the situation in the sector is serious is also proven by the drop in the volume of launched public competitions last year – by 39.9 percent compared with 2015.

“If the competitions aren’t prepared, it is very hard to expect an increase in the volume of assigned and already implemented orders in the following quarters,” Jiří Vacek, head of the CEEC Research analytics company, told The Slovak Spectator.

Last year, the only growing construction segment in Slovakia was the sector of residential buildings. This was mostly caused by the positive labour market developments that restored the interest of households in purchasing new property. As a result, construction of new flats started, and real estate prices rose, Koršnák added.

“The demand for new housing was supported by available mortgages as the average interest rates of new home loans dropped significantly and moved the historical lows below 2 percent,” the analyst told The Slovak Spectator.

Moreover, the number of employees in construction companies grew, by 1.4 percent compared with 2015. Nominal wages in the sector also increased 3.4 percent y/y, while real wages were 4 percent higher than in the previous year, mainly due to deflation, Glasová said.

Observers also agree that the exchange of the government after the March 2016 general elections may have had some impact on the sector.

“It takes some time until the new government prepares new projects, which also delays the launch of construction,” Vacek said.

Though the construction of most of the highway stretches was postponed from last year to 2017, the new cabinet continued the projects launched by its predecessor, without making big changes, Koršňák said.

However, to secure some continuity in construction projects even after the exchange of cabinets, Kováčik suggests creating a binding timetable of construction for transport infrastructure.

“The plan of construction that would be observed by all the governments would secure the continuity and development of the construction sector,” he opines.

A recent survey carried out by CEEC Research suggests that most construction companies active in Slovakia would welcome such a timetable, as this option was chosen by 79 percent of respondents.

Moreover, 76 percent of firms are convinced that the timetable would help generate more regular investments. The share of companies focusing on engineering construction was even higher – 86 percent, the TASR newswire reported.

Additionally, since the state is the biggest investor in construction, it should maintain a log of projects to secure steady development in the sector.

Despite the rather gloomy development in 2016, analysts predict the construction sector will stabilise this year. Though in the first few months of 2017 the sector may decline due to the cold winter, the situation will gradually improve, said Koršňák.

The Transport Ministry expects that next year the sector will be impacted mostly by construction of residential buildings, which is also confirmed by analysts. The market for new housing, however, will not grow as much as last year, mostly due to stricter conditions for home loans introduced by the National Bank of Slovakia, which will come into force in March 2017.

In addition, also the construction of non-residential buildings will increase, which is indicated by the high number of building permits issued in the third and fourth quarter of 2016. The impact of building permissions is usually visible only later.

“This means that we will see the signs of recovery in this sector during the first half of this year,” Koršňák said.

Infrastructure construction is also expected to grow, mostly thanks to the launch of several projects like the Bratislava bypass and new railway sections, according to Glasová.

In general, construction companies are optimistic, expecting the sector to grow. There are, however, also certain risks.

“Public orders will have a great impact as it now seems they will decrease this year,” Vacek said, adding that he hopes the government will manage to reverse the trend and launch more competitions.

Another problem may be the lack of qualified labour force, analysts and constructors agree.

“Currently we have about 200 pupils focusing on construction, which is an alarming number,” said Kováčik, adding that nobody else wants to study this profession as it is not very attractive.

This will also impact wages that are predicted to increase not only in Slovakia, but across central Europe.

“As a result, we expect that despite recovering inflation, the dynamics of wage growth will be high and the real wages in the sector will continue growing,” Koršňák added.