The programme in the bar will focus on retro and oldies. 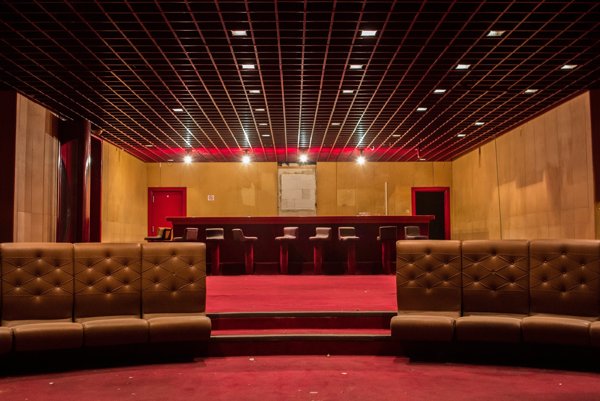 “IT WAS my dream to bring the Luna bar back to life,” said Martin Petrus, the new operator of the legendary bar in the underground of the Kyjev Hotel at Kamenné Square in the centre of Bratislava.

Petrus knows the bar, whose design has not actually changed since its opening in the 1970s during the previous communist regime. At first he worked in the hotel as a student, later he worked for the development company Lordship, the current owner of the hotel. After he agreed with the hotel’s owners upon rental of the bar, he launched its restoration. He plans to open the bar and thus fulfil his dream at the end of March.

Original in a new outfit

Petrus wants to preserve everything original, authentic and still usable in the bar. Though the bar has been closed since 2011 its design has not actually changed since its opening. But he wants to modernise the toilets and extend the bar by turning the original kitchen into a zone for smokers. He also needs to build a new cloak-room because the original wooden one has disappeared. Thus, future guests will also find in the main bar area well-known tapestry boxes or the original bar table.

“In the Luna bar everything has remained authentic, only movable things like chairs and tables have disappeared,” Petrus told The Slovak Spectator.

Even though the design of the lost furniture is known, Petrus does not plan to replace these items with replicas because that would be too expensive.

“We will rather go in the way to preserve the original design, but we will buy new furniture in original colours and style,” said Petrus.

Experts would welcome preservation of the original interior design and furniture in the form the designers used for this project’s space. 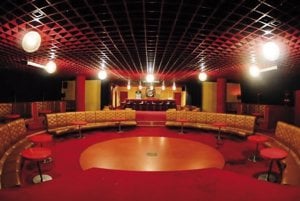 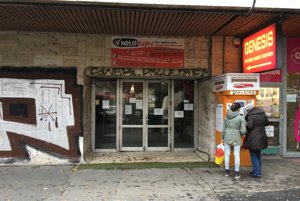 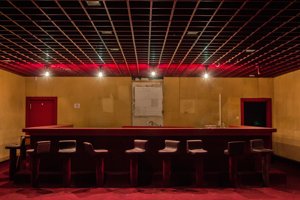 Zuzana Michalovičová, the curator of the furniture collection at the Slovak Museum of Design, recalled that the Kyjev Hotel belongs among the important buildings of Slovak architecture from the second half of the 20th century. One of its creators was architect Ivan Matušík, who worked on it as well as the adjoining department store, now Tesco, with his colleagues.

“We have to perceive the interior of the Luna bar as a complex whole with a distinctive artistic solution characteristic of the 1970s,” Michalovičová told The Slovak Spectator. Round taborets and armchairs were designed and manufactured to fit this space.

Michalovičová also recalled that a sound-light object by artist Milan Dobeš used to be in the bar. Petrus also remembers this piece of art. However, it is no longer in the bar.

“In its place, only a hole remains in the wall,” said Petrus. “If anyone has it at home, in a garage, I would be pleased if he or she would bring it back.”

Oldies style and a retro look

After being extended by the smokers’ area, the bar will have a capacity of about 300-350 people. Petrus would like to draw into the bar those people who managed to enjoy its atmosphere in the past but also younger visitors.

“During a certain period of time the Luna bar was one of the best bars in Bratislava,” said Petrus.

“We will focus on retro and oldies styles as the whole space will remain authentic,” he said. “We will not play any techno or anything similar because this does not fit into this bar at all.”

Petrus plans to re-open the bar in a grand style. He plans the Grand Opening for invited guests for March 31. Afterwards, on April 1, the bar will ceremonially open for the general public.

What will happen with Kamenné Square?

Though Petrus refused to specify how long he has rented the bar or investments he has made into its restoration, it seems that the time period is in his interest.

“Otherwise I would not have gone into it,” said Petrus.

Thus, the plans for resuscitating the bar indicate that the project for rebuilding of Kamenné Square is far from sight for now, even though such plans have been discussed for years.

Kamenné Square, despite being in the centre of the city and close to the core of its Old Town, is far from being a show-window of the capital.

Over the past 10 years there have been several plans put forth for its revitalisation – from its radical, complete rebuilding to a sensitive revitalisation. But none of the plans have materialised.

The developer, in cooperation with the city council, also planned to announce an architectural contest for the future look of Kamenné Square. But this has not happened so far.

Now, Bratislava city council promises to initiate an extensive discussion about the future use of the public space on the square.

The new look of Kamenné Square should result from an agreement between private owners of land, buildings on or near Kamenné Square, and the city of Bratislava which owns the public space on it.

“We realise that to find a consensus on the new look of Kamenné Square will be complicated and that this will require cooperation of all affected sides,” Ivana Skokanová, spokesperson of the city council told The Slovak Spectator. She did not specify the vision of the city council about what the square should look like.

In the meantime, the city council clinched, with the non-governmental Slovak Governance Institute (SGI) and via the so-called national project of participation, an agreement in which it wants to find out for what purposes the public space on the square should be used.

The project should start in April 2017 and will last 18 months, Ctibor Košťál of SGI specified for The Slovak Spectator. One of its results will be an elaboration of background papers for an architectural competition concerning the future look of the square.

Tesco Stores SR, operating the department store, owns some land on the square too. Tesco and Lordship, as owners of 90 percent of the land bordered by Rajská, Dunajská and Špitálska streets, announced in May 2014 the signing of a cooperation agreement, a part of which was an agreement on a joint course during revitalisation of this area.