In praise of concrete

It was once notorious for its drab tower blocks and urban crime, but Petržalka now epitomises modern Slovakia. 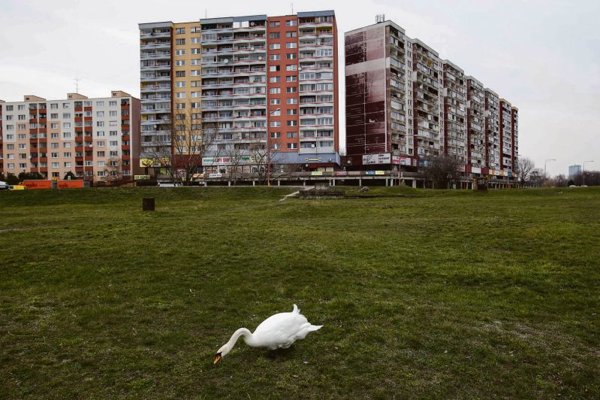 I have recently been spending more time in the lovely garden suburb of Petržalka.

What was once a small German-speaking village on the south bank of the Danube is now more urban than anywhere else in the country. It is part of Bratislava – but would, on its own, be Slovakia’s third biggest city.

Most of it was built in the 1970s and 1980s, but multi-storey blocks continue to sprout.

The first thing that strikes visitors to Petržalka is its relentlessness: serried ranks of residential towers, marching off into the Danube basin. This is the spiritual home of the pre-fabricated concrete block, or panelák.

And boy, did they pour some concrete back in the day.

Sometimes, it seems, they were at a loss what to do with it all: near my own flat is an elaborate and completely superfluous concrete bridge crossing a very quiet road. Dimly lit underpasses would elsewhere be mistaken for bomb shelters, such is the solidity of their construction.

In the early days, twinned with its shabby socialist aesthetic, this did not make for a very appealing environment.

Czechoslovakia’s first post-communist president was moved to comment on its awfulness just days after his inauguration, in his first New Year address, on January 1, 1990:

“Flying to Bratislava recently, I found time during various meetings to look out of the window. What I saw was the Slovnaft [oil refinery] and the Petržalka suburb immediately beyond it. That view was enough for me to understand that our statesmen and politicians had not even looked – or did not even want to look – out of the windows of their planes. None of the statistics available to me would have enabled me to understand more quickly or more easily the situation we have gotten ourselves into.”

But time, the growth of suburban trees, the recent – and colourful – re-cladding of the blocks with insulation, and the thousands of local residents’ pride in their homes have proved Václav Havel’s judgement on Petržalka premature.

The uniform greyness of 1990 is gone, and with it much of the bad reputation that the suburb once struggled with.

The much-derided concrete has provided the foundation for the modern housing and lifestyles to which Slovaks now aspire.

It is now decaying at the edges – one suspects this was the case from day one – and I can personally attest that the wiring and plumbing are as flaky as ever. But what remains are comfortable, sometimes luxurious, homes for tens of thousands of people.

Not such a bad situation after all.